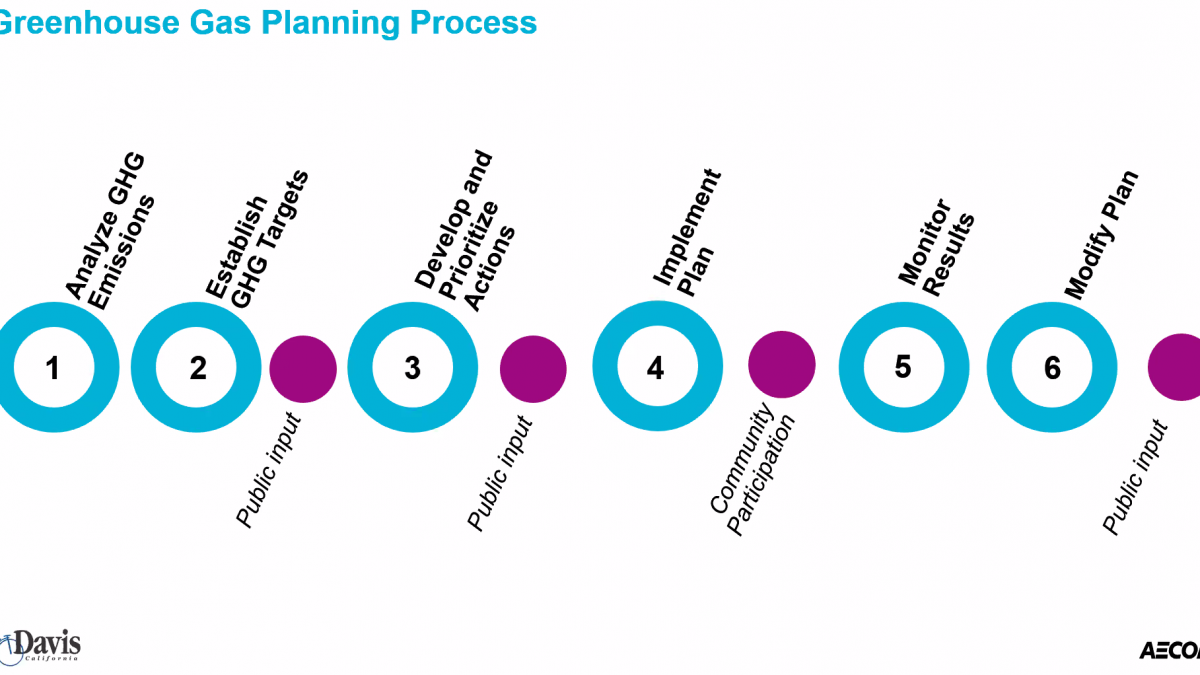 The first workshop for the Davis Climate Action and Adaptation Plan (CAAP) Update process was held online the evening of April 22, 2021, on the 51st Earth Day. As many as 94 participants, including the presenters, were in attendance that night, hoping to learn more specifics and contribute to the process in productive and meaningful ways.

The most newsworthy moment of the workshop was the declaration of the intention to set an interim target for 2030 as a benchmark towards the City’s current carbon neutral goal of 2040. The workshop was attended by several Cool Davis staff members, former Davis City mayor Robb Davis, Greg Rowe, chair of the Planning Commission, and Camille Kirk, UC Davis Director of the Office of Sustainability. Specifics around their contributions and concerns follow.

First steps in engaging the community

The workshop was one of several early steps to engage the community in the Climate Action and Adaptation Plan Update process. Another opportunity takes the form of a currently active online survey.  A series of workshops will follow, some of which will be repeated more than once to maximize community participation. The City is currently convening a Technical Advisory Committee (TAC) and a internal staff CAAP Team to provide oversight and guidance to the CAAP process.  In addition, City staff have convened a group to provide advice on Community Equity and Inclusion. To participate in the CAAP process, please visit the CAAP website regularly for announcements.

City representatives will speak about the CAAP Update process followed by a panel discussion at the next Cool Davis Coalition meeting May 19th 4:30-6:00pm. Read more and register now for this free event!

Be sure to make your opinions and input heard. Survey results and workshop recordings will be posted online.

Visit the City CAAP webpage for more information and updates

The CAAP Update supports recent City Council actions to assess greenhouse gas (GHG) reduction progress made since 2010, identifies physical and social vulnerabilities and opportunities, establishes, and prioritizes climate action and carbon reduction policies toward carbon neutrality, and creates a roadmap to bring the City into compliance with current state legislation as wella as our current 2040 net carbon neutrality goal.

The intention of the CAAP Update Team is to produce an action-oriented, equity-based plan with measurable, enforceable, feasible priorities that have significant community-valued co-benefits, cost effectiveness, and GHG reduction value. 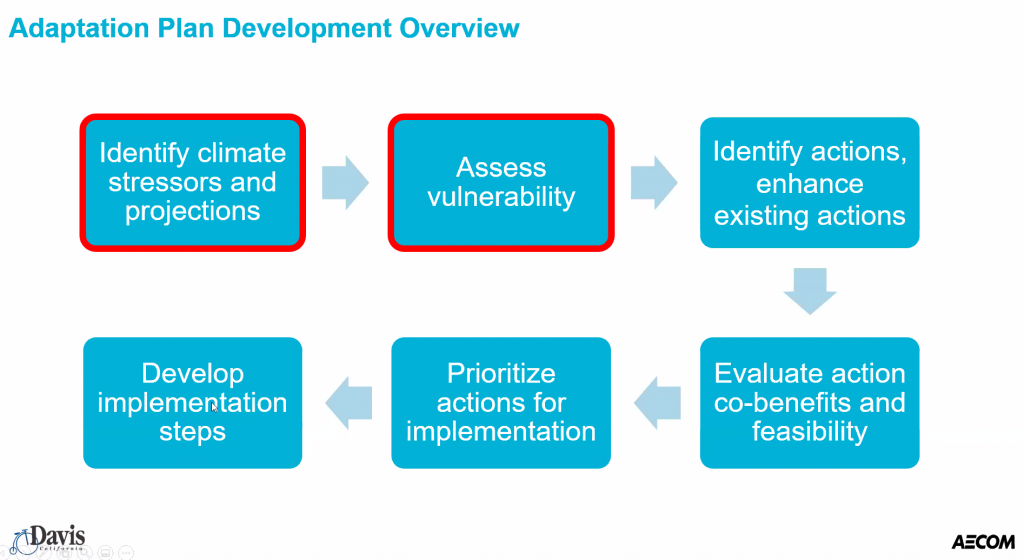 At the first community workshop, Josh Lathan of AECOM presented an overview of the planning process, some information about target setting, existing actions, and parameters for which emissions will and will not be included, citing data from sources such as SACOG and the California Air Resources Board.

Transportation was identified as the greatest single source of greenhouse gas emissions at 74% of the total, which was defined to include trips that either end or originate in Davis but not through trips on I-80.

Climate threats were listed including poor air quality, drought, flooding, and extreme heat. The Cal-Adapt tool was cited as predictive of annually 30-50 more extreme heat days and 4 to 8 heat waves by the year 2100.

Visit the Cool Davis Impacts webpage for data derived from the Cal-Adapt tool specifically for Davis, which confirms these increased temperature and heat wave events.

After the breakout sessions, Diana Edwards of AECOM reported that the vulnerability assessment is currently in draft form and will be available for review within a month. Clarifying questions queried the impact of climate vectors on public health, climate refugees, and messaging about reducing water usage. 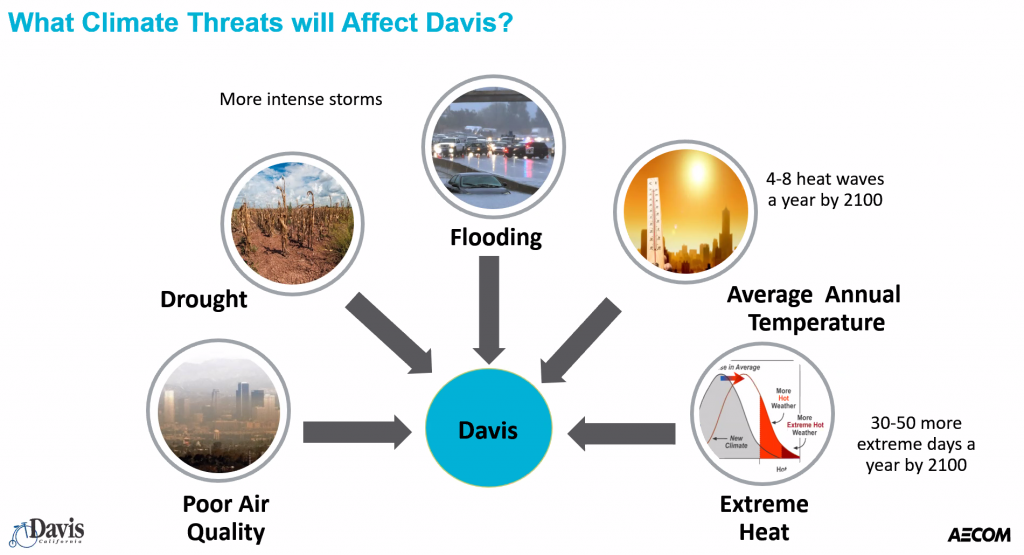 According to the 2010 greenhouse gas inventory, a full 68% of emissions was shown to be generated by households in our community. Since Cool Davis works with households to address their GHG emissions, this datapoint is critical to our work and measuring success. Unfortunately, the current summary of City 2016 GHG data presented at the workshop was not broken down by sector — commercial, residential, and government sectors.  As our community makes progress on building energy, transportation, and consumption actions, Cool Davis hopes to have data that shows the remaining work left to do, how hard or expensive it might be to do it, and who is responsible.

The data also doesn’t currently show the impacts of the university on community GHG. The university calculates its GHG separately and has its own very successful plan for action and adaptation. Partnering with the university should be a part of our CAAP strategy.

One datapoint that was striking was the large portion of emissions from transportation – 74% even in bike-saavy Davis. Cool Davis has been working to increase electric vehicle adoption through scores of Show and Tell and Ride and Drive events in collaboration with working group DEVA (Davis Electric Vehicle Association). We plan to continue that effort in earnest this Fall as part of National Drive Electric Week.

Watch our Drive Electric webpage for great information and updates about the event. 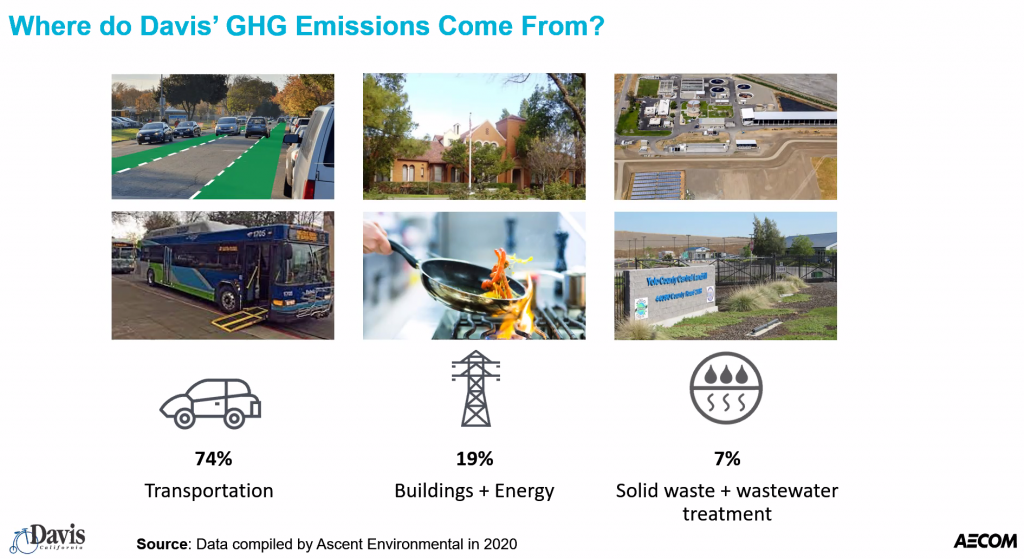 Two breakout room sessions followed the presentations, the first about impacts and adaptations (“How did you handle the [2019] heatwaves?”) and the second about energy and transportation, where participants were asked to share their personal experiences.

Former Davis City mayor Robb Davis raised the equity issue concerning cost for buying an electric vehicle. Greg Rowe, chair of the Planning Commission, expressed concern about requiring all-electric homes. Rowe also expressed his opinion that “dust” blowers should be permanently banned. Leaf blowers were temporarily banned in the fall of 2020 as part of an urgency ordinance aimed at reducing emissions and dust when air quality from wildfires had been unhealthy for days on end.

In terms of transportation, it was mentioned that the existing bus routes in town are UC-centric and a smaller shuttle type service and a downtown-centric route system might better serve all residents. Concerns about the limitations of electric vehicles for trail and hiking adventures was met with ideas about renting tradition vehicles for special occasions. Valley Clean Energy Board member and Cool Davis Coalition Steering Committee member Lorenzo Kristoff suggested weatherization was needed in retrofit situations to protect residents from extreme heat events.

The possibility of a public bank to finance incentives was raised as well as the importance of our local tree canopy and a revisit of the residential resources program to ensure that landlords offer homes with adequate cooling measures during extreme heat. 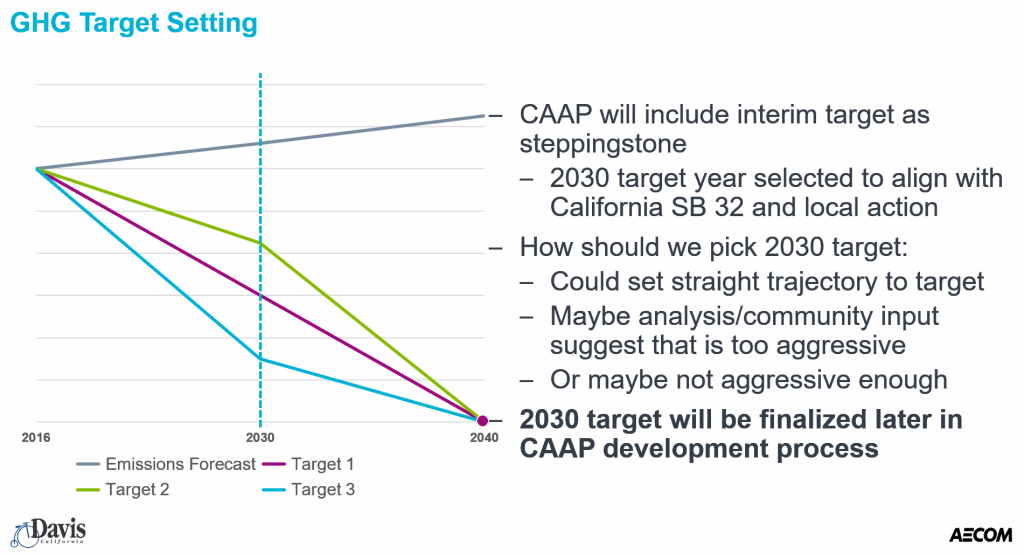 Invest in the solutions

One of the challenges of doing climate action work in our community is that our affluence is a tremendous contributor to GHG and convenience living is a barrier to action. The higher your income, the bigger your share of the problem and the more responsibility you have to invest in solutions.

Cool Davis’s mission is to help all households make informed choices to reduce their impact. But those impacts are not the same. We must protect the most vulnerable and center the marginalized in our community, making sure to address their needs and situations first in CAAP planning. For instance, as part of the City Housing Element update this year, we have an opportunity to address energy retrofits for older housing to ensure healthy yet affordable places to live for people of all income levels.

According to Cool Davis’s Executive Director Chris Granger, “Many of us owe a climate debt to our communities and the world. So beyond getting our solar panels or an EV, we also must allocate significant resources and savings from our actions to go to other people, places, and our progeny. We share in the responsibility to retrofit and restore their share of the environment we have already damaged or depleted! Whether through our share of tax dollars, public banking, or a direct donation to community mitigation funds, we all must participate in mechanisms for collective action.”

Following the workshop breakouts, a whole group discussion raised several issues including local energy generation otherwise known as microgrids, extreme waste during campus moveout periods, service deserts (neighborhoods where food and other basic services are lacking), potential lack of alignment with Downtown Plan goals, and how consumer products will be captured in the plan.

UC Davis Office of Sustainability Director Camille Kirk offered to share the campus Sustainable Practices policy, and author and activist Nick Buxton offered the model of the 15-minute city from Europe, where all basic needs are located within a 15-minute walk from homes. Finally, a point was made that what’s needed is a complete shift in culture that we’re all responsible for, not just the City.

Cool Davis encourages households to participate in the Climate Action and Adaptation Update process by attending events, answering the survey, and giving input. Beyond that, make your own climate plan today!

How much can you and your household get done by 2030? 2040? Can you eliminate fossil fuels from your transportation or from your home energy? What can you do now? What will you invest in for the future?

Contact the City CAAP Team by emailing caap@cityofdavis.org with input and comments.