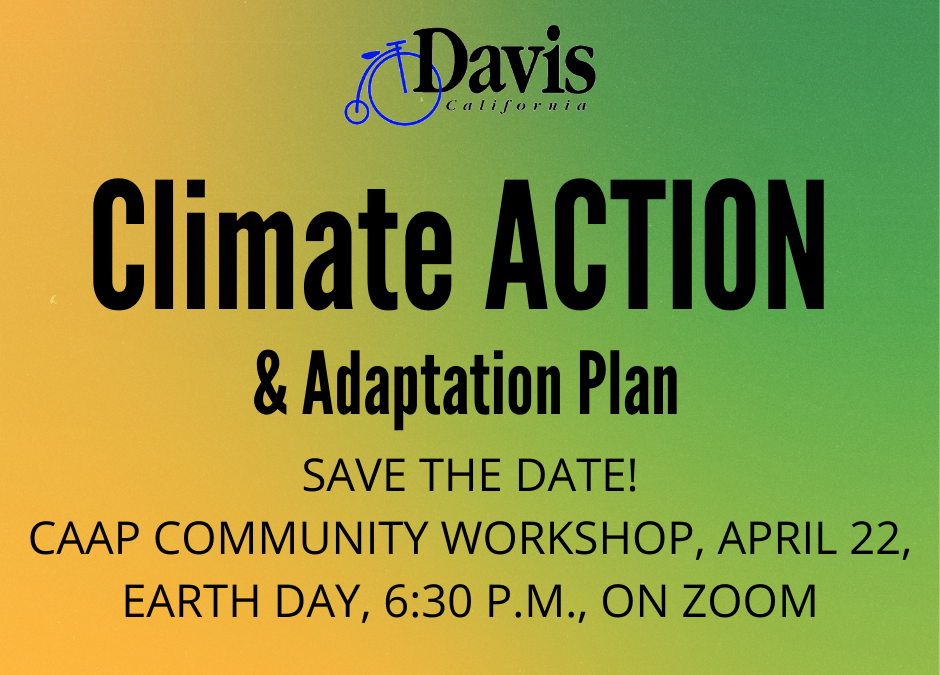 The City has initiated the planning process for the Climate Action and Adaptation Plan (CAAP) Update to the existing 2010 CAAP. For information about this important effort, the process, the timeline, next steps and opportunities for engagement, visit the CAAP webpage.

“We need to hear from the community on this critical community issue,” said Mayor Gloria Partida. “Climate change, which disproportionately affects the most vulnerable people, touches so many aspects of our lives – public health, employment, agriculture, housing, regional planning and transportation just to name a few.”

In March 2019, Council adopted the Resolution Declaring a Climate Emergency and Proposing Mobilization Efforts to Restore a Safe Climate that states that “the City of Davis commits to taking significant action to move toward net municipal and community carbon neutrality in the short term with maximum efforts to implement carbon reduction actions by 2030; and accelerate the existing 2050 Davis carbon neutrality goal to a 2040 target.”

The intention of the CAAP Update and process is to produce an action-oriented, equity-based plan with measurable, enforceable, feasible priorities that have significant community-valued co-benefits, cost effectiveness, and GHG reduction value.

Community engagement will include online surveys and a series of workshops, some of which will be repeated more than once to maximize community participation. Survey results and workshop recordings will also be posted online.

The CAAP project will be developed over the coming year with a projected completion date of December 2021. The project will consult many community stakeholders through the Community Engagement and Outreach efforts. City staff is working with local community members to ensure that the outreach and engagement process provides an inclusive, equity-based approach.

Ultimately, the proposed CAAP update will be derived and presented to the City Council for their consideration for adoption at the end of the year.

In March 2019, the Davis City Council adopted the Resolution Declaring a Climate Emergency and Proposing Mobilization Efforts to Restore a Safe Climate, which states that “the City of Davis commits to taking significant action to move toward net municipal and community carbon neutrality in the short term with maximum efforts to implement carbon reduction actions by 2030; and accelerate the existing 2050 Davis carbon neutrality goal to a 2040 target. The City of Davis and City Council will…accelerate a robust update to the Davis CAAP and integration with the City’s updated General Plan.”

The CAAP will recommend new GHG emission reduction targets through 2030 that align with Senate Bill 32 and through 2040 to align with Executive Order B-30-15, and other relevant legislation. The CAAP will be the City’s roadmap for achieving our newly established, city-wide GHG reduction goals including key areas of electrification, transportation measures, food and agriculture, water, waste, and actions in other sectors. The updated CAAP will be implementation-oriented with clear strategies to enable the City and the community to achieve or exceed GHG reduction, environmental justice and sustainability goals.

To participate in the CAAP process, please visit the website regularly for announcements for opportunities for workshops, online surveys, commission presentations and discussion and other forms of outreach, and be sure to make your opinions and input heard.

Visit the City CAAP webpage for more information and updates 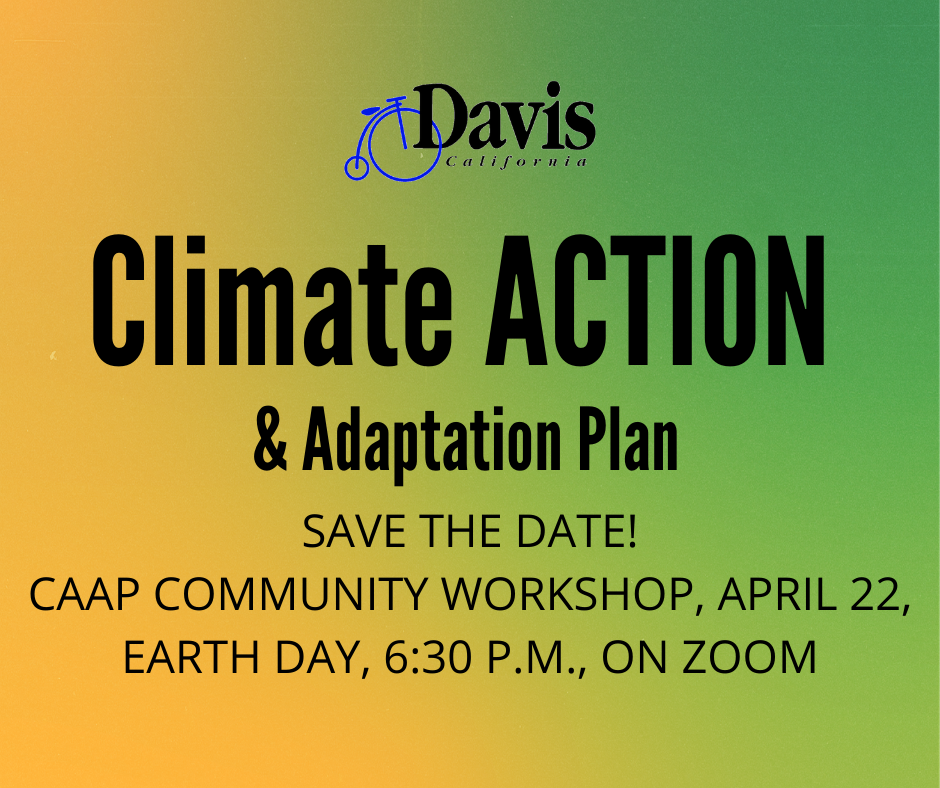