Per Capita Davis: Mother Nature and the Red Queen

This article is crossposted from the Davis Enterprise. I’m offering a couple of thoughts for the new year. One involves Mother Nature, and the other Lewis Carroll’s Red Queen.

First, Mother Nature. The world’s policymakers sat down in Warsaw in 2013 to talk about climate change. Actually, the intention was not to just talk about it, but to do something. This has been happening on a regular basis since the Kyoto Protocol was signed back in 1997. So far, lots of hot air, not much action, and the “results” of the recent conclave in Warsaw continue this rather dismal record of non-achievement.

Consider this, from the official United Nations press release.:“Let us again be clear that we are witnessing ever more frequent extreme weather events, and the poor and vulnerable are already paying the price.”

Followed by this: “Warsaw has set a pathway for governments to work on a draft text of a new universal climate agreement so it appears on the table at the next U.N. climate change conference in Peru. This is an essential step to reach a final agreement in Paris, in 2015.”

And, “Countries also resolved to close the pre-2020 ambition gap by intensifying technical work and more frequent meetings of ministers.”

Finally, “Now governments, and especially developed nations, must go back to do their homework so they can put their plans on the table ahead of the Paris conference.”

Summing up (my words): We have a big problem. It’s particularly troublesome if you are poor or vulnerable. After 16 years of yakking, and even though we know what needs to be done, we can’t agree on hardly anything. What we need is more meetings of ministers. Governments had better do their homework or they’ll have to sit in the corner at the Paris meeting.

I’ve had some experience with negotiating, and I know issues can be especially complex when entrenched interests are involved. But the most cogent thing I heard coming out of the Warsaw exercise in kicking the can down the road (again) was from a dissatisfied participant who warned that, although she was not invited to the conference, “Mother Nature doesn’t negotiate.”

Now on to the Red Queen. While politicians dither, the world keeps moving. One of the most important energy-related developments of the past few years has been the “discovery” of fracking as a source of oil and gas. Supplanting coal with natural gas to produce electricity reduces overall CO2 emissions and some point to this as a bridge we can cross to get from our fossil fuel present to a renewable fuels future. Others say we should just get serious about renewables now; this new source of energy is just a distraction, an environmentally costly one at that, and although natural gas is cleaner than coal it won’t get us out of our climate problem.

But, setting natural gas aside for a moment, what about the oil? It seems those who are excited about fracking as a source of oil mostly cite the issue of “energy independence.” Indeed, the International Energy Agency estimates that the United States could be the world’s largest oil producer by 2020.

Oil is still oil, no matter where it’s produced, so, the argument goes; if we are going to use oil to power our transportation system, we might as well mine it from our own soil. But there are wildly different estimates of how much oil can be economically produced and whether investment in this technology is worth the environmental risks. 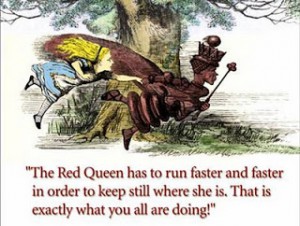 Here’s where the Red Queen comes in, or, more accurately, the “Red Queen Syndrome.” I hadn’t heard of this until a friend pointed me to it, and when I Googled it up came an interesting website: http://climatecrocks.com. This site, called by Treehugger “the sharpest climate denier debunker on YouTube,” collects and distributes articles and information meant to poke holes in arguments of fossil fuel advocates. It’s worth checking out.

Backing up a step, I had to be reminded that the Red Queen is a character in Carroll’s “Through the Looking Glass” who, when Alice asks her to explain Wonderland, responds, “Now, here, you see, it takes all the running you can do, to keep in one place.”

His (and others’) analysis is that wells are petering out much faster than expected, and, to explain the Red Queen analogy, frackers have to drill more and more wells to keep production at current levels, levels that inevitably will decline after 2020.

The website author’s conclusion: “If this news about shale production is correct, the transition to renewables is not only something we should do as moral, thinking beings, it is something we must do as quickly as possible to maintain any kind of civilized society as we know it.”

I admit to being glad to discover that I’m not the only doomsayer.