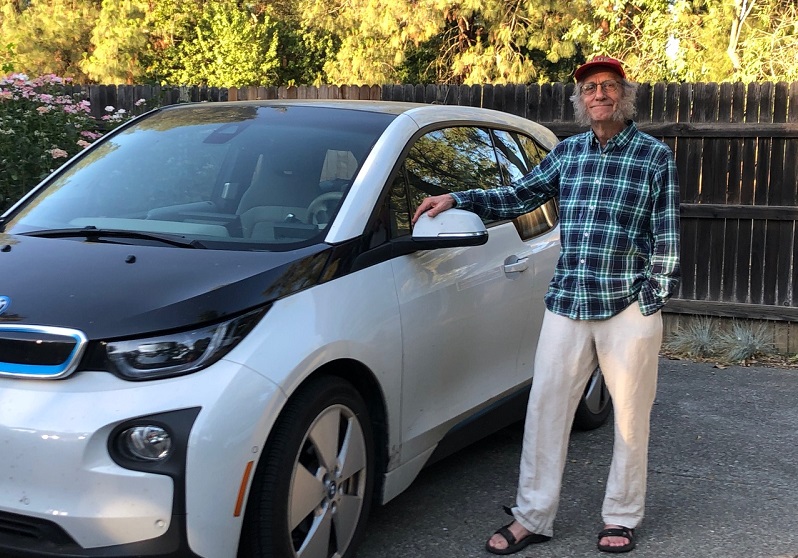 For more about electric vehicles and incentives, visit our Drive Electric webpage.

For Jon Bjornstad, the decision to install solar panels on his home was not necessarily about saving money. He’s not opposed to saving money and not in a position to ignore a good financial investment when he sees it. But from his point of view as a committed environmentalist, installing solar panels was simply the right thing to do. In his words, “I decided to put my money where my mouth was.”

Jon’s first solar installation was back in 2010 on a house in Santa Cruz. In 2014, after moving to take a new job, he repeated the act on a home in Redwood City. Jon retired and moved to Davis in 2017. In 2019, he purchased a home in Village Homes that already had a PV solar system installed which simply saved him the need to “do the right thing” again.

If you talk with Jon, you’ll quickly learn that even though he retired from a job in technology, the technical aspects of solar electric are not of great interest to him. He did not readily know the size of his system. (After some basic research, he was able to disclose that the roof of his home sports 16 Kyocera panels with a total generating capacity of 4.3 kilowatts per hour.)

Learn more about pairing electric vehicles with rooftop solar systems and backup batteries by participating in our Cool Davis Driving on Sunshine Week webinars, video sharing opportunities, and more to be held this coming September 28 to October 2, 2020.

As he says, “When the sun shines it produces more and when it’s cloudy it produces less. Once I figured that out, I wasn’t really interested in spending a lot of time monitoring power production.” Whether sunny or cloudy, installing rooftop solar is still the right thing to do. 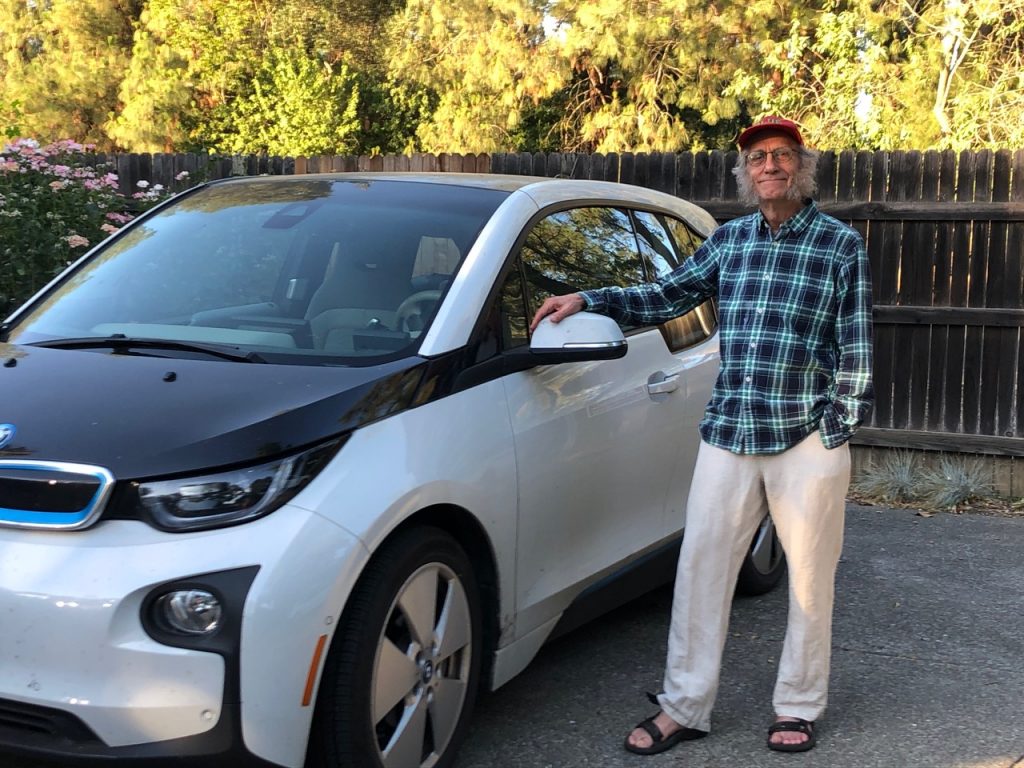 Back in 2014, Jon took another step along the path of positive environmental actions; he traded in his Prius and bought an electric car (EV). Six years is a long time in the evolution of EVs. Way back then, there were only three commonly available choices, the Nissan Leaf, Tesla Model S, and the BMW i-3. Jon chose the latter and still has it. By today’s standards, his BMW has very little range, about 80 miles. Still, it’s a solid little car with a touch of luxury, and it meets his needs.

Jon has named his car Tarry Scoot. It can “scoot” when he wants it to. But with its limited range, it encourages him to “tarry,” not go too far too fast.  He can drive the car to Santa Cruz, stopping two times for 30 minute fast-charging. He has the routine down and knows where he can charge along the route. Jon notes, “The car is very high quality, very quiet, very smooth, very fast, very green. It just doesn’t go very far!” But Jon is prepared to make a small sacrifice in order to do his bit to save the planet.

Jon recently thought he might trade up to a Tesla Model 3. He heard of a lightly used one for sale for a good price. That car, with the performance package, had a range of 300 miles and would accelerate 0 to 60 mph in 3.5 seconds. Quite a step up from the BMW i-3. But Jon did not buy the car and, in retrospect, is not disappointed. He doesn’t think any car really needs to accelerate that fast nor does any human being need to want to. The BMW has only 50,000 miles on it. He has noticed no reduction in range over time and it still mostly gets him where he wants to go. If he ever has to drive a long distance quickly, he can simply rent a car. Jon intends to “be on the right side of history” and thinks that means  driving electric. 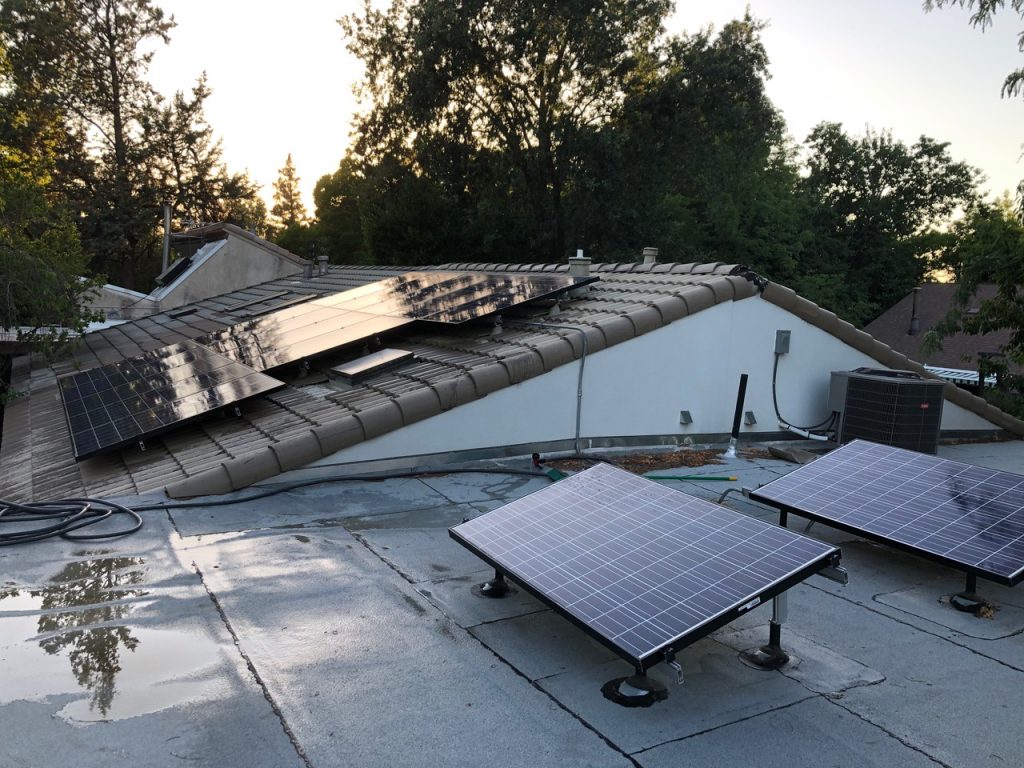 So, Jon and his partner, Tanya Kucak, are settled into an EV/PV lifestyle in Davis. They recently installed a BMW fast charger in their home. Jon dug the trench for the electrical line himself, removing and then replacing a ton of soil (watch this triumphant video of Jon replacing the soil). Rather than take the most direct route, he circumnavigated a small pond with its resident turtle. Jon recently shot a short video, “Driving on Sunshine” featuring his car. You can watch Jon and his car on YouTube with this link.

See both these videos as part a magical mathematical mystery on Jon’s Logical Poetry website named “The Mystery of the Car, the Trench, and the Pond.”

Another step Jon took towards a lighter footstep on the Earth was changing his diet. That happened in stages, starting with becoming a lacto-vegetarian in 1976. At that time, the primary reason was eating a healthier diet. Even contemporary environmental books of the time, such as Silent Spring by Rachel Carlson, did not tie the meat industry to environmental harm. Nor did the much earlier but still relevant The Jungle by Sinclair Lewis, one of the books that convinced him he no longer wanted to support that industry with his money.

In 2005, Jon decided to become vegan, dropping all animal products from his diet. Now the motivation had changed quite clearly to have an environmental component. Jon explains that “animal agriculture has a very large impact on global warming, water usage, pollution, habitat destruction, rainforest depletion, etc.” Motivations can change but still, in either case, he feels he is doing the right thing. For additional information on the environmental benefits of reducing meat consumption, see these links to articles in the Cool Davis archives.

Jon has always been a non-conformist, examining conventions and traditions to see if they still make sense. He tries to maintain a sense of social responsibility and environmental stewardship. His pioneering ideas of generating power for his home with solar panels and coupling that with an electric car are becoming much more mainstream. Early adaptors such as Jon point the way to a healthier and more resilient community. 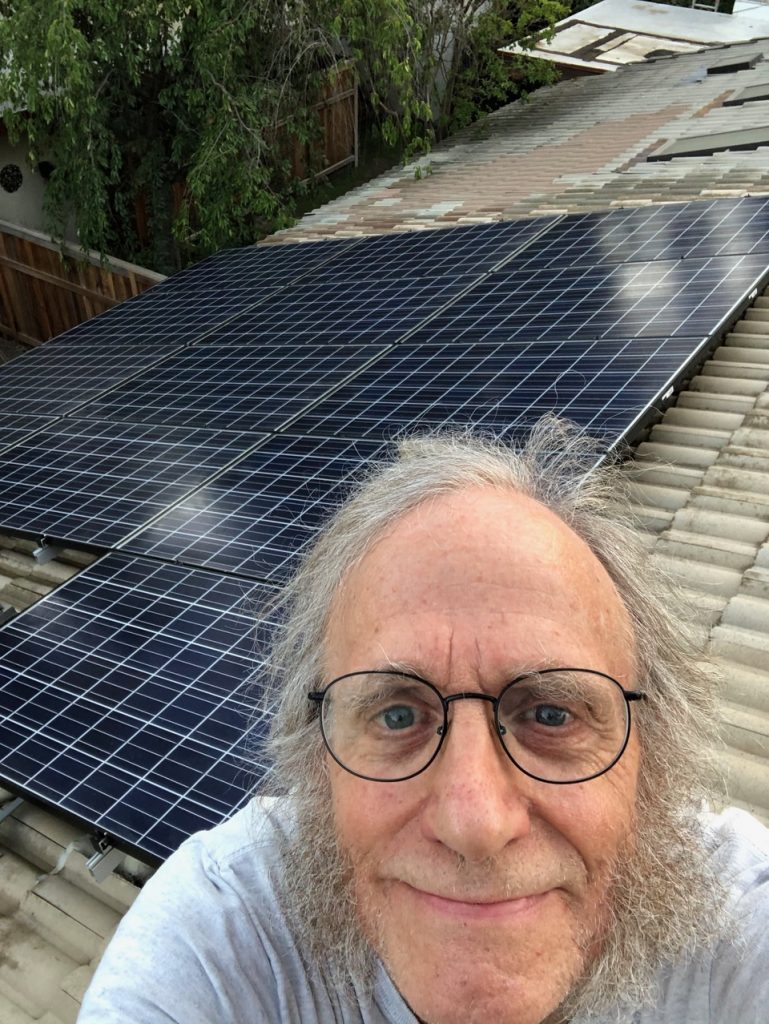