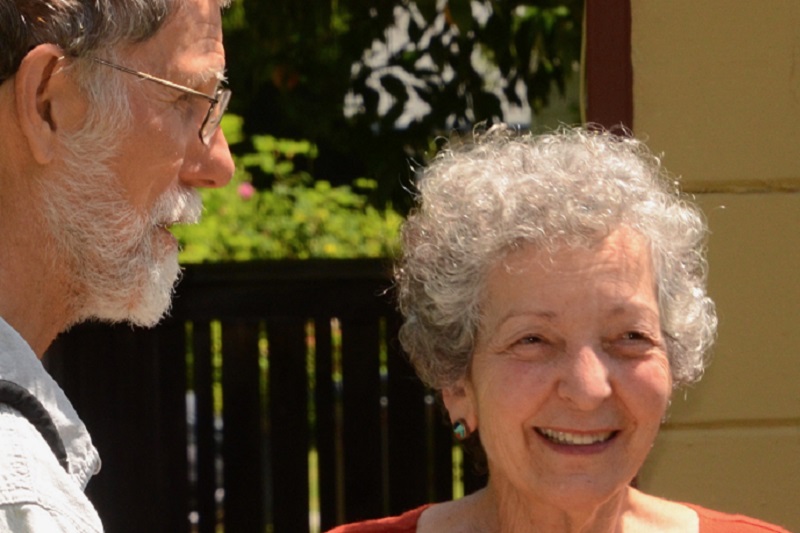 Nancy Bramberg and Richard Curley live in a neat 1950s vintage home on a quiet street in Central Davis. They’re well settled to our community and didn’t need to make any big changes to continue their idyllic Davis life. But, in 2017, Nancy and Richard decided to make a significant impact on the future and the environment by installing solar panels.

The decision to start a bright new day of energy independence began when they had to remove a large tree in the back yard. Rather than lament the lack of shade, Nancy and Richard decided to take advantage of the sun now hitting their roof.

Trees around a residential home are certainly a plus. They add beauty and shade. But when a shade tree must be removed, the impact on home heat gain can be significant. Nancy and Richard decide to reduce that impact somewhat by installing solar panels.

Researchers at the University of California, San Diego, found in 2011 that solar panels can lower a roof’s temperature by 5°F (see link below). Since much of the heat hitting roofs finds its way inside structures, limiting roof heat gain can significantly reduce the need for indoor air conditioning. In fact, the researchers found that the savings from reduced cooling effectively amount to a 5 percent discount on the solar panels’ price.

Go big when you go solar

Nancy and Richard wanted to install the largest system feasible. Available roof space with good solar orientation was a limiting factor. The final design was for a 4.4 kW system, with CanadianSolar brand solar panels, a Solar Edge inverter, and several optimizers. An inverter is the device that converts the direct current electricity produced by solar panels to the alternating current found on the power grid. Optimizers reduce the power loss of a system that experiences intermittent shading. This was largely anticipatory.

Nancy and Richard planted a young tree in place of the one they removed. It won’t be as large as the one they removed, but it will still shade a portion of their panels when it matures. Optimizers cannot be feasibly added to a system after it is designed and installed, so including them in this case was good planning for the future.

Costs are lower than ever

The system was connected to the grid in July 2017. The cost of installation, materials and labor, was $17,500, but, with the 30% federal tax credit, due to be reduced to 26% at the end of this current year, the cost was reduced to $12,285. Nancy and Richard’s out-of-pocket cost for power has been reduced to less than $300 per year. The original estimate was that the system would save $48,000 during its 25-year lifetime. So far, everything seems on track to do just that; system installation costs should be paid back by savings in 8 years. Except for minor maintenance expenses, power will be largely free for the couple. There is no reason, if you can afford it, you would not do this,” Nancy said during our interview.

Nancy and Richard worked with RepowerYolo to design and install their system. RepowerYolo manages the design and installation of a solar system up to the point it interconnects with the power company. They also arrange for and interface with the solar contractor. In this case, the contractor was West Coast Solar. So far, the system has performed as anticipated and the owners are very satisfied.

Doing what they can to have a positive impact

The positive environmental impact is significant. To date, Nancy and Richard’s system has saved 18,370 lbs. of CO2 from going into the environment that otherwise would have been created by power generation. Nancy is particularly happy with this aspect of their investment. “We think the payback period is very reasonable and like the fact that we will actually save money after eight years. We should be thinking about not leaving too much of a mess for those who come after us, doing what we can to reduce our carbon footprint.”

Blog post: “Shade Issues No Problem for This Solar System”