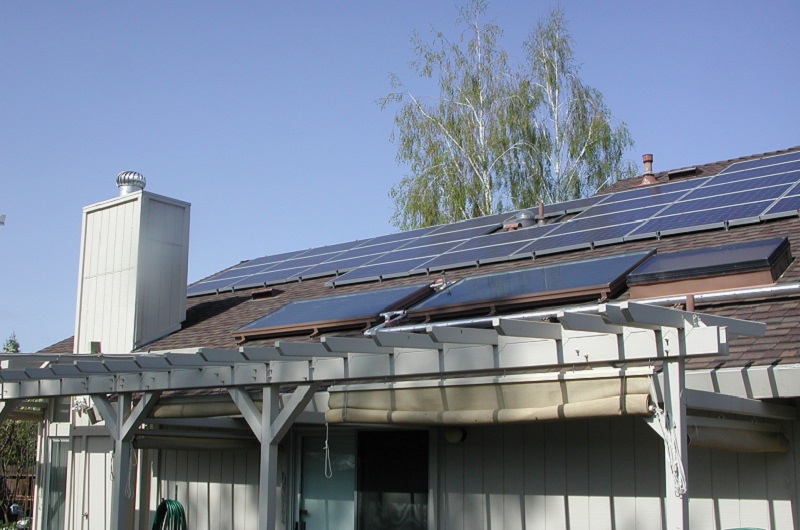 Wordsworth may have appreciated shade on a summer day, but solar panels do not.

Most people know that solar panels produce little on a cloudy day. But you may not have heard that even spotty or partial shade can negatively affect solar panel production a surprising amount.

If large trees cast full shade on your house most of the day, solar may not be in the cards. But for the much more common issue of intermittent or partial shade caused by branches, chimneys, or other small obstructions, the future is still bright.

Ultimately, the choice depends on a number of factors, and a clear conversation with your solar contractor is essential.

Two devices on the market can reduce the impact of partial shade: optimizers and microinverters. There is no way to make up the power lost to shading on a panel. But both devices can modify the characteristics of the power as it leaves a shaded panel so that it does not reduce the output of panels down the line. Both can be either added to or built in to individual solar panels at the time of installation.

Every residential solar installation is unique. Roof size, angle, and orientation to the sun all affect production. But for installations where intermittent shading is an issue, the addition of optimizers or microinverters typically increases production from 15 to as much as 25%. Over the lifetime of a system, 20 to 30 years typically, that is a tremendous amount of power that you will not need to pay for.

Each of these devices has advantages and disadvantages. The primary selling point of microinverters is that they may be slightly more efficient than optimizers, although there is little data to support this claim. Microinverter manufacturers insist that their product is inherently safer because they eliminate high voltage DC wiring on the roof. They also point out that if one or more microinverters fail, the rest of the system continues to function normally. Without this technology, inverter failure shuts down the whole system.

On the other hand, optimizers are cheaper and simpler than microinverters. A roof is dusty and hot much of the year: not a very hospitable environment for complicated electrical devices. With optimizers, the most complicated and vulnerable part of the system, the inverter, is located where it is less vulnerable and easier to access for servicing.

Solar panels produce direct current (DC) power. Typically, that power flows to an inverter that changes it into the alternating current (AC) electricity that runs the lights and appliances in your home. Microinverters also convert the power produced to AC rendering a centralized inverter unnecessary. Optimizers, on the other hand, modify the power coming from a shaded panel but leave it as DC current, to be converted later.

Half of the individual cells of a typical 60 cell solar panel are wired together in series and those two series are then wired together in parallel. For us non-geeks, this means that a shadow falling on just ten cells of a solar panel, or even fewer, can reduce the electricity production of the entire panel by 50% or more. It could be the shade from a tree, chimney, vent pipe or any of a hundred other things.

To compound the problem, multiple solar panels are wired together in a series. As a result, reducing the production of a single panel by half can reduce the production of an entire string of panels by half. This is not an issue that can be easily ignored.

A related problem is caused by sets of panels facing in different directions. Because they receive the sun from different angles or some panels may be in the shade, one set will always be producing less efficiently. Modern solar equipment can often accommodate two or more separate sets of panels, and not reduce the power produced by the higher producing string to the level of the lower. But in some instances, it is necessary to combine the power of both sets in order to reach the minimum voltage the system needs to operate. In that case, reducing the production of all panels to the lowest common denominator becomes a problem.

Advantages and costs of optimizers and microinverters

The addition of optimizers to a typical 5-kilowatt (kW) system adds about $1,000 to the price. Adding microinverters adds about $1,500 to a system of the same size. The payback period will vary based on the size of the system, your power usage, and the overall impact of shading but it should be relatively short, in some cases, less than a year.

Finally, optimizers and microinverters also allow the user to monitor the performance of individual panels not just the entire system. A manufacturing defect or more significant shading than expected on a particular panel can be more easily identified and possibly corrected.

It is not economically practical to add optimizers or microinverters to a system after it has been installed. You should discuss these system features with your contractor up front as part of system design.

Not all solar contractors are familiar with optimizers and microinverters. If shading could be an issue, homeowners should ask each contractor about their experience and familiarity with a range of design solutions.

Other elements of a system can cause a 3 to 4% reduction in overall system efficiency including wire size, quality of the connectors, and the like. That is certainly enough to have a significant impact on the bottom line over time. Other factors, such as panel orientation, can be just as important. Owners should be confident that the contractor they hire will install an economical system that will produce as promised.

Check out the Cool Davis Rooftop Solar web page to check in our progress as a City on solar goals and learn about rebates and tax credits. As of December 31, 2017, we were 68% towards our goals of 4,500 residential solar systems by 2020.

The author thanks John Walter of RepowerYolo for providing information for this article.