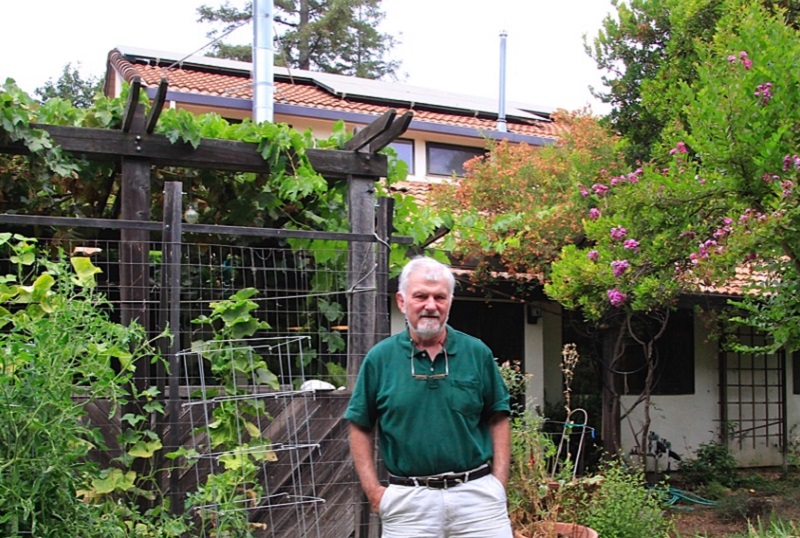 Chris and Christy Dewees have owned their house in Village Homes since it was originally built in 1977. The house came equipped with energy efficient features such as passive solar cooling, extra insulation, dual-paned windows, and solar water heating panels. As the home aged, its solar water panels began to show signs of wear and tear. Rather than letting their panels enter a state of disrepair, the couple decided to replace and add to their solar system.

Both Chris and Christy had previous careers in the natural sciences which influenced their decision to upgrade their system. Walking through their house and admiring the  prints of fish that dot the walls, it’s easy to tell what Chris’s previous career was. “I was always just into fish,” Chris told me as we sat at his dining room table, “and I went to school, got my Master’s in fisheries at Humboldt State and my PhD here, and worked here for 35 years on the faculty.” When looking at the vegetable plots in the couple’s backyard you can see where Christy’s specialty lies. “She’s a plant nerd,” Chris said with a smile. “Her major was botanical illustration, so it was a combination of art and botany.”

With interests so closely tied to the environment, it’s not surprising to learn that their motivation to upgrade and maintain their system originated from an intimate knowledge of environmental changes. “I was well aware of global warming,” Chris said, “well aware of the problems with high-energy use. So, it was kind of just our core values more than the economics of it that motivated us to add more energy-saving features.”

The solar water heating panels that originally were on the Dewees’s roof were different from the panels available to consumers today. When describing their old system, Chris recalled:“I think they were two sliding glass doors. Underneath were two sheets of plywood near the bottom of the south-facing roof with copper tubing coiled in a continuous loop attached to the plywood. The plywood and tubing were painted black. The copper tubing went up to an 80-gallon storage tank in the attic. One end of the tubing went from the top of the panels to the storage tank, and the other end of the tubing went from the bottom of the storage tank to the solar panels.  This created a passive thermal siphon as sun-heated water rises.

This particular system was susceptible to freezing. Despite having frost protection valves to turn off the water flow during cold winter nights, the system’s pipes needed to be replaced twice due to frost.

By 2009 the couple decided they’d had enough with frost damage and purchased a new solar water heating system. Instead of using water as the heating fluid circulating through the panels their new system uses a type of antifreeze known as glycol. Chris was and is still satisfied with this system saying, “With [glycol] we don’t have a freezing problem. It’s the same as antifreeze in your car so it doesn’t freeze. It’s a very efficient heater.”

A year before installing this new water heating system, Chris and Christy transitioned to a photovoltaic electric solar system. They installed 18 photovoltaic panels on the upper tier of their two-storied home. These panels produce about 2/3 of the electricity that they consume. Now that the couple produces a large portion of their own energy, their electrical bill plummeted. Chris estimated, “I’d say our electric bill for a year is about $300, whereas before it was probably $900 or $1000.”

While upgrading their system cost the couple a pretty penny, the cost would have been significantly more if they hadn’t gotten state and federal rebates. Most of the information Chris and Christy found on rebates was through online searches and by word of mouth. Chris noted that “[rebates were] pretty well publicized. The people selling them make you well aware of them as a selling point. The state and federal government did a very good job of publicizing stuff and the federal government you’d hear about it in the paper.”

When discussing the rebates he received, Chris noted that “Originally back in in 1977 we got a rebate for 30% of the solar panels cost. And then the same thing happened when we put in the new solar water-heating and photovoltaic systems” With these rebates, the cost of their solar photovoltaic system went from $27,000 to $21,000. “It does make a difference,” Chris said. “I mean it was a significant amount of money.”

Like Chris and Christy, many homeowners are motivated to lease or buy a solar system based on their environmental values. Rebates and long-term energy cost savings provide additional incentive. If you’re interested in learning more about solar options, follow Chris and Christy’s lead and do your homework to see if solar power is right for you.

Emily Estrada is from Livermore, CA. She moved to Davis with her 12-year-old cat, Calvin, to pursue a degree in Cultural Anthropology. As a Cool Davis intern last summer, Emily worked diligently on home heating and cooling, assisting with focus groups and producing homeowner success stories for our blog and web page. After graduation, Emily planned on taking her knowledge of anthropology and applying it in a corporate setting.