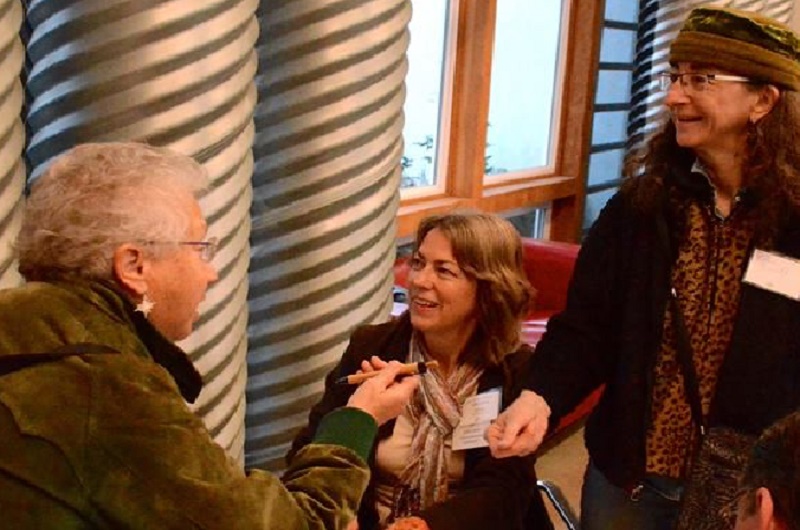 The next quarterly full Coalition meeting is set for February 21, 2018, at the Davis Senior Center (TBA) at 4:30pm. The next Coalition Steering Committee meeting will be held January 17, 2018, at RepowerYolo at noon.

Eighteen plus turned up to share successes as well as plans for the future at the Cool Davis Coalition meeting this past December 20, 2017, at the RepowerYolo office 909 5th Street (Indigo Architects), now the first fully net zero energy structure in Davis (energy, not just electricity).

Cool Davis Executive Director Chris Granger welcomed the group and announced the return of Chris Soderquist to the Cool Davis Board of Directors. While Chris S does not have his own Board profile yet, Cool Davis Board members are well represented on the Cool Davis website, including three others present at the meeting: Michael McCormick, Bill Heinicke, and Kerry Daane Loux. Chris S effectively made the case for supporting Cool Davis to help our community make the changes needed for a sustainable future.

Partner representatives, many of whom wear multiple hats both professionally and personally in our community, reported an impressive range of activities including a notable highlight:

Judy Corbett, the force behind the Davis Futures Forum, reported four speakers in the past year and two more on tap so far for 2018. Speakers like Joe Minicozzi, Dan Parolek, and Jeff Tumlin are playing roles with the City and its newly formed advisory group for the Core Area Planning process that is moving ahead as a first step in revising the City of Davis General Plan. Cool Davis Executive Director Chris Granger also serves with the Core Area group.

Diane Swann had the great news that Bike Davis has been granted party status by the California PUC for an upcoming change to the Davis-Sacramento frontage road. Diane reports that Bike Davis is seeking a separated bike path to encourage ridership and ease the challenges of getting across the causeway.

Jenny Tan, newly minted Public Information Officer for the Yolo Solano Air Quality Management District expressed both professional gratitude and excitement about buying a house here in Davis, biking for fun with her family and her New Year’s goal: “to bike to work or at least not drive.”

Kerry Daane Loux reported that the City is looking to retrofit the windows with inserts at City Hall, which will likely vastly improve comfort and energy efficiency there. Elizabeth Lasensky reported that Rancho Yolo finally got composting pick up from the City, is working with the City on transit training for residents who are nearing the point of giving up their cars, and that Yolo MoveOn was very active in state legislation and met with Congressman Garamendi on issues like climate change and fracking.

Lynne Nittler reported on the myriad activities of the Yolo Interfaith Alliance for Climate Justice including an award from the City of Davis, an upcoming Think Resilience Group Discussion Course starting January 16th, and the yearly Climate Conference, with a date just recently set for March 10, 2018. Episcopal Church of St Martin representative Jim Schaal was also in attendance.

Finally, Davis Manor representative Robin Kozloff reports the neighborhood has been busy working on improving shared street space as part of a neighborhood General Plan process. After completing a community mural in 2016, Davis Manor is now working towards better use of streets, sidewalks, and planters to capture rainwater and promote a positive community environment.

Coalition member representatives Ann Privateer, Alan Pryor, Richard and Anya McCann, and Lisa Baker were also in attendance. Check out Cool Davis on social media at @cooldaviscity for a collection of photos from the event.

Before a short Holiday Mixer, Cool Davis Communications Coordinator Leslie Crenna unveiled the new Cool Davis website and some of the online perks for partners.

Cool Davis is super proud to be working with this amazing group of partners and celebrating their achievements together. These stories and efforts are a true microcosm of the “crazy quilt of change” needed to bring our town into the new year and a new sustainable future.