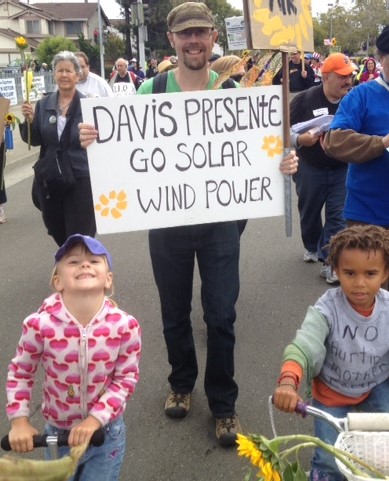 Community Inspired to Break with Fear

One hundred and seven earnest listeners crowded into the Davis Community Church Fireside Room on November 29 to a hear a talk titled, Breaking with Fear: Building justice, solidarity, and compassion in a climate of insecurity.

Davis scholar-activist Nick Buxton discussed his book, The Secure and the Dispossessed: How the Military and Corporations Are Shaping a Climate-Changed World, and people hung on every word.

Nick described the way the military paints a future picture of a world of scarcity lacking enough water and food, with desperate climate refugees driven from their homes by flood or drought causing waves of unrest.  The military response?  To protect the wealthy and the corporations against the masses, with force if necessary. Climate victims who have done the least to cause climate change are now turned into “threats.”

Nick’s research also uncovered something heart-warming; communities worldwide are developing just and peaceful responses to economic and ecological crises. Real incidents of climate tragedy actually bring out the best in people as they quickly reach out in compassion to help those in need. He gave examples from Hurricane Sandy and the fisherfolks from the island of Lesbos who actively search for a rescue boat immigrants pouring into Europe.

To read more about Nick Buxton’s work, including a thoughtful interview, go here.

Building a movement of solidarity and action

Nick challenged the room full of concerned residents with the question, “How can we build a movement of solidarity and action together?”

For the remainder of the evening, Pastor Chris Neufeld-Erdman of Davis Community Church posed questions for small group discussions and the room buzzed.

Discussions explored the power we have to change ourselves, beginning with advice to “Take personal responsibility for climate change and don’t ever give up” and to “Disentangle our complicity.”

Many groups emphasized the idea of waking up and taking action. They suggested we elect more women, show up at rallies, marches, and protests, do grassroots organizing, and become spokespersons.

Groups listed ways to improve our understanding of one another, including the idea of adopting a sister city in a red state and just simple listening. Some groups discussed ways to strengthen our own community with an emphasis on volunteerism, welcoming climate refugees, knowing our neighbors, and more.

A few groups developed ideas for city and state support.

The next opportunity for the community to come together will be Sunday, December 4, from 3-5pm, when a post-election community gathering will be held at the Davis Senior Center.  Mayor Robb Davis, Yolo County Supervisor Don Saylor, and City Council member Lucas Frerichs will be joined by local community and faith organizations to focusing on how we can best support four groups targeted by recent events.

A second gathering is planned for January with a focus on climate change and environmental issues. Watch for the date and consider helping to plan the agenda for the gathering.

Nick requested the Tuesday night group make donations to two causes. Collectively, $148 was donated to Yolo Interfaith Immigration Network, a local group serving and advocating for Yolo immigrants, and $222 for to Oceti Sakowin Camp in North Dakota to assist with the ongoing efforts of the Standing Rock Sioux and many other tribes to prevent the Dakota Access Pipeline from passing under the Missouri River near their reservation.