Home > Inspiration > The True Cost of Oil: Images of Beauty and Devastation 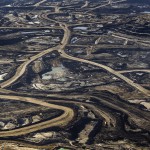 The True Cost of Oil: Images of Beauty and Devastation

“Canada’s Tar Sands are perhaps the most visually compelling example of all that is wrong with our addiction to fossil fuels and why we must change or face dire consequences for all life on Earth,” says Garth Lenz in his slideshow talk, The True Cost of Oil.  He highlights the plight of the Canadian boreal region and the threat of the Alberta Tar Sands mining to the surrounding area and to climate stability.

Garth Lenz will present his images of what happens when a pristine landscape is confronted by a vast industrial project on Monday, January 14 at 7:00 p.m. at the United Methodist Church at 1620 Anderson Road.  The suggested donation to Cool Davis is $20 at the door; student are free.  Space is limited, so please pre-register at   www.cooldavislenz.eventbrite.com

Garth Lenz is an internationally-recognized, environmental photo-journalist and member of the International League of Conservation Photographers.  He is best known for his photographic work presenting environmental and social justice issues throughout Canada, Chile, Ecuador, Borneo, and China.

A resident of British Colombia, he has travelled and photographed extensively throughout Canada’s temperate rainforest and boreal forest, gathering images to show the public the devastating destruction of these forests.  His slideshow talk – The True Cost of Oil: Images of Beauty and Devastation –highlights the plight of the Canadian boreal region and the threat of the Alberta Tar Sands mining.

Slideshow programs in Davis and Sacramento

Hosted by Cool Davis, Mr. Lenz will share his photos of the Alberta Tar Sands mining project and the beautiful (and vital) ecosystems threatened by the industrial impact, with questions and answers to follow.

Oakland Community Presentation at the Humanist Hall (390 27th Street between Telegraph and Broadway) on Sunday, January 20 at 1:00 p.m.   Suggested donation $10-$20.

In the photographer’s own words

Mr. Lenz has devoted most of his photographic career to activism on behalf of the wilderness.   In his own words, “From the outset, a central theme of my work has been the contrasts between the industrialized and natural landscape. The primary focus of my early work was forests and the impacts of industrial logging. As my understanding of ecological issues has grown, so has the range of my photographic subjects. My recent work has been largely focused on the world of modern fossil fuel production and its associated impacts on the landscape — including mountaintop removal coal mining, shale gas production, and most recently the Alberta Tar Sands.”

My recent work has been largely focused on the world of modern fossil fuel production and its associated impacts on the landscape — including mountaintop removal coal mining, shale gas production, and most recently the Alberta Tar Sands.”

The threat of the Tar Sands Mining

“The True Cost of Oil” is a visual journey across the largest and most intact forest ecosystem into the heart of what is possibly the largest and most ecologically devastating industrial project the world has ever known. As the third largest and most carbon intensive oil reserves on the planet, and the single largest source of imported oil in the U.S., the Alberta Tar Sands are a global threat to climate stability and a sustainable, clean energy future.

Canada’s Prime Minister, Stephen Harper, has referred to the Tar Sands development as “an enterprise of epic proportions, akin to the building of the pyramids or China’s Great Wall, only bigger.”

The project is undeniably vast with 20 of the world’s largest toxic tailing ponds and more proposed.  Just seventy miles downstream lies the intact Peace Athabasca Delta, the world’s largest freshwater delta, and the convergence of all four of North America’s major migratory bird flyways. Water consumption by the Tar Sands, and leaching tailings ponds, threaten the ecological integrity of this significant wetland.

The destruction of the carbon-rich boreal forest and the resulting exploitation of the world’s third largest and most carbon-intensive oil reserves could trigger a global crisis. NASA climate scientist James Hansen stated that if the Tar Sands continue to be tapped, it is “essentially game over” for any hope of achieving a stable climate.

Climate change writer Bill KcKibben has referred to the Tar Sands as “the biggest carbon bomb on the planet.”

Join award-winning photographer Garth Lenz for a visual exploration of this critical issue.

He was one of the lead photographers of the book CLEARCUT, The Tragedy of Industrial Forestry, and a sequel dealing with Chile’s forests.

His environmental work has led to publication in numerous books, newspapers, and magazines. These include The Nature Conservancy Magazine, Canadian Geographic, The Manchester Guardian, The New York Times Sunday Edition, International Wildlife, B.B.C. Wildlife Magazine, The Tokyo Times, The Christian Science Monitor, The Globe and  Mail, and Time Magazine.

The Sierra Club helped fund his travelling art gallery show of “The True Cost of Oil:  Images of Beauty and Devastation.”

Please visit the calendar at www.cooldavis.org for updates on the slideshow presentations in January or  contact info@cooldavis.org .