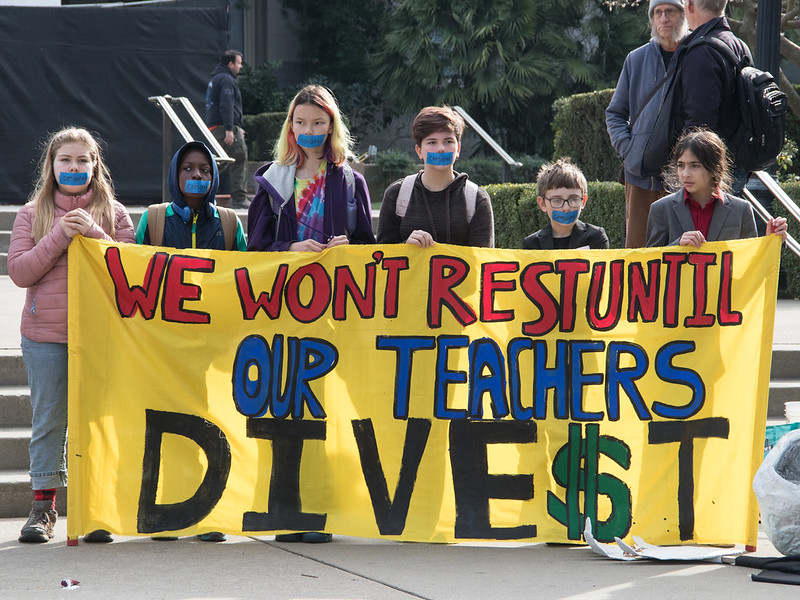 The Fossil Fuel Divestment Bill SB1173 introduced in the California Senate by Senator Lena Gonzalez of Long Beach made its way through three committees successfully. If passed, it would have required the two state pension funds, the California State Teachers Retirement Service (CalSTRS) and the California State Public Employees Retirement Service (CalPERS) to divest from fossil fuel holdings by July, 2030. Already some 1,500 institutions around the globe representing $40 trillion in assets have committed to fossil fuel divestment. CalSTRS and CalPERS would add another $9 billion to the divestment total, and help CA live up to its reputation as a climate champion. Unfortunately, the story of SB1173 did not end the way activists hoped for.

After eight years of diligent but ultimately utterly unsuccessful efforts trying to convince the CalSTRS and CalPERS Boards to divest the funds from oil and gas, Fossil Free CA members decided to try a fresh approach. Clearly the climate was growing worse fast, yet the passionate barrage of reasoning, pleading, offering scientific proof, holding rallies, and even a die-in elicited no response.

So, Fossil Free CA decided to author a divestment bill to protect the pensions of California teachers, fire fighters, and state workers from having their pension funds used to finance oil, gas, and coal extraction.

After checking in with the organization Climate-Safe Pensions (whose website asserts that fossil fuel investments are losing our public employees’ money, supporting deadly pollution in our communities, and threatening our climate) and Stand.earth (an organization that advises and supports pension divestments), Fossil Free CA gathered a coalition of partners to support a bill. Meanwhile, experienced members of the California Federation of Teachers composed the bill text. A small committee approached Senator Lena Gonzalez to ask her to sponsor the bill. Given her district of Long Beach which is heavily polluted from both heavy freeway traffic and cargo ships coming and going, she readily accepted. The bill announcement with Senator Gonzalez and Fossil Free CA program coordinator Miriam Eide successfully launched the campaign.

Soon organizations from all over CA signed on to join the coalition and support the bill, including the Cool Davis Board of Directors.

Individuals in the growing climate justice coalition prepared to write letters, send tweets, and make phone calls in support of SB1173 as it reached each of three committees in the CA Senate. Groups of carefully prepared, enthusiastic bill-supporters met with each member of each committee by Zoom to answer any questions and discuss why their aye vote was so critical.

Bill passes the senate; killed in the assembly by fossil-fuel-funded member

The bill passed in all three Senate committees! The bill progressed to the CA Assembly where it came to Jim Cooper’s Committee on Public Employment and Retirement. He refused to meet with anyone from Fossil Free CA regarding the bill, though his committee members welcomed the opportunity. On June 21, 2022, he chose to not allow a hearing for SB1173 and thus killed the bill to divest the pensions from gas and oil holdings for this session.

The Sierra Club publishes a list of oil and gas campaign contributions to legislators, called the Tracking the Dirty Dollars report, which shows Cooper accepted over $80,000 in contributions from fossil fuel companies during the 2019/2020 timeframe, including contributions from Sempra Energy, Southern California Edison, Macpherson Oil Company, Phillips66, Valero Services, Inc., Marathon Petroleum Corporation, and Signal Hill Petroleum. Assembly member Cooper represents district 09 which encompasses Elk Grove, Galt, and Lodi. The most recent Tracking the Dirty Dollars report from May 2022 shows two contributions of $4,900 each to State Assembly District 09 from Chevron Corporation and Sempra Energy (dated 4/14/2021 and 5/1/2021 respectively). Fossil Free CA wrote in their response to these events, “This one-man veto allows the state’s pensions to continue to invest billions from public funds into the fossil fuel industry, for now. This decision is a moral failure that disproportionately impacts young people, indigenous communities, communities of color, and low-income communities. Climate chaos has already cost California billions in damages and health costs from fossil fuel pollution and climate disasters.”

Fortunately, Assembly Member Cooper has been elected Sheriff of Sacramento and will depart from the legislature after this session ends.

Undeterred, Senator Gonzalez has already announced she will reintroduce the bill the next term, and the coalition of 143 unions, cities, and supporting organizations will be ready to push again to get this divestment completed (see a link to Senator Gonzalez’s fact sheet below with the full list including Cool Davis). Just since February, folks made thousands of calls, wrote nearly 20,000 letters, and organized dozens of meetings with legislators to advocate for SB1173! It took New York City and State years to win divestment, and Harvard also took years of effort to achieve their divestment.

The divestment of CalPERS and CalSTRS will be the largest divestment the world has seen. Given how far the bill advanced on this first effort, and given the strong support that remains, it may well succeed next year!

Visit http://www.fossilfreeca.org to explore the organization and join if you wish or reach out to Lynne Nittler (lnittlerATsbcglobal.net.  Fossil Free CA members are scattered all over the state, with a sizable number of youth groups (mostly high school). Donations help support the work as there are several paid employees. Most members are volunteers, and many are CalSTRS and CalPERS retirees.

Senator Lena Gonzalez (D-Long Beach): “While I am deeply disappointed that my Senate Bill 1173 was not set for a hearing in the Assembly Committee on Public Employment and Retirement this week, I remain committed to the necessary and ongoing fight against the impacts of climate change on our state, and especially those communities in my district that are disproportionately impacted by the negative effects of the climate crisis. … Teachers and state employees whose retirement futures are invested by our state’s pension funds have long demanded that CalPERS and CalSTRS cease investing their money in fossil fuel companies, and this demand will only grow stronger and louder. I’m thankful for the hard work of our grassroots supporters at Fossil Free California, the California Faculty Association, and the youth climate activists with Youth Vs Apocalypse who helped move this bill out of the Senate and look forward to continuing this fight to ensure policy aligns with our state’s values as a world climate leader, and that we can pass on a livable planet to future generations.”

CJ Koepp, Communications Coordinator at Fossil Free California: “It’s not surprising that our biggest obstacle to reducing the political influence of the fossil fuel industry in California and beyond is exactly that—the chokehold that Big Oil has on our political systems and our representatives. … While the bill’s progress has been cut short this session, our youth-led coalition has already accomplished so much and we’ll be back next year stronger than ever

Bill McKibben, Founder, Third Act: “California’s progress on climate action is undermined by its huge public investments in fossil fuels—trying to make a profit off the end of the earth is a mug’s game, not to mention immoral. While legislators such as Assembly Retirement Committee Chair Jim Cooper succumb to the fossil fuel industry propaganda, we will continue to organize. We will fight until California joins the thousands of jurisdictions around the world that have done the economically and environmentally sane thing and divested.”

Miriam Eide, Coordinating Director, Fossil Free California: “It is upsetting to see one man backed by fossil fuel interests halt a powerful coalition of voices calling for climate accountability and the divestment of our state pensions from fossil fuels. SB 1173—the Fossil Fuel Divestment Act of 2022—may have died, but we will be back next year stronger than ever. … Already we are pivoting to continue building power with our union and community allies and to keep the pressure on the state pensions through future legislation and direct pressure on the pension boards.”

Amy Gray, Senior Climate Finance Strategist at Stand.earth: “At a time when frontline communities cannot afford anymore lip service, it’s devastating that fossil fuel and corporate interest blocked this crucial legislation through committee. We cannot allow fossil fuel financing and legislators’ delay tactics to wreak any more havoc on our climate. … Frontline communities won’t wait for lawmakers to appease the fossil fuel executives while our homes burn and flood, while our bodies are polluted and our children’s futures are destroyed for profit. This isn’t the end of this fight.”

We’re proud to present our next Climate Movie Cirlce film, “Gather” on Sunday, November 20th from 1:30pm to 3:00pm, with an optional follow up discussion until 4:00pm, at the Blanchard Room at the Mary L Stephens Yolo County Library Branch Library, 315 E. 14th Street, Davis, CA. We hope you’ll stay for sharing and learning together! #DavisCa www.cooldavis.org/2022/11/02/november-climate-movie-circle-gather-for-indigenous-food-sovereignty/

"Gather" follows the stories of Native Americans on the frontlines of a growing movement to reconnect with spiritual and cultural identities that were devastated by genocide. MORE at gather.film/ ... See MoreSee Less

Greenhouse gases in the upper atmosphere currently at 419ppm. We passed the 300ppm mark about 1920. The last time above 300ppm was 800,000 million years ago. Human generated greenhouse gas emissions are the cause of rising temperatures and #climatechange