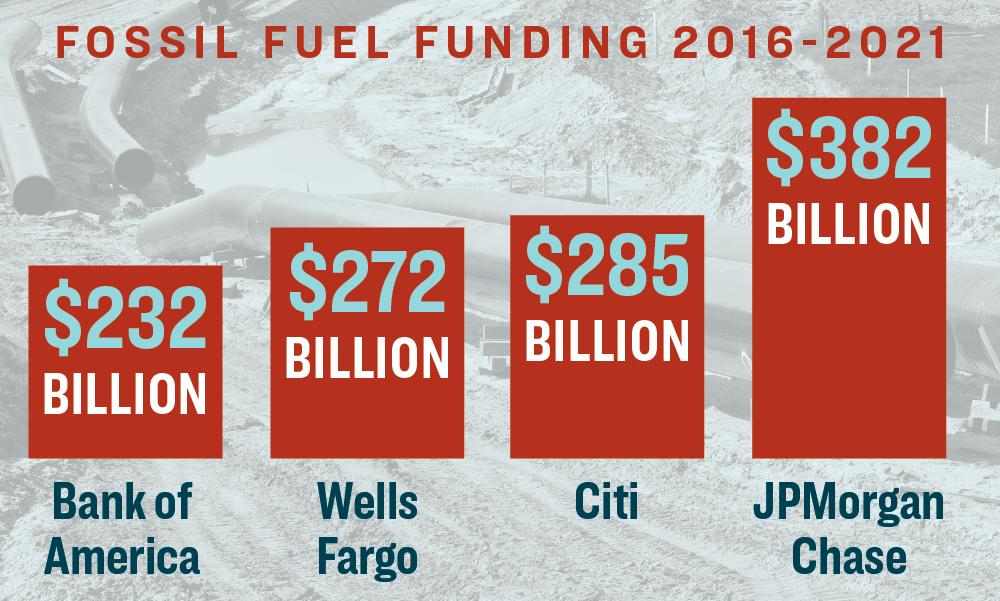 The truth about Chase:  JPMorgan Chase is the world’s largest funder of the fossil fuel industry! In the five years after the Paris Agreement was adopted in late 2015, JPMorgan Chase Bank provided nearly $316 billion to fossil fuel corporations that were building coal mines, oil pipelines, and fracked gas terminals ― that’s 36% more than any other bank in the world!

Chase also funds Russian gas and oil companies! Gazprom, one of the world’s largest oil and gas companies, is majority-owned by the Russian government. That means that Gazprom’s profits fund Putin’s war machine. Chase Bank is the largest funder of Gazprom as well as other Russian oil companies!

In the five years leading up to the present, scores of organizations have been building a powerful, nationally-networked campaign to hold Chase and other financial institutions accountable for their complicity in the climate crisis. These organizations and efforts include Stop the Money Pipeline, Youth Climate Finance Alliance (Future Coalition), Indigenous Environmental Network, Customers for Climate Justice, Reclaim Finance, Third Act, the Sierra Club, and the Rainforest Action Network.

While Chase continues to fund deadlier heat waves, hotter fires, and higher floodwaters, their shareholders are demanding change. Chase has stepped back from some coal projects and some drilling in the arctic, demonstrating that public protest is beginning to work.

Let’s keep up the pressure. Protests such as this one are occuring across the country and the world!

What: Protest Funding for the Fossil Fuel Industry at Chase Bank in Downtown Davis

Bring: Water, a hat, and (optionally) a sign to show your commitment to a fossil free future (see sign ideas below)

Just show up or contact Lynne Nittler at lnittlerATsbcglobal.net to be part of this regular local protest and the larger movement!

If you love running campaigns, we have some opportunities!  Please let Lynne know if you want to help recruit more folks for the weekly protests.  You could be our official Recruitment Coordinator as we gradually widen our circle of clear-sighted, determined protestors. Is your thing Communications/Social Media Director!  Yeah!  That’s what can make our efforts fun, and keep our energy lively.  Let Lynne know if this is your thing.

If you decide to close your Chase Bank account, please wait! Bill McKibben is gathering folks to leave Chase Bank all at once to make a BIG impression. Your decision may start a landslide of others! Visit McKibben’s Third Act about the plan.

If you do decide to leave your bank, consider a local/regional credit union. The Davis area is blessed with several choices.

Back in September of 2017, the City of Davis, along with the University of California system, dumped Wells Fargo Bank for funding the Dakota Access pipeline and private prisons, and for predatory lending practices (Felicia Alverez, February 8, 2017 Davis Enterprise). See last year’s article titled Time for Yolo Public Bank article by Scott Steward for more ideas about how to change how banking is done.

If you can’t make the protest, call 212-270-1111. Tell JPMorgan Chase CEO Jamie Dimon to pull JPMorgan Chase’s funds out of fossil fuels now.  You can say: Hello, my name is ___.  I’m calling JPMorgan Chase Bank CEO Jamie Dimon’s office today to urge him to stop giving loans to the fossil fuel industry.  I want him to do this for the sake of people around the world and the future of our planet.  As a consumer, I will refuse to bank with any company that is so out of touch that they’re still funding fossil fuels….Or make your own statement.

Chase invests in climate disasters at our expense!

The world is burning;  Chase throws fuel on the fire.

Break up with fossil fuels

There is No Plan B!

We All Deserve a Future