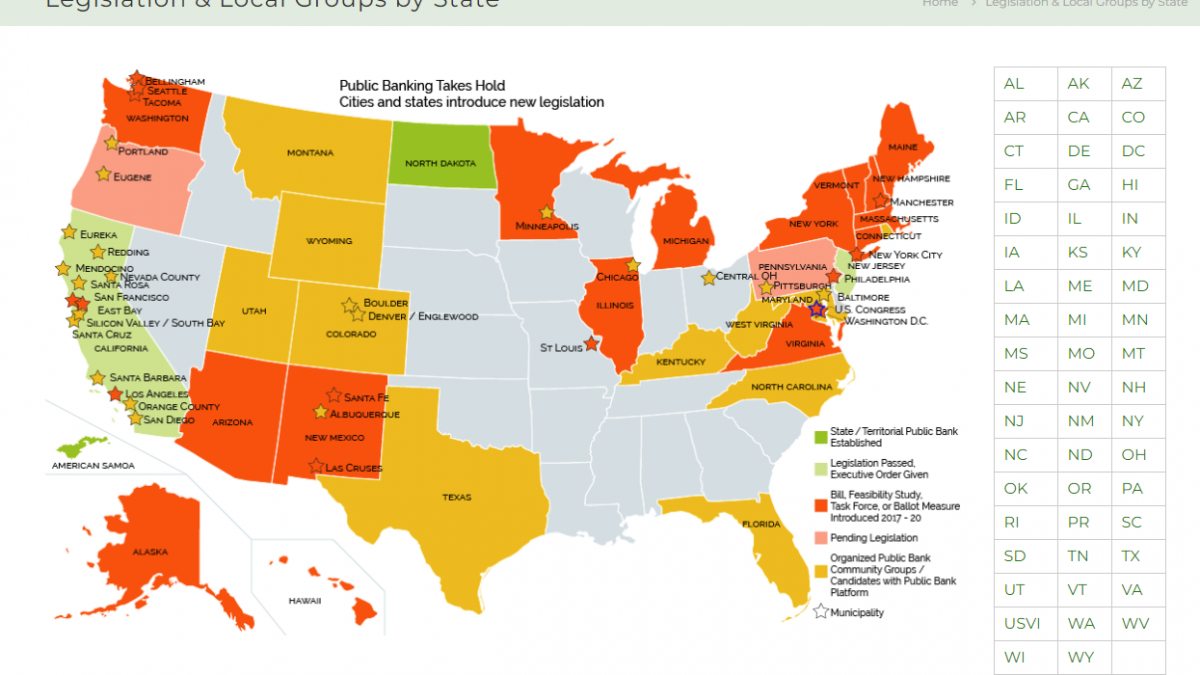 The City of Davis will spend $84 million over 10 years to fix its streets and bike paths, infrastructure which will continue to be necessary to our city long into the future. The banks and financial institutions that move money for state infrastructure investments collect $7.7 billion dollars a year for servicing $117 billion in bond debt alone. This is not to say that Davis street repair is going to be financed by bonds, but $84 million is a lot of money, and some large portion of that spending will be financed over those 10 years (carrying interest as the principle is paid back).

One way to finance these critical projects is to create a local public bank. Public banks can provide a host of benefits (the list below is taken from an introduction to public banking by Ellen Brown). Public banks:

The connection to an environmentally just future

There is a strong connection between an environmentally just future and the formation of public banks. Following California’s passage of AB 857 in October of 2019, testimony before the California Governance and Finance Committee surmised public banking benefits as providing “investment opportunities for those doing social good: to build affordable housing; to build sustainable infrastructure; to support small business survival; to put people back to work while rebuilding our communities, especially those that are ignored by big banks.”

Public Bank advocacy is well organized and the California Public Banking Alliance (CPBA) has set out to create socially and environmentally responsible city and regional public banks. California and 12 other states passed laws or are on track to create public banking systems. Trinity Tran, co-leader of Public Bank LA, one of the principle organizers behind the passage of AB 857, was a featured speaker at the recent Central Coast People for Public Banking workshop, where county, municipal, and public interest group representatives met to discuss the steps required to form a public bank. The main message from that workshop was that public bank efforts are often multi-county, multi-city, and multi-advocacy, requiring the assembly of enough asset commitments and enough political will to pay for a viability/business plan that will stand up to State oversight review.

Scroll down for links to all sources and resources used in this article.

We were stung in the 2008-9 banking bailout. How long have commercial banks been invested in specious extractive industries, using our dollars to fund private prisons and disastrous oil projects? Appeals to board directors were disregarded and finally cities and university systems had had enough. Back in September of 2017, the City of Davis, along with the University of California system, divested from Wells Fargo Bank for funding the Dakota Access pipeline and private prisons, and for predatory lending practices (Felicia Alverez, February 8, 2017 Davis Enterprise). Truthout’s July 2019 eye-catching article does a good job of explaining the reasons behind a confidence drop in commercial banks nationally.

A public bank does not change how we are taxed or when or why money, collected by the State, makes its way back to cities and counties, but, as recently reported by Anne Ternus-Bellamy in the Davis Enterprise, Vice Mayor Lucas Frerichs, Councilman Dan Carson, and Assemblywoman Cecilia Aguiar-Curry are seeking more ways to bring flexibility and dollars to public projects. Their project list is most suitable for public bank financing: bike/pedestrian crossings, municipal broadband, public safety reform, renewable energy projects, affordable housing, and COVID relief. Parking those dollars in a public bank would further leverage the scope and breath of public project benefits – allowing for local control and potentially more expansive projects.

Public banks are an overall win. They are not designed to replace your local bank and to this point I think the first section of California’s Public Bank law speaks for itself: “It is the intent of the Legislature that public banks shall partner with local financial institutions, such as credit unions and local community banks, and shall not compete with local financial institutions.” It is the national/international commercial banks that will be inconvenienced. Where public banks form, commercial banks will no longer be able to extract your tax dollars for who-knows-what form of inscrutable misaligned adventure.

Paul Pryde, a five decade DC banking policy veteran, was a key speaker at the recent “Friends of Public Banking Santa Rosa,” a talk which featured the Public Bank East Bay, one of the “big three” that includes Los Angeles and San Francisco. Public Bank East Bay is closest to releasing its charter for state review. “The larger the bank the better it is able to achieve sustainability … $300 million in capital is a good place to aim for a regional public bank,” said Pryde. “We are trying to get a federal guarantee – so you could have as little as 4% to 10% capital to support $3 billion to $6 billion in loans.”

Public Bank East Bay’s Susan Harmon was central to advocacy for public banking long before the California Alliance was able to overwhelm the legislature with hundreds of labor, environmental, and consumer groups assembled in 2019. “She’s very smart on the details,” says Nancy Price, also a long-time advocate of democratizing our monetary system, who lives in Davis. Nancy and Susan worked together previously through the Women’s International League of Peace and Freedom, so it was natural for Nancy to help bring about the AB857 win.

The path to public banking is solidifying and further legislation, such as AB310 — to convert the State’s infrastructure rotating fund to a depository bank and amendments to provide funds to pay for public bank viability studies — is set to improve public bank success. “It’s wonderful that it’s lifting off” Nancy reflected. “It’s time to bring public banking to our region’s elected officials and have a larger conversation.”

For a long time, the big misconception of private banking has been that it’s the only game in town. That has never been true. Some of us have already found our local banks and credit unions, whose ratio of deposits to local re-investment are higher than that of commercial banks. Right now, the best way you can support the prospect of a public bank is by opening up an account at your local credit union or bank. It was our local River City Bank that stepped up to make start-up loans available to Valley Clean Energy Alliance and several other Community Choice Aggregation/Energy providers around the state.

A regional public bank to meet the challenges of climate change

A public bank is part of the system adjustment we require to meet the challenges of climate change. Davis, West Sacramento, Winters, and Woodland, along with Yolo County government, will make deposits up to $1.03 billion (estimated) in 2020 -2021. A public bank could make it possible for a lot more people to participate in our economic system and make the investments needed for significant changes, for instance, technologies that generate solar energy in tandem with paving streets.

AB 857 allows for 10 public bank charters. Our community has the leverage – will we use it? Now is the time to make a public bank. Persons/groups looking to support the progress of regional Yolo participation in a public bank can contact scott@stonesthrowstrat.com.

Pros to opening up an account in your local credit union or bank: https://www.forbes.com/sites/moneybuilder/2011/06/01/pros-and-cons-of-credit-unions-and-there-arent-many-cons/?sh=5cee84714bba