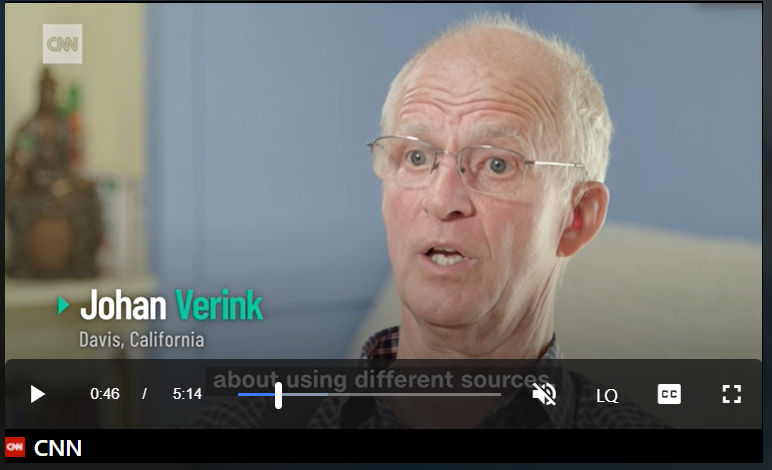 In his unrelenting quest to ask difficult questions and convey the urgency of this moment, Johan Verink, longtime Cool Davis volunteer photographer — who hopes to capture the photo that changes the course of climate change — called CNN recently and asked this simple question: “Since I can only change my own behavior, I need an indicator to be held accountable. How am I going to do that if I can’t see on every transaction my impact on climate change?”

The resulting CNN video story headline reads, “He rides his bike, has solar panels, and eats veggies. But this one decision makes his carbon footprint worse” and the subtext goes, “Johan Verink from Davis, California, wanted to know how he can reduce his carbon footprint so he called CNN to ask how his personal decisions are impacting the planet. See the surprising answer.” The story has been picked up by MSN, Yahoo (probably through contract of course), the Indiana Gazette, and several folks on LinkedIn, including Graham Hill, Founder and CEO of the Carbonauts, based in Los Angeles.

The surprising answer turned out to be his one flight to The Netherlands each year, which approximately doubled his transportation emissions. You might be tempted to think of the flight as cancelling out all the other good work he’s done, but if Johan wasn’t riding his bike, generating solar power, and eating low on the food chain, his emissions might be double what they are now, even with that flight. All these efforts reduce his total emissions significantly, even though there’s still one area to tackle.

Better to think of it as a challenge: How can Johan reduce the emissions associated with traveling to visit friends and relatives each year in a place one cannot reach reasonably without air travel?

Air travel woes and what we can do about it

It’s no secret that transportation is the source of our greatest quantity of greenhouse gas emissions in California and Davis, hovering somewhere around 70% in any given year. For some, air travel makes up a significant portion of their total transportation emissions. It only takes one air trip to double your emisisons if you’re already pretty good with your bike or drive a super efficient vehicle. Of course, everyone’s situation is different.

But how do you figure out how much air travel impacts your emissions?

CNN recruited another Davis resident and long-time climate change hero, Chris Jones, to help you answer this question. Chris was interviewed too, reporting on the totals for Johan’s carbon footprint using the Cool California calculator for individuals and households. CoolCalifornia.org also offers a caluclator for busineses. (In 2013, Davis won the Cool California challenge with teams of residents using the calculator to figure out their yearly emissions in tons of CO2 equivalent per year competing against other cities.) It was Chris, using the Cool California Calculator, who determined that the one flight to The Netherlands doubled Johan’s transportation impact for the year: “air flight is their biggie.”

Somewhat ironically, and to steal the limelight briefly, this writer was on vacation in Hawaii, having recovered from my guilt for the exact same thing that puts Johan’s emissions in the red when the CNN story hit the internet.

Why had I been feeling guilty? My United Airlines flights both there and back made two stops and did not trace a straight line. Most fuel is burned at takeoff, so the more takeoffs, the more fuel is burned. I wasn’t too happy with the scenario. To add to that, I had flown down to LAX before taking the last leg to Hilo and the Big Island, basically doubling back and covering the same ground ground twice. Due to the hub system and basic logistics, this is sometimes all that airlines have to offer.

But then I happened upon something that helped me alleviate at least some of my guilt: apparently, United Airlines purchases a biofuel-jetfuel mix (called sustainable aviation fuel or SAF) for all flights out of LAX airport that the company reports reduces lifecycle emissions by about 60%. United also recently flew 100 passengers between Chicago and Washington DC on 100% biofuel in one engine: “In 2021, United was the first airline in the world to operate a flight powered by 100% drop-in SAF. This particular SAF can provide an estimated 75% reduction in lifecycle CO2 emissions, bringing us one step closer to making 100% green — carbon-neutral-aviation — the norm.”

So at least the longest leg of my vacation flights, flying from LAX to Hawaii, produced a lot less emissions than I expected. But what about all those stops and the leg back that skipped LAX? Not ideal. In the future, I will always try to get the most direct flight I can, for so many reasons. Racking up miles, especially if you’re doubling back on distances, is NOT the great thing your mileage program might make you think. Maybe I’ll look into using one airline for one leg and a different one for the next to avoid stops or doubling back on distances. This is not the norm in the industry, but maybe it’s time it was.

Another approach is to inquire with the Sacramento Airport (SMF) and United Airlines to find out when biofuels will be used there. Another is to lobby my favorite airline to start using biofuels. A third, as always, is to reduce the air miles I travel, not increase them because it might get me even more credits towards even more miles. Folks who travel for business might start using teleconferencing more or consolidating trips, whatever it takes to make it work and reduce those miles. 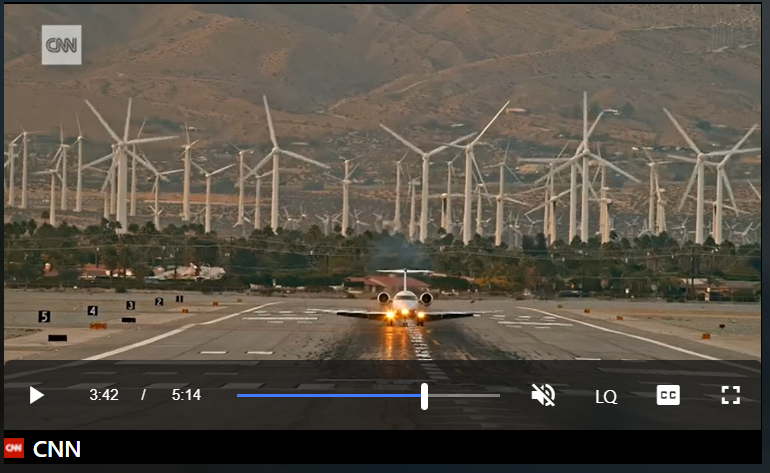 Back to Johan! He made a point during his CNN interview that could not be more important to the climate crisis we find ourselves in and it’s making lots of impressions:

But there’s more. The main tension in the video is between Johan’s point abut individual responsibility and the need for system change. This is a healthy tension because our answer at Cool Davis is “all of the above.” Cool Davis encourages and facilitates advocacy for system change,  including direct activism, while also pursuing our work to inspire residents to do all they can at the household level to cultivate personal sustainability.

We hope you enjoy Johan’s experience and take this moment to rededicate yourself to reducing your emissions and working on changing the system that makes sustainable choices difficult. 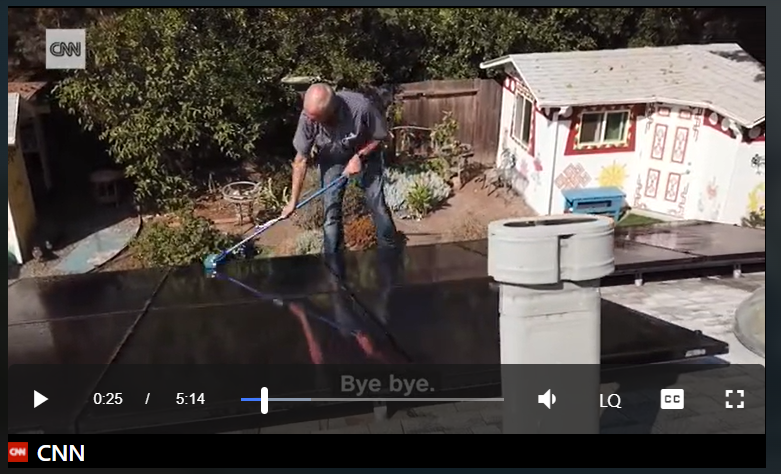