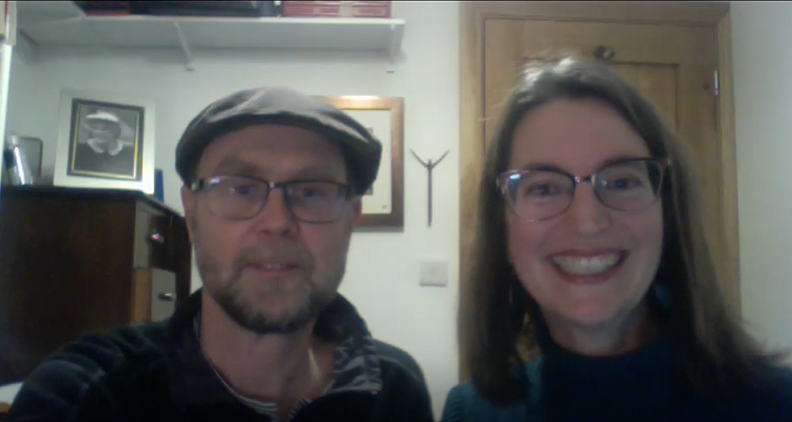 The panelist takeways were all related in the need for urgency to act now and to act local in the absence of successful international and national level leadership. At COP26, Juliette spent much of her time hearing and learning from indigenous leaders, some associated with the Indigenous Environmental Network. Nick’s presentation as part of the people’s summit and his research as part of his work with the Transnational Institute relate to the fact that the US spends more on border and immigration enforcement than climate.

The couple proposed a move to a Regenerative Economy citing the Our Power Campaign through Movement Generation (https://movementgeneration.org/) (see graphic below).

Dan affirmed that the US is lagging behind much of the world in decarbonizing tranportation but that California is taking more assertive steps forward soon (as informed by his role with the CA Air Resources Board). Despite policy breakdowns, he’s “more optimistic than ever about our transportation future.” Finally, he made an important point for everyone: “Change is driven by activism” (01:27:14 in the video!).

Megan told us her story of activism from her grandparents work to her own today. Her way to communicate urgency to others is to ask: What do you  love and hope to never lose to climate chaos? “I have stubborn optimism that fuels me forward. I choose an alternative view of power. WE must disrupt the status quo in these institutions; we have the power to topple the pyramid.” She is involved in many efforts including Fossil Free UC Davis. Community building is an important aspect of her work: building power and fulfilling human needs for connection are at the heart of the climate movement. She continues to support her grandparents vision.

Sections in the video

Juliette Beck and Nick Buxton were on site for COP 26 as a family. Juliette and Nick share a long term commitment to working for environmental justice in their work around the world with organizations such as Sierra Club and the Transnational Institute. Davis residents since 2010, Juliette and Nick continue to lead advocacy at local and international levels. Right now they reside in Wales, alongside Nick’s family, which allowed for their more in-person participation in COP26. They plan to return to Davis with their family in summer 2022.

Leslie’s notes from presentation (errors are my own, watch video for first hand): The official COP26 events occured in the Blue Zone; the Green Zone was for exhibitions, some were greenwash, some were  interesting. The People’s Summit occurred outside but in parallel; arrived day before biggest march with Greta, one of the biggest ever for climate justice in Britain; reps of Pacific Islander nations fighting for their right to exist; outpouring of humanity in street of Glasgow; folks from Extinction Rebellion; organization fighting for renovation of homes in the UK is called Insulate Britain; Feminist block sang for hours in the rain (we will not abandon our magnificent planet); climate justice block; Peace block. Migrants for rights empowerment argued for why climate justice has to include migrant justice. COP26 was meant to be about delivering the promise of Paris; they did not make that commitment, some pledges and targets, could be a lot more than 2.5 degree rise; “net zero” is not “real zero.” Strong condemnation at the end of the summit.

Juliette spent much of her time hearing from Earth Defender hero Tom Goldtooth, who founded the Indigenous Environmental Network @IENearth (https://www.ienearth.org/), championing rights of nature. 80% of biodiversity is in indigenous ancestral territories. Kamath River tribes have now secured the removal of one of the largest dams in history; Minnesota activists have been protesting Line 3, over 900 arrested; Ashley Fairbanks was phenomenally eloquent about protecting her native right to steward the land, part of the “land back” movement. We have a lot to learn from these struggles; Nemo Andy Quiquita Waorani Tribe Ecuador; California is the largest consumer of oil from Amazon Rainforest (Chevron, Valero); 1 in 9 gallons of fuel pumping in California is from the Amazon per Linked Fates report.

There’s a need to move from an extractive economy to a Regenerative Economy, based in eco restoration (see Our Power Campaign, Movement Generation Just Transition image below); every policy must get us moving in the right direction toward a regenerative economy; need a values filter. Local imperative of local solutions has made very apparent due to the failure of COP, we know the next few years are critical. We have declared a climate emergency, we have to reach real zero. The question we ask: how do we transition as quickly as possible off fossil fuels, how to be just and fair for everyone?

Our Humanity Is on the Line

COP26: Leadership Must Come from Below

Dan Sperling is Distinguished Blue Planet Prize Professor of Civil Engineering and Environmental Science and Policy, founding Director of the Institute of Transportation Studies, and founding chair of the Policy Institute for Energy, Environment, and Economy at the University of California, Davis. In Dan’s own words, despite the trauma around the world trauma around the world and policy breakdowns here in the United States, I’m more optimistic than ever about our transportation future. And I’m thrilled that our amazing team of faculty, reseachers, students, and staff is playing a central role. It’s exhilirating, demanding, challening, and rewarding.”

Notes from presentation: Emissions are 50% transportation in CA. US is lagging much of the world in decarbonizing tranportation.  #1 strategy is zero emissions vehicles, large reductions in reasonable time frame is all about vehicles, US is not doing much even with Build Back Better (the US admin putting up money to build charging infrastructure, electrification targets but no regulations, some incentives, nothing on regulations and pricing); Europe is racing way ahead of the US in terms of converting vehicles to zero emissions, China also. 34% all vehicles sold in Germany last month were PIH (plug-in hybrid) or all electric: CA is 11%, China is 20% market share. EVs almost commonplace in many parts of the world but not in US.

We do have CA regulations that require all buses to become zero emissions and airport shuttle buses by 2040. In 2029, all sales will be zero emitting, pretty exceptional. Car side in California is lagging, but we are about to adopt some very aggressive requirements, 10-12% to be electric or hydrogen right now. In 2026, the California Air Resources Board (CARB) will be adopting new regulations for likely 100% zero emitting vehicles by 2035; CA adopted rule last year that requires most truck sales (70%) to be zero emitting by 2035, all trucks zero emitting by 2040, steep trajectory; lots of challenges, need chargers, incentives; all off road equipment starting in two years from now phasing to zero emissions, including leaf blowers etc., which will still be noisy but quieter.

For Davis: no motorized vehicles at all; active transportation, bikes; discourage parking downtown, should have pricing of parking in downtown area.

Megan Phelps develops and leads San Diego 350.org’s Youth4Climate Program for youth climate leaders. In spring of 2021, she graduated with high honors as a Regent’s Scholar from UC Davis with a B.S. in Environmental Science and Management. At UC Davis, she founded and led a climate action club as a Climate Reality Project grad, and she continues to pressure the administration to end its reliance on fossil fuels for energy and advise new UC Davis student leaders. Megan also serves as a staff research associate at the Climate Psychology and Action Lab at UC San Diego, where she researches how to inspire collective action for climate justice.

Notes from presentation: Started as a youth attending peace rallies and protests of the Iraq War. Became obsessed with reducing plastic waste within her family. Started Environmental Club in high school, EcoWarriors elementary program; her grandparents were beginning to dedicate all their time to climate change. She felt empowered about her future, but disempowered about change. She founded Climate Reality Project at UCDavis, organizaing a 24-hour climate strike and a climate ribbon project.

Her way to communicate urgency to others : What do you  love and hope to never lose to climate chaos? “I have stubborn optimism that fuels me forward. I choose an alternative view of power WE must disrupt the status quo in these institutions; we have the power to topple the pyramid.”

Her current passions at local and state levels; supporting youth work, including youth strikes as part of a local day of climate action 2021 with local, state, and national demands, showing students that they have a voice and their futures matter; active with Youth v. Oil in CA, a group of high school students have written a resolution addressed to Gov. Newsom, which was supported by the San Diego school district and board of educ; they are working on city council; has inspired statewide coalition of youth activists passing similar resolutions to end oil extraction.

Community building is an important aspect of her work; building power, and fulfilling human needs for connection which are at the heart of the climate movement. She continues to support her grandparents vision.

At the UC level, she is involved in the Fossil Free UC Davis project. UC has agreed to be carbon neutral by purchasing offsets, which is inadequate, may have happened otherwise; not clear if offsets contain social justice issues, and offsets don’t address emissions. She helped write a petition, which has garnered 1,300 signatures; earlier today group met with Chancellor May to present the petition. If UC Davis does not respect the salience of climate science, I have little confidence that other institutions will. There have been Chase Bank protests at UCSD, with information on how to move your money to responsible institutions like credit unions; UCSD has agreed to change ATM on campus to a credit and remove Chase Bank.

What you can do: sign the petition. Write to President Biden to declare a national emergency on climate.

Graphics from the presentations below 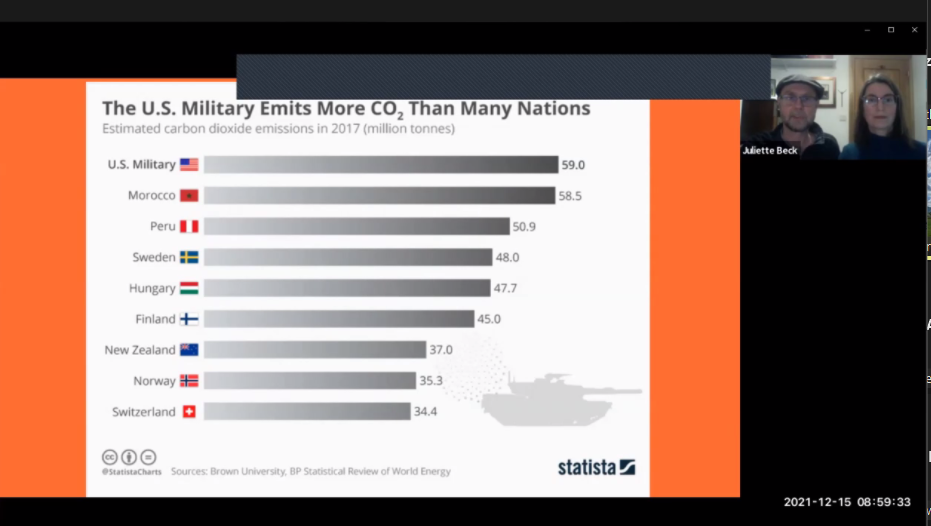 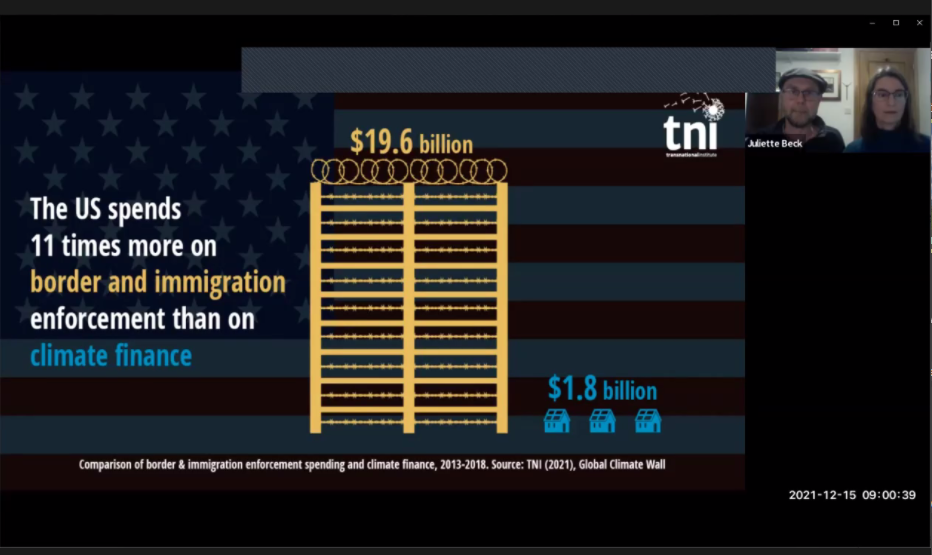 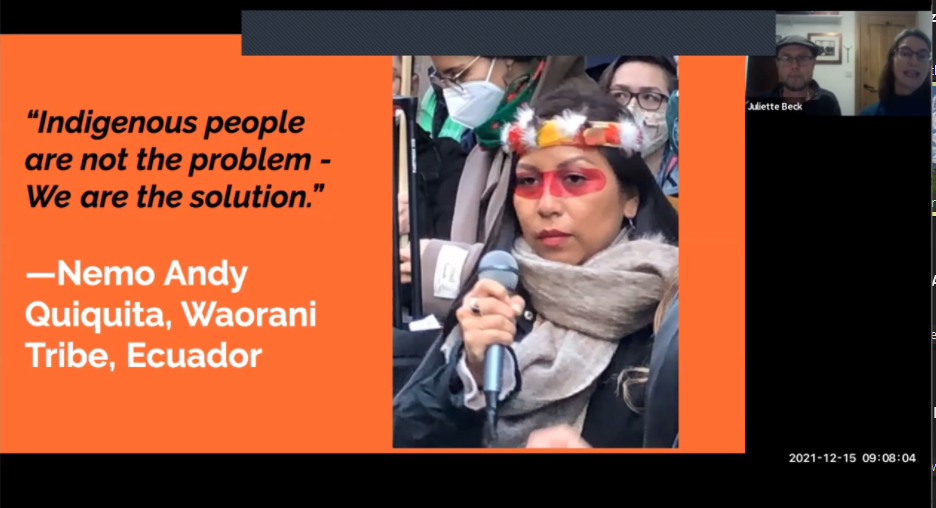 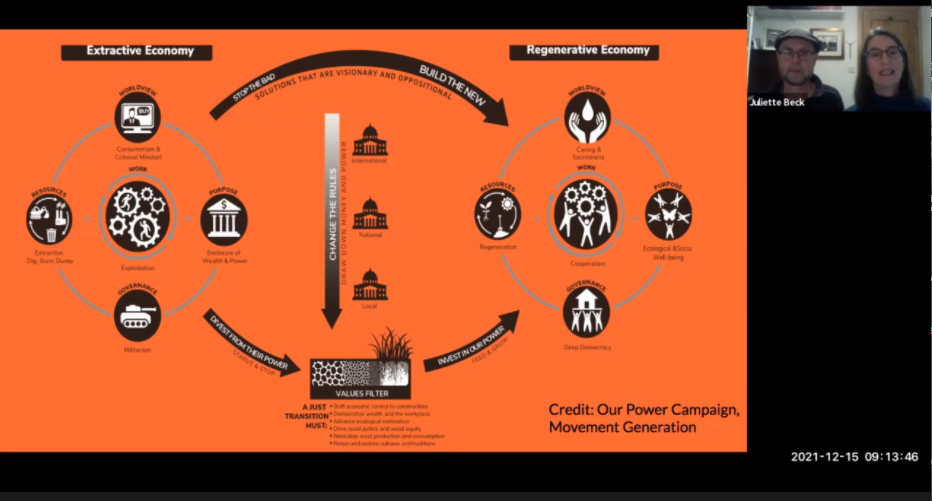 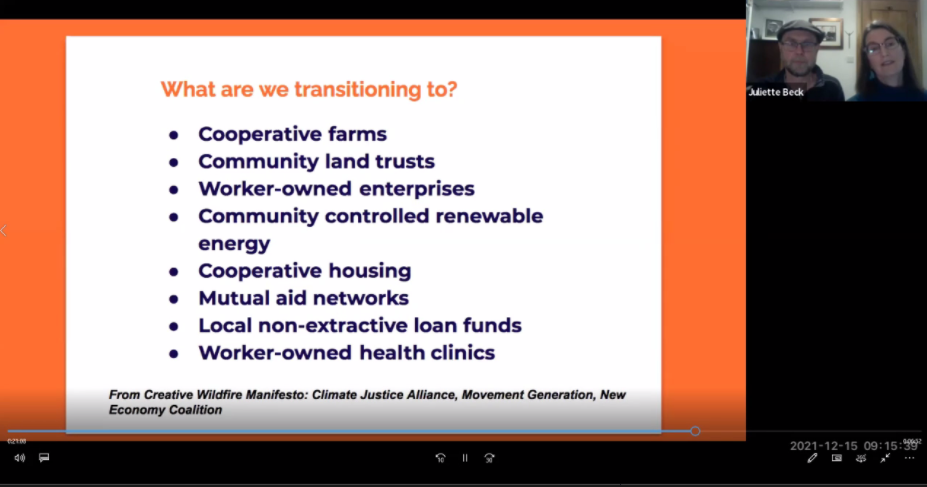 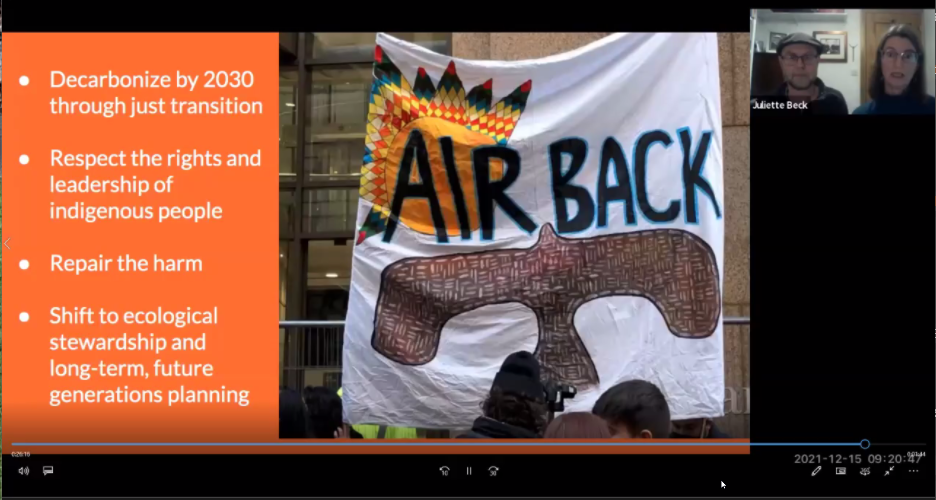 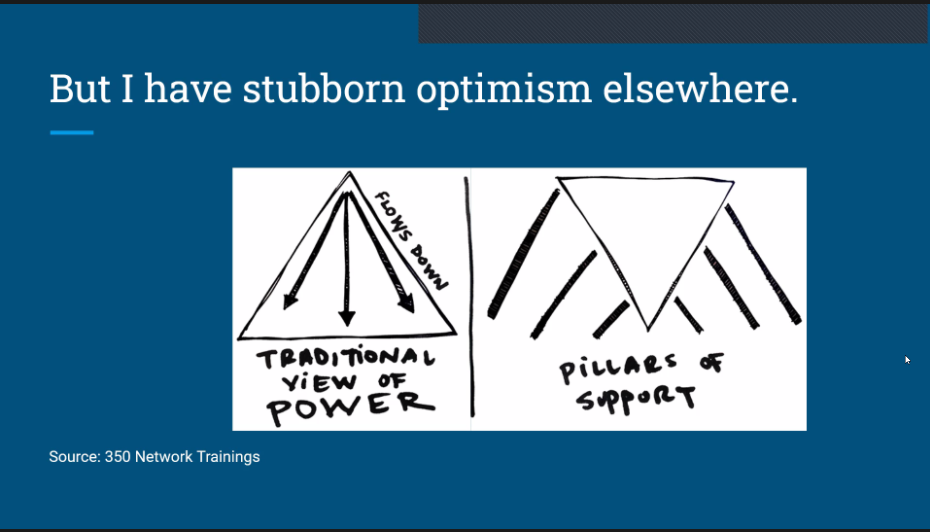 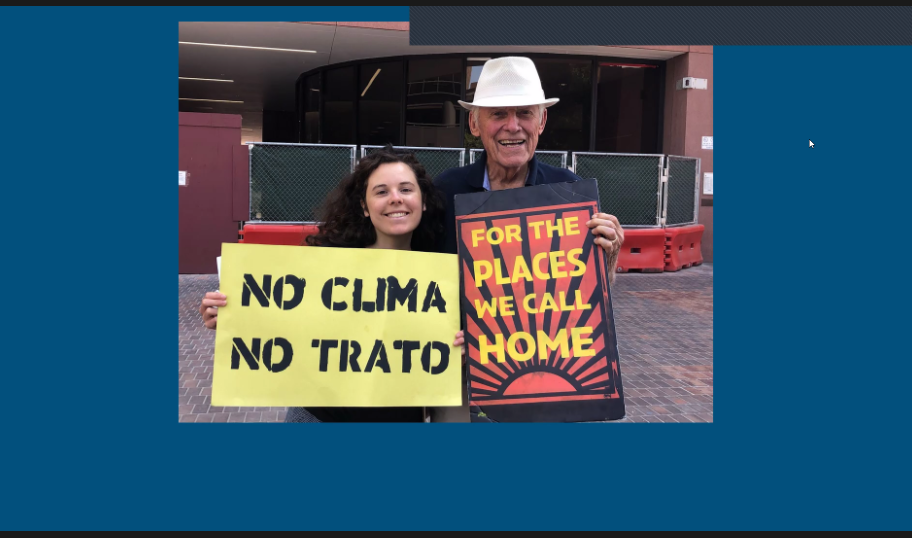 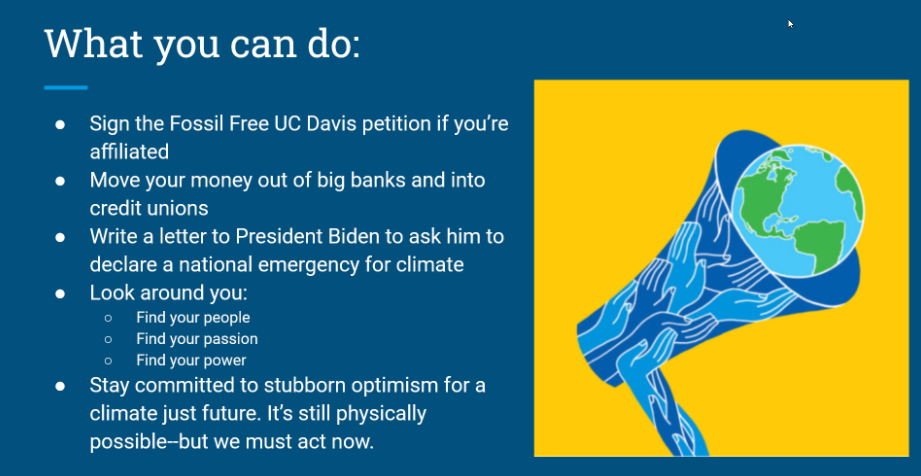