Home > Inspiration > COP26: Leadership Must Come from Below 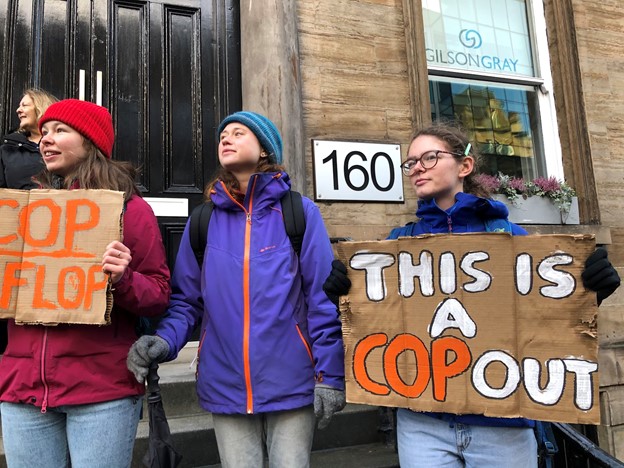 COP26: Leadership Must Come from Below

When looking at Earth from outer space, astronauts often experience a transformative shift in awareness called the “overview effect.”  They describe seeing a magnificent, swirling blue orb separated from infinite darkness by a thin silver line – our atmosphere. From this perspective, the fragility of our living planet and the pettiness of human borders become clear.

This past week, I saw our planetary home, not from above, but from below, through the eyes of people worldwide that are witnessing and resisting the systematic destruction of the Earth’s interconnected life-support systems. In my ‘underview’, I heard testimonies from the Amazon basin to the Niger delta to the Himalayan plateau to Australia and Turtle Island (North America) — the regions that have sustained civilization for tens of thousands of years that are now being flooded, eroded, scorched, denuded, and saturated with toxic chemicals, plastic, fossil fuel and waste.

Hundreds of community leaders had traveled to Glasgow, United Kingdom, from the frontlines of the climate crisis to urge the world’s governments that had gathered for the United Nations 26th annual Conference of Parties (COP26) to protect not only their ancestral homelands, but the livability of the planet for all humanity and future generations.

Wearing the brightly colored feathered headdress of her Waorani tribe, Nemo Andy Guiquita addressed a large crowd that had gathered in front of the Scottish headquarters of US multinational JPMorgan Chase, the largest financier of the fossil fuel industry globally.

“The animals are dying, the plants are dying, the rainforests are dying. Governments and banks like JPMorgan Chase that are financing the extraction of fossil fuels from our territories are criminals, killing our people, destroying our territories,” shared Guiquita, the director of women and health for the confederation of Indigenous nationalities of the Ecuadorian Amazon (CONFENIAE).

“Indigenous people (resisting fossil fuel extraction) are not the problem – we are the solution,” she stated proudly.

Indigenous tribes such as the Waorani of South America and the Standing Rock Sioux and the Wet’suwet’en of North America, are doing what leading governments have failed to do; they are battling the culprits of climate change — fossil fuel corporations and their powerful investors — whose extraction and production of oil and gas is at the root of the crisis.

As Marco Lemus, a young urban gardener from Richmond, CA, where Chevron’s oil refinery recently caused the closure of three schools from foul air, told the crowd, “We gotta keep that shit  in the ground!” 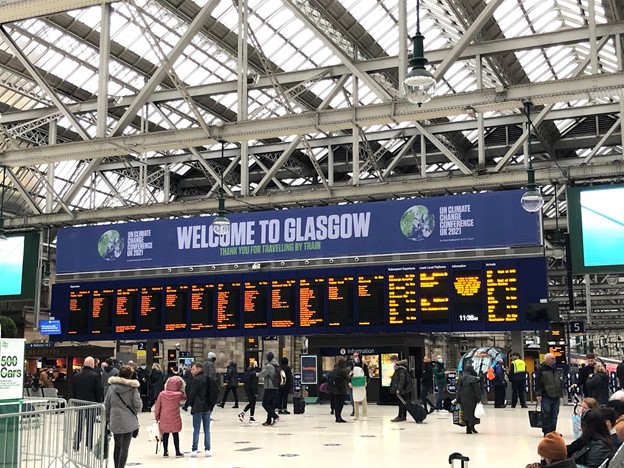 The official aim of this year’s COP was to implement the 2015 Paris Accord agreed by nearly 200 governments to keep global average temperature rise to no more than 1.5 degrees Celsius above pre-industrial levels. Climate Action Tracker estimates that the voluntary national pledges made at COP26 are less than half of what is needed by 2030. At this rate, with greenhouse gas emissions still rising, they predict a 2.7 degrees temperature increase by the end of the century.

Developed countries were also expected to make good on the promise made in 2009 to provide $100 billion a year to help highly impacted countries in places like the Pacific Islands and Sub-Saharan Africa that have already passed the 1.5 degree threshold and are struggling to cope with ever more extreme weather.

Many pointed to the return of the U.S. — the largest historical carbon emitter — as a sign of progress. Despite the welcome change in presidential rhetoric, behind the scenes, the US focused on dodging liability and opposing a key climate justice provision —  “loss and damage” payments to highly impacted countries. Biden’s decision, just four days after talks concluded, to launch an auction of oil and gas leases for a record 80 million acres in the Gulf of Mexico suggests sadly that there is no real change of direction.

While the governments at COP26 failed to bridge the emissions gap and create a roadmap towards an equitable, just transition from fossil fuels, other global institutions are making this task more difficult. The World Trade Organization, for example, is enforcing trade rules that empower multinational corporations — including oil and gas dependent energy companies — with turbo-charged “rights to profit” regardless of environmental impacts.

Research by UK-organization Global Justice Now shows that the same energy companies that fuel the climate crisis are using secretive, “corporate courts” written into trade deals to sue governments for more than $18 billion in response to climate policies that cut into their profits.  Energy giant RWE and Uniper have sued the Netherlands over its coal phase-out, while TC Energy is suing the US over the cancellation of the Keystone tar sands oil pipeline.

Considering the presence of more than 500 fossil fuel industry lobbyists at COP26 (larger than any country delegation), it is not surprising that the UN talks failed to produce clear strategies for phasing out fossil fuels. Former Bolivian ambassador to the UN Pablo Solon suggested that to have a fair and effective outcome within the COP framework, fossil fuel corporations should be banned from the talks, and representatives from indigenous nations and nature itself should be brought to the negotiating table.

While the events in Glasgow may seem far removed from our daily lives, the message from indigenous defenders of the planet is that “we all have a role to play.” The indigenous emphasis on buen vivir or wellbeing — instead of limitless consumption and extraction — offers a much-needed, alternative direction for society.

Domingo Peas of the Achuar tribe said on the US radio show Democracy Now! “ All of us have to work together — young people, old people, women, men, every sector of society, government. We must work together for our common future. And it is that transition, ecological transition, is what we’re seeking. And that work begins within ourselves. We must first change our relationship to nature, change the way we think about the world, and really put at the center of our thinking our connection to life and our commitment to future generations.”

We must work together for our common future. And it is that transition, ecological transition, is what we’re seeking. And that work begins within ourselves.

From a global “underview” perspective, our local governments also have a critical role to play in the transition to a low-carbon, climate-resilient, equitable economy. They can approve projects to expand highways, permit more mining and suburban sprawl on agricultural land, leave outdoor workers exposed to wildfire smoke and intolerable heat, or break from this “business as usual” decision-making to support ecologically regenerative, community-wealth building initiatives such as cooperatively owned businesses, farms, and housing.

As Greta Thunberg said at COP26, leadership will not come from above, it will come from below. We have to treat the climate crisis as the emergency it is, double down on stopping industrial extraction and focus on healing, repairing, and learning to live sustainably here and now.