Home > Local Business > US Banks are Financing the Climate Crisis 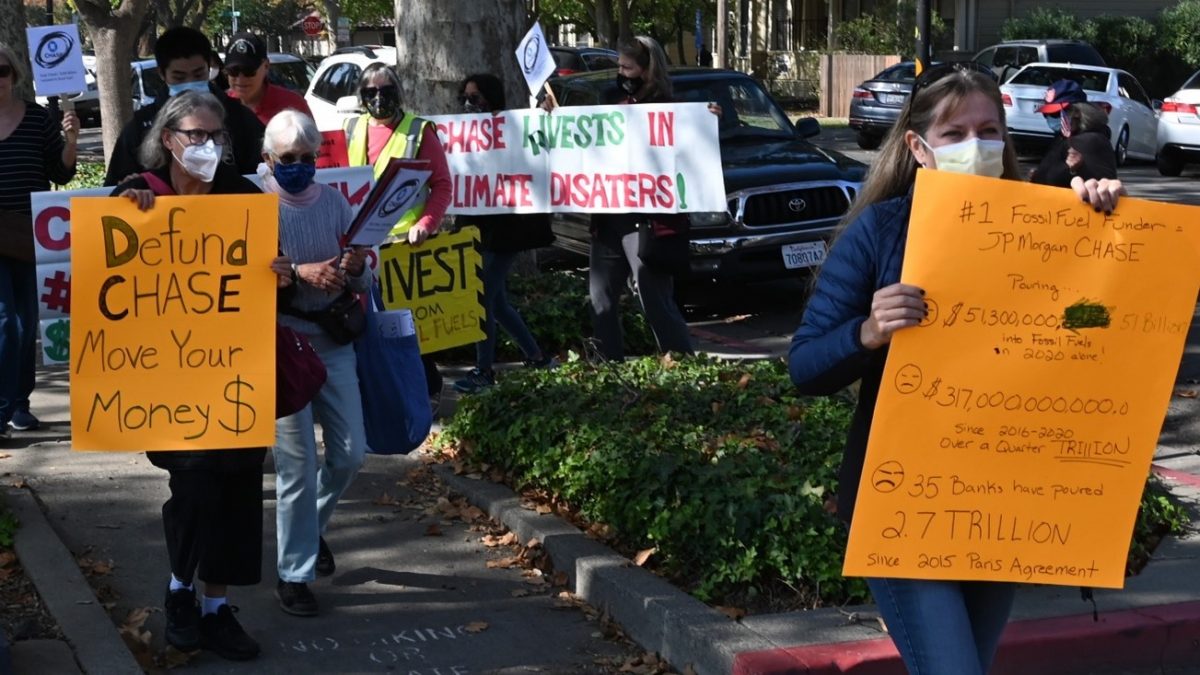 US Banks are Financing the Climate Crisis

A small but committed group of Davis youth and supporting adults gathered at the Chase Bank in downtown Davis on Friday, October 29, demanding that the bank stop funding climate destruction. Chase Bank is the world’s largest funder of the fossil fuel industry. In fact, in the four years since the Paris Agreement was adopted in late 2015, Chase has provided nearly $269 billion dollars to fossil fuel corporations that are building coal mines, oil pipelines, and fracked-gas terminals. That’s 36% more than any other bank in the world.

The Davis protestors were not alone. Seattle held a die-in of hundreds outside a Chase Bank on the same day, claiming that Chase’s practices lead to a life-threatening trail of CO2 emissions.

The Davis group marched, chanted, listened, and discussed outside the Chase Bank at 3rd and E Streets, waving signs such as “Chase Bank invests in climate disasters!” One Chase protestor Frances Burke remarked, “I am getting old and the planet I love is getting too warm. There isn’t much time left before we make our beautiful planet uninhabitable. I cherish life on earth and know we must each do all we can to save ourselves. So… I join others and protest.”

Eliot Larson professed with youthful urgency: “It makes me sick that the banks are not making absolutely necessary and critical changes and, therefore, are further endangering my future and the future of our Earth.” 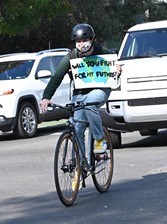 What’s in your bank?

Clearly our educational work is just beginning. Too many folks don’t know what their banks and insurance companies are doing with their money. For the last three years, global organizers have been building a powerful, nationally networked campaign to hold Chase Bank accountable for its complicity in the climate crisis. Rainforest Action Network, one of the oldest activist organizations in the US, is among the coalition that is challenging the top 4 U.S. banks that cause 33% of the problem of rising CO2 levels in our atmosphere: JPMorgan Chase, Wells Fargo, Citi, and Bank of America

Since 2016, these banks have financed 2,100 companies across the fossil fuel industry with no regard to the consequences on people and the planet. It’s a harsh indictment of U.S. banks as we come into the COP26 talks.

When Chase and other banks talk about reducing carbon emissions, they prefer to set goals for the year 2050. That is much too late. Climate scientists tell us we have less than 10 years to reverse course. Climate events ranging from sea level inundation, to inferno fires, to ever larger, more devastating hurricanes threaten not only human life, but whole ecosystems. Earth is experiencing code red now.

While Chase continues to fund deadlier heat waves, hotter fires, and higher floodwaters by investing in fossil fuels, their shareholders are demanding change. In response, Chase has stepped back from some coal projects and some drilling in the Arctic. Maybe public protest is beginning to work, which means protestors should redouble their efforts.

In 2021, we saw devastating climate disasters around the globe, including more disastrous wildfires plus searing heat and drought in California. Our government needs to stop adding fuel to the flames by keeping coal, oil, and gas in the ground and developing renewable energy instead.

Right here in Yolo County some farmers doubt they will plant summer vegetable crops next summer for lack of water, as increasing drought – partially created by climate change – is predicted. Our city of Davis is planning to urge, and, if necessary, require residents cut water use substantially.

Yet fossil fuel companies continue to produce as much gas and oil as possible, pursuing profit over people and the environment. They are addicting us to a deadly path, both for us and our planet. Burning fossil fuels is undeniably the number one contributor to the climate emergency.

There’s important work for us to do tipping the banks in the right direction toward solving the climate crisis instead of exacerbating it. Join us. Contact Lynne Nittler at lnittler@sbcglobal.net to join our local Davis “Chase: Stop Funding Climate Chaos” team. There will be more actions outside of banks in Davis. Now we must ramp up our actions.