Home > Community > Youth Leading the Way at the Capitol, SF, Across the Globe 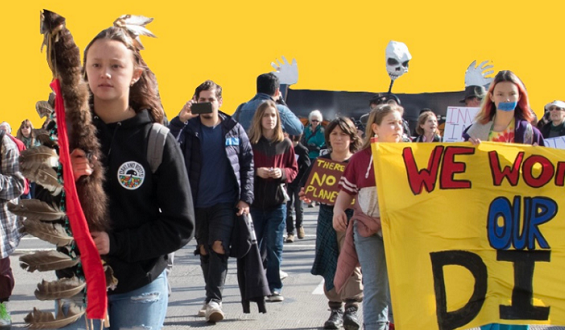 Youth Leading the Way at the Capitol, SF, Across the Globe

Fossil Free Future Day of Action. A coalition of youth and other groups across the globe — including the Youth Climate Finance Alliance, Stop the Money Pipeline, and the Future Coalition — have been organizing in advance of COP26. The plan is to shut down bank branches in cities around the globe to call out Wall Street’s greenwashed climate commitments. “By going after the banks that are financing fossil fuel extraction, we’re cutting off the money pipeline that is the fossil fuel industry’s only hope of survival in a world that is eager to transition to clean energy.”(Teen Vogue: “Big Banks Are Funding Fossil Fuel Projects — Let’s Hold Them Accountable” by Katie Eder and Shannon Carlson)

Find an event outside of Davis: https://fossilfreefuture.earth/

No. 1 funder of fossil fuel industry in the world!

If you can’t make the protest, email or phone your message to: https://fossilfreefuture.earth/resources. Scroll to “contact Chase” and follow the steps to make your thoughts known!

JPMorgan Chase is the world’s largest funder of the fossil fuel industry!

The truth about Chase: In the four years after the Paris Agreement was adopted in late 2015, Chase provided nearly $269 billion to fossil fuel corporations that were building coal mines, oil pipelines and fracked gas terminals ― that’s 36% more than any other bank in the world.

For the last three years, organizers have been building a powerful, nationally-networked campaign to hold Chase accountable for its complicity in the climate crisis. While Chase continues to fund deadlier heat waves, hotter fires, and higher floodwaters, their shareholders are demanding change. Chase has stepped back from some coal projects and some drilling in the arctic. Public protest is beginning to work, so let’s keep up the pressure.

If you decide to close your Chase Bank account now that you know the truth about your bank, let us know so we can interview you about your reasons!  Your decision may start a landslide of others!  Contact Lynne Nittler at lnittler@sbcglobal.net.

Youth demand that CEOs and Boards of U.S. Financial Institutions commit to the following:

Youth demand that State/Federal government officials commit to the following:

Youth demand that Local/State/Federal government officials commit to the following:

1A Legalize public banking. Introduce and endorse legislation to enable the creation of local and state public banks (such as the Public Banking Act introduced by Reps. Rashida Tlaib and Alexandria Ocasio-Cortez).
2A Invest in local communities and advance a sustainable economy. Call for a federal or state-led investigation of Wall Street institutions for their climate liability in financially enabling the harmful activities of the fossil fuel industry. 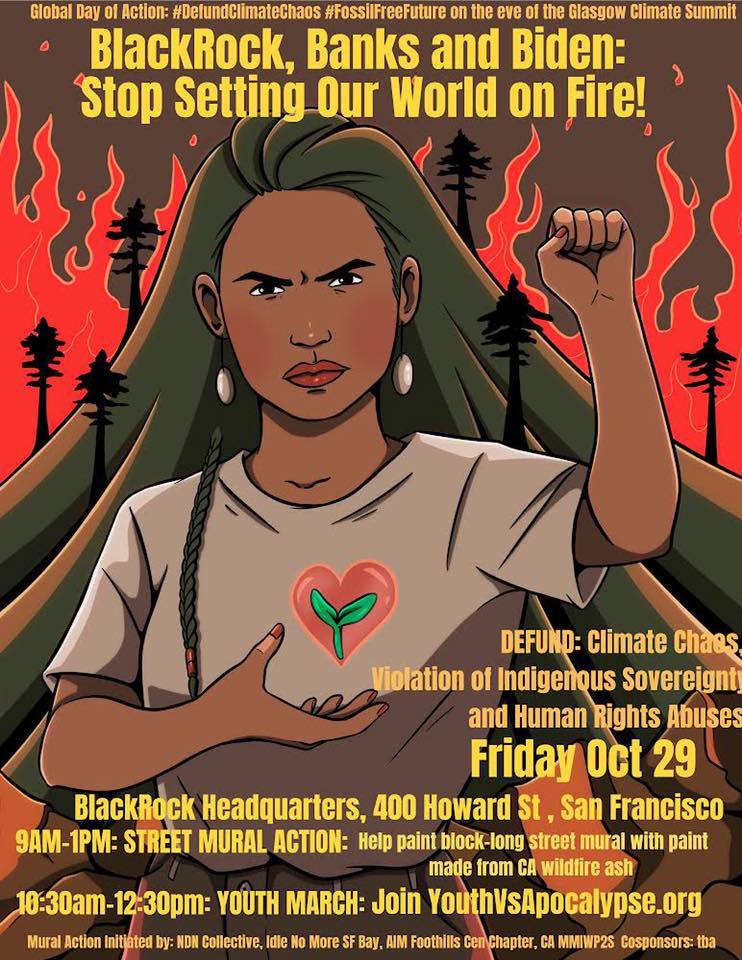 March for Stolen Lives and Stolen Futures in Sacramento

Busloads of students from the Bay Area, Sacramento, and Davis will be starting their demonstration at the steps of the California Teachers Retirement Fund (CalSTRS) building in Sacramento to demand the teacher pension fund divest from oil. Next, the group will march from the CalSTRS building to the Capitol with demands for the Governor. Marchers to meet at 11:00am at 100 Waterfront Place, West Sacramento. For Covid safety, please mask up. Easy parking ($6 per car for 2 hours). Rain or shine. Check out these many ways to act and show solidarity with this youth strike. Send letters of solidarity, make calls, send emails.

From the website: With the United Nations’ COP26 climate talks fast approaching, now is the time to call for climate justice and real climate leadership from all levels. We demand that:

In honor of the stolen lives of Black, Indigenous, people of color to police violence and environmental racism, and the stolen futures of the youth and unborn from the climate crisis, now is the time to call for climate justice and real climate leadership from all levels.