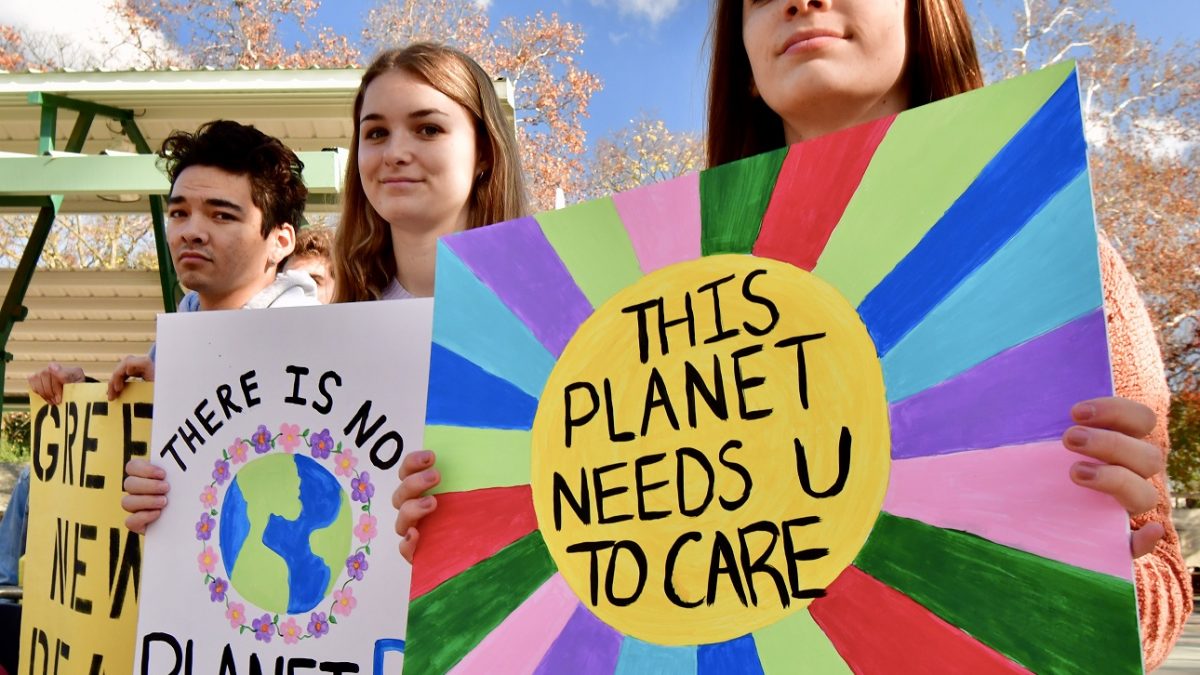 Davis Student Climate Leaders Speak Out! brings three local leaders to the public on Sunday, February 9, from 3-5pm at St. James Catholic Church, 1275 B Street, Davis, in the St. Ignatius Room. Each will present their reflections on the climate movement and their own futures in the movement and on earth. Student leader Marlen Garcia will also deliver an update on the CalSTRS divesment actions over the past few months in Sacramento. There will be time for questions and answers. After a quick refreshment break, the group will break into three discussion groups, each led by a student climate leader.

Where: St. James Catholic Church, 1275 B. Street in the St. Ignatius Room

This Cool Davis Coalition event is intended to raise awareness about what our youth are feeling, thinking, and doing, and to engage the community in joining their campaign to preserve a livable climate for all.

The presentations will be followed by youth-led discussion groups focused on meaningful climate action for all ages.  We urge you to stay!

Read more about the surge of climate activism in 2019 including youth efforts.

Everyone is impressed by the moral clarity and truth-telling of Greta Thunberg, the young climate activist who went on strike for the climate alone outside the Swedish Parliament in August of 2018 when she was just 15 years old.  Her youth movement, Fridays for Future, grew from there and culminated in at least 4 million climate marchers world-wide on Sept. 20, 2019.

This is where our own Davis Student Climate Leaders intersect with Greta’s movement.  They organized our own Davis Climate March last Sept. 20. Over 1000 students, parents, and community members marched from the library down B Street to Central Park.

Davis High School student Amber-Crenna-Armstrong decided to organize a Davis march to overcome her helplessness about climate change. Soon she gathered other concerned students and in less than a month they put together the whole march! She appreciates the network of committed youth she has met and the sense that they have a voice.

Hannah De la Calle, a UC Davis student of Ecology & Biodiversity, joined Sunrise Davis in 2019.  She leads about 10 UC Davis students in weekly Friday noon climate strikes that remind students on campus and Davis residents who pass the corner of 5th and B Street that the climate emergency continues!  She also offers testimony at CalSTRS (public teachers retirement pension fund) and CalPERS (public employee retirement pension fund) bimonthly meetings, urging them both to divest from their fossil fuel assets before they become stranded assets.  Sunrise Davis is committed to campaigning for Bernie Sanders, the candidate they support whole-heartedly.  Along with a national agenda to demand a Green New Deal, Sunrise Davis also has plans to work with local youth organizations to further efforts in Davis and Sacramento.

Megan Phelps, a UC Davis junior in Ecology, started a Davis chapter of The Climate Reality Project Corps at UCDavis last year. This fall her group put on “24 Hours of Climate Reality” with a different speaker every hour!  Her group also testifies for divestment at CalSTRS and CalPERS board meetings. They planned a hike to Pt. Reyes to renew their own connection with the natural world, which is so important to counter the discouraging climate news. They’ll share their next climate projects.

How to get in on the action: Sign up to be added to Yolano Climate Action google group for alerts to climate actions including divestment actions at CalSTRS and CalPERS, marches in our region, Climate Emergency Declarations in our region and many more.