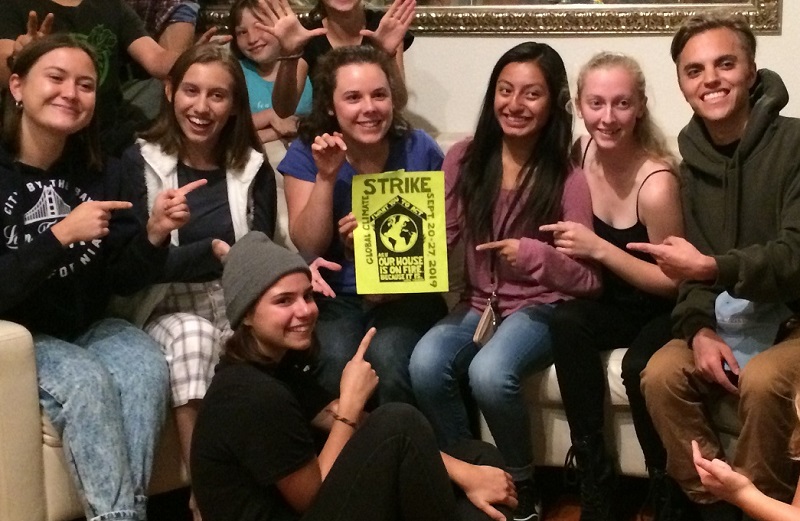 The year 2019 has been one of remarkable progress for climate advocacy. Educational and civic entities declared “climate emergencies” coupled with dramatic forward revisions of carbon neutrality goals. Announcements of divestment from significant fossil fuel asset portfolios by similar entities ensued, and youth demonstrations and activism blossomed on a sweeping scale, all accompanied by a year of increasing social and environmental impacts.

The wave of climate emergency declarations, including one by the City of Davis, washed over the globe in a short period, organized in part by The Climate Mobilization. Such efforts culminated locally with an emergency declaration resolution here in Davis in March, due to the work of several local climate leaders, adding weight to existing plans and moving our local timeline for full carbon neutrality forward to 2040 from the original 2050.

Another climate emergency letter, signed by the California State University and University of California systems, including UC Davis Chancellor Gary May, declaring a climate emergency in the name of 7,000 educational institutions worldwide was issued July 10 by the Alliance for Sustainability Leadership in Education, Second Nature, and the UN Environment’s Youth and Education Alliance. Embedded on a page titled The SDG Accord, the letter lays out a three-point plan that captures a collective commitment to address the climate emergency: mobilize more resources, commit to carbon neutrality, and increase delivery of related education. As of mid-October, the number of institutions represented had reached nearly 9,000 and approximately four million students.

The University of California set an ambitious goal of carbon neutrality by 2025 as long ago as 2014, now five short years away. Chancellor May commented in November via email request: “Climate change is one of the most important global issues of our time. I’m proud that UC Davis is on track to be carbon neutral by 2025. We are also working on a zero waste plan that will be under review in the coming months.”

As part of a three-year divestment campaign led by Fossil Free UC, as well as numerous student and faculty leaders, academic senates for all 10 University of California campuses including Davis passed a memorial urging the Regents to divest its fossil fuel assets. The memorial, which had previously received a 76.7 percent affirmative vote from the full Academic Senate, averaged across the campuses, was presented July 17 by faculty representative and Chair of the full Academic Senate Robert C. May. The UC Davis Academic Senate voted 70.1 percent in favor of divestment, the lowest total among the 10 campuses; UC Merced voted 93.3 percent in favor, the highest total.

Prof. May, a Distinguished Professor of Philosophy and Linguistics at UC Davis, stated that “UC faculty have joined many others in the UC community, including researchers who have made groundbreaking contributions to the understanding of climate change and students who have often spoken at Regents meetings. Divestment would represent the ongoing, significant reduction of fossil fuel in UC holdings and an increase in investments in renewable and green energy.” Professor May added that a “thousand years from now, this generation would only be remembered for what it did or did not do to address the climate crisis.”

Exactly two months later, Jagdeep Singh Bachher, UC Chief Investment Officer, and Treasurer and Chairman of the UC Board of Regents’ Investments Committee Richard Sherman authored an opinion piece in the LA Times, stating that “We believe hanging on to fossil fuel assets is a financial risk. That’s why we will have made our $13.4-billion endowment ‘fossil free’ as of the end of this month, and why our $70-billion pension will soon be that way as well.”

According to Bachher and Sherman, the UC system will be divesting approximately $150 million in oil, coal, and natural gas investments. “The reason we sold some $150 million in fossil fuel assets from our endowment was the reason we sell other assets: They posed a long-term risk to generating strong returns for UC’s diversified portfolios,” Bachher and Sherman wrote.

A few days after the UC Academic Senate memorial was presented, peaceful climate strikes kicked off worldwide, throughout the week of September 20 to 27, organized by youth and the Fridays for Future movement, which was started by Swedish teen Greta Thunberg. According to 350.org, 7.6 million people poured into the streets in 185 counties, including 1,000 at Davis Central Park here in Davis. Local youth of all ages were energized and mobilized on the issue like never before.

Following the first student strike, local students gathered September 27 with 14-year-old Alexandria Villasenor, an international climate youth leader who has moved her homebase back to Davis after months of striking at the United Nations in New York. Many youth have continued striking on Fridays, and some have begun or continued striking at the Capitol. Both Sunrise Movement and the local Climate Reality Project groups on the UC Davis campus have been very involved in the strikes and are committed to sustained and, in some cases, aggressive action.

After the strike, DJUSD parents focused attention on the development of two MPR buildings at Chavez and Birch Lane campuses, advocating for all electric and energy-efficient approaches.

As part of the last four bi-monthly board meetings, youth from Bay Area groups Earth Guardians and Youth vs Apocalypse, as well as members of the UC Davis Climate Reality Project and Sunrise Movement, have testified during public comment, urging CalSTRS to consider their futures and divest.

At the September 4 meeting this year, California Treasurer Fiona Ma, who sits on the CalSTRS Board, announced her support for divestment. In a later press release, Ma stated, “Where we invest our money reflects our values, and we should be valuing a clean energy future for California. These brave and passionate students are reminding us of that.”

by Leslie Crenna and Lynne Nittler

Leslie Crenna is Communications Manager for Cool Davis and member of Water Wise Davis; Lynne Nittler is a founding board member and continuing volunteer with Cool Davis who plays many other roles in our community including as an activist.