Home > Transportation > Why I Ride: A conversation with Clark Fitzgerald 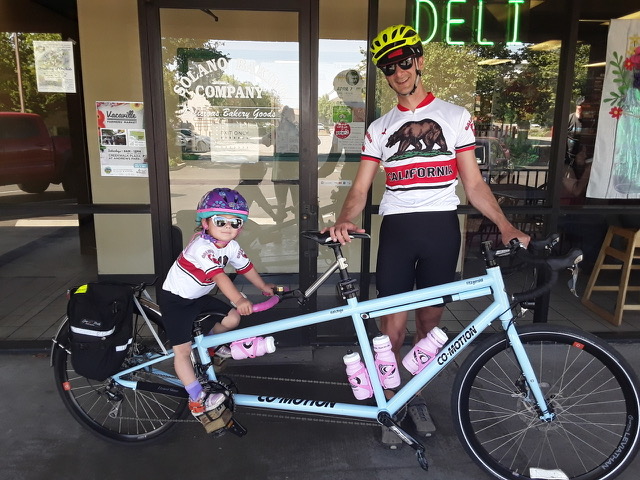 Why I Ride: A conversation with Clark Fitzgerald

Clark Fitzgerald first started riding a bike on a consistent basis in 2007. He came back from Afghanistan, where he had been deployed as a member of the military, and took some time off for about a year, riding his bike on frequent one-week trips.

“I was hooked on riding,” he shared. “But also, I didn’t want to blow my money on a car at the time.”

He and his wife are indeed a one-car family, using bicycles as a primary means of transportation. Clark has two bikes that are at opposite ends of the spectrum. “I have a pricey tandem that we bought instead of a second car, and then my touring bike, which is a 1992 Bridgestone MB3 that I use for commuting to UC Davis where I am a graduate student in statistics, as well as to take my two children to day care and the pool. The commuter bike is a total beater!”

The family’s one car is a mini van that can fit the tandem, a CoMotion PeriScope, enabling Clark’s 3-year-old daughter to fit on the back at only 3’2”, or Clark himself at 6’1”. Clark first started riding a tandem with his wife, and now enjoys having his daughter on the back as a co-pilot often.

His daughter recently had the pleasure of getting lots of attention when Clark joined a Davis Bike Club group ride from Davis to Dixon, with a stop for donuts at the halfway point. “She was certainly the talk of the group. She’s the youngest rider that’s ever been out with them. I think she really liked the attention from all the other riders, and liked dressing up in matching outfits too.”

Although Clark enjoyed the group ride, he is mostly an independent rider. In fact, one of his favorite activities is taking his bike on solo trips, like the recent overnight trip he did in the mountains of Northern California. “I’m pretty into it as a lifestyle,” Clark confessed. He writes about his cycling life on a personal blog. “It’s really for my personal use, so I can remember these experiences when I’m old and grey. I also share my blog with our extended family.” 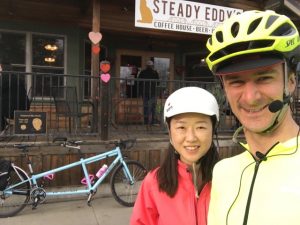 Clark thinks bike riding is more efficient in a lot of ways than driving. “Also, I like being a part of the environment, not trapped in a car.” That love of efficiency carries through in Clark’s attitude about cycling in general (“People should do what they want to do when it comes to cycling”), about cycling apparel (“I always thought the roadies looked kind of funny with their lycra and spandex”), and types of cycling (“I’m unpretentious about cycling, almost like an un-racer”). That relaxed attitude seems to be working well for Clark, whether his two-wheeled adventure is a backroads riding and backpacking trip into the mountains, a tandem ride at a relaxed pace with his wife to spend quality time together, his commute to campus, or a tandem ride with his daughter in an organized group ride with the “roadies,” matching lycra and spandex outfits included.

—This article is written by Lisa Montanaro.  Commissioned by The Bike Campaign.  For more information about how to “Drive Less. Ride More,” contact Maria Contreras Tebbutt at funmaria@sbcglobal.net or www.TheBikeCampaign.com

Crossposted from the The Bike Campaign