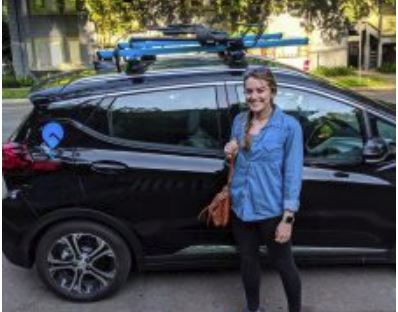 Gig car model you use: Bolt. Unless I’m in the Bay Area, where I use the Prius C.
Where you use Gig (Bay Area/Sac): Both! But mostly Sacramento.
When you started using Gig: I started using Gig in February. I was able to beta test for Gig before the public launch in April.

Gig Car Share is a new service that provides access to all-electric vehicles in Sacramento and hybrid vehicles throughout the Bay Area. Gig allows users to choose the duration of their drive and provides the flexibility to pick up and drop off their cars in different locations. Users are able to park in a wide range of spots within the service territory, and can pay by the mile, hour, or day—whichever rate is lowest. More than 200 Gig cars are available in Sacramento, representing the nation’s largest all-electric car fleet.

What kinds of trips do you use Gig for?

I use Gig for a variety of trips. The most useful to me is getting to and from the Amtrak station. It is the most affordable option and feels the safest when I get in late. I also use Gig when the weather is bad to get around downtown, or late at night to get back home when I don’t feel safe walking alone.

What made you decide to go start using Gig?

I’ve used similar carsharing services in other cities I’ve lived in and enjoyed the freedom and convenience of being able to drive the car one way and then choose how to get back. I was very excited to learn that Sacramento would get the first all-electric carsharing service and even more excited to learn how affordable it is. There was no downside to signing up since Gig has no membership fee, and I thought it was a cool way to drive an EV for the first time.

What have been the biggest challenges of using Gig?

Since Gig is a new service, there have been a couple of minor bugs with the Gig app. The customer service has been great in resolving issues quickly, though. I have no complaints about the actual carsharing service. It’s affordable, convenient, and accessible. I still own my own car, but Gig is often a better choice if parking costs money, or if I only want to drive one way. I just wish Gig were available further outside the downtown area, including in Davis.

What are the biggest misconceptions of Gig/carsharing?

People seem to not understand the one-way carsharing concept. They often assume that Gig is similar to Zipcar, where you must return the car to where you picked it up. Actually, Gig is more like Car2Go and JUMP. You find a car on the app and then take it to your destination, where you can park on any public street with a 1-hour or more limit (in Sacramento). The cost of charging/fuel, parking, and insurance are all included, and the trip is billed based on distance and time. No need to worry about racing the clock or finding a charging station!

Describe one of the farthest/coolest/most ambitious trips you’ve ever taken using Gig.

Just last week, Gig started allowing rides in the Prius C Gigs between the Bay Area and Sacramento. I was in San Francisco for a late seminar, and a car accident on the Bay Bridge caused a friend and me to miss the last Amtrak train back to Sacramento. Luckily, we found a GIG and a promotional deal got us both all the way home for just $22!

Do you have any good stories about your experience as a Gig user?

I have never had an eventful trip in a Gig, which in my opinion is a good thing. The service is reliable, quick, and provides a nice back-up option if I find myself caught in the rain when I had planned to walk, or out past the time transit stops running. Gigs are also all equipped with bike racks in case I ever get stranded with a flat tire.

What is the number-one thing you think could be done to encourage more people to use Gig/carsharing services?

Advertise! I’ve had a lot of strangers ask me about Gig when I’m getting in one. I think the company is doing a good job with billboards and referrals, but it might be helpful to put a flyer on the Gigs to help people learn what they are and how easy they are to use.

The EV&Me blog was created by Hannah Safford and is now managed by Cassidy Craford, student assistant for the UC Davis Policy Institute for Energy, Environment, and the Economy.  The original post is located on the UC Davis Institute for Transportation Studies web page. Browse on over for instructions on how to submit your EV story!