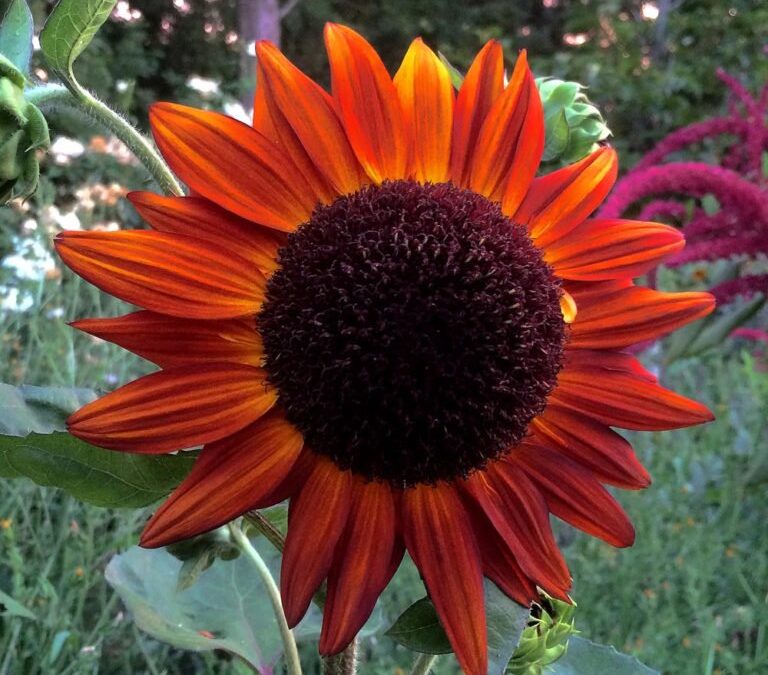 During the last two weeks of May, we were more than 13 degrees below our average high for the date. One day barely reached 58 degrees, when our average was 82! Nighttime lows were significantly below average, and well below the temperatures preferred by the subtropical plants that make up our summer vegetable and flower gardens. Soil temperatures mid-month began dropping, reaching levels more typical for early April. At one point, soil temperature was dropping one degree each day. We had nearly 3 inches of rain (2.88) when we normally get about half an inch.

Of particular note for disease concerns, we had a four-day period of intermittent rainfall with little break in the cloud cover. Moisture conditions on leaf surfaces were very favorable for inoculation and spread of fungus and bacterial diseases.

“Is all this wacky weather having an effect on the garden?”

You bet. Ag took a hit on some crops as well. “STOCKTON — California’s cherry crop has been significantly damaged by rain, shortening supplies for upcoming Memorial Day sales. The crop was originally estimated at 10 million, 18-pound boxes with many in the industry expecting it could reach 12 million boxes. ‘I’m still optimistic we will come out with 6 to 7 million after the rain finishes,’ said Don Walters, domestic sales agent for Grower Direct Marketing in Stockton. … Most damage was to the early Tulare and Brooks varieties in all growing regions, Walters said. The Bing crop east of Stockton was still green enough to escape damage and should be a good crop the second week of June, he said.”[1]

We are already seeing renewed cycles of disease infection on fruit trees. A couple of days before the first storm blew in, I heard spray rigs operating in most of the walnut orchards around where I live. The growers were trying to get a round of fungicide on before the soil got too saturated for tractor work. A quick walk in the orchard found fireblight, brown rot, even mildew on young shoots and fruits.

From my ongoing notes about trending disease and pest problems, here is the parade of samples the second half of May:

And that doesn’t include all the damage from earwigs, slugs, snails, tree rats, squirrels, and, in one case, an errant cottontail. Leaf diseases of roses returned for another full cycle of infection: downy mildew, rust, and powdery mildew. Large flowers such as marigolds and heavy-petalled roses were damaged by botrytis, a mold that attacks the petals and then progresses into the bloom and the flower stem. With continued rainy weather it can progress further into the healthy part of the plant, so it’s advisable to trim out rotting flowers. Just shaking off the water droplets after the storm is actually helpful.

Before you reach for a fungicide, consider whether they are necessary or effective or might have environmental impacts. Most fungicides are preventative, not curative, meaning they only work if sprayed before you have symptoms. Some affect beneficial insects. Much of this damage is cosmetic and temporary.  We mostly just ride it out and wait for higher temperatures, and especially lower humidity, to stop further spread of the diseases.

Badly infected leaves can be picked off and discarded. Roses can be cut back hard to stimulate new growth. Fruit thinning of stone fruits is normal, even somewhat desirable. Remove fruit that have blemishes to encourage remaining fruit to be larger and to prevent limb breakage. Peaches and nectarines especially benefit from having excess fruit thinned. The old rule is that remaining fruit should be “one fist apart” on the branch.

We saw some non-disease impacts as well: physiological disorders of the plants due to cold soil and lack of sunshine. Older leaves of citrus trees are yellowing, a normal part of the growth cycle at this time of year when nitrogen is mobilized in the plant to the new growth. But that new growth is barely happening yet because temperatures were well below what these subtropical trees prefer.

In some cases, there has been root damage from saturated soil conditions. People are sending lots of pictures of young trees that are yellow, failing to grow, and even dying back. My suggestion is to provide some nitrogen, and water deeply and infrequently when you start the irrigation season (there’s still plenty of moisture deeper in the soil from winter and spring rains).

Many of the vegetable plants that we grow are subtropical or tropical in origin and not adapted to temperatures below about 55 degrees. Peppers, eggplant, watermelons, and okra are especially cold-sensitive and will likely be stunted for a while. Leaves that were emerging at the start of this odd weather period will be yellow (roots couldn’t take up nitrogen), and will be curled, cupped, or distorted as they expand. Soil that is cold and wet leads to ‘tomato leaf roll’, where the tomato leaves curl outward and appear droopy. This is temporary. We can expect to see a lot of blossom end rot (mushy, rotting part of the bottom of the fruit) on tomatoes, peppers, and zucchini squash that had set already. That is likely to show up in 5 to 6 weeks as the fruit finishes expansion and begins to ripen.

The effect on peppers, eggplant, and okra could continue well into this month. Each day of cold temperatures sets the plant back several days of growth.  If you planted early this year, those plants may not yield well for quite a while, if at all. It may be worth planting a few new, healthy plants when the soil warms up. Tomato plants are more vigorous and will likely rebound with just a few days of warm weather.

Trouble ahead for shrubs and trees?

As it warms up quickly, and people start watering their landscapes frequently, I expect to see crown and root rot of susceptible woody plants. The pathogen is phytophthora (see our April 3 article). Many of our California native shrubs, Mediterranean species such as lavender and rosemary, and species from South Africa and Australia are vulnerable. The “symptom” is sudden death of the plant.

If you water too often as it warms up, they’re at risk. “Too often” means keeping the soil moist around the base of the plant, usually from daily irrigation. Water carefully as the temperatures rise. Deep soakings of established plants at long intervals (at least a week apart) are safer than frequent irrigation. The key to preventing crown rot is to allow the surface of the soil to dry somewhat between waterings.

Some annual and perennial flowers that thrive in our hot summers have been unhappy about the cold, rainy conditions, growing slowly and failing to bloom.  Examples include cosmos, portulaca, annual vinca, and zinnia, and perennials such as lantana and verbena. These are all best planted in summer.

June is an active month in the vegetable and flower garden

In June we continue to plant tomatoes, peppers, eggplant, squash, cucumbers, basil and more. The soil is almost warm enough for the super-hot peppers in the “chinense” group: ghost pepper, Carolina reaper, Trinidad scorpion and habanero. Early planting gives no benefit for these heat-lovers. Continue planting bush beans and corn every two to three weeks into mid-July for successive crops to harvest into fall. Sunflowers can be planted for several more weeks. June is the best month for planting melons and okra and pumpkins. It’s a great time to plant summer flowers and perennials.

Isn’t it too late to plant?

The characteristics that affect successful transplanting are air and soil temperature, wind and humidity (factors in evapotranspiration), root condition and preparation as you plant, susceptibility to crown rot, soil moisture status, and after-care (watering). Plants vary as to which matters the most. Warm soil and moderate air temperatures lead to fast root and top growth after transplanting. Brief hot spells are not harmful if the plants are properly watered.

That last factor, proper watering, is the key when planting in our dry season. Smaller plants need water daily for the first couple of weeks, then can be watered deeper and less often. Perennials, shrubs, and trees planted from larger containers need water every two to three days for the first two to four weeks, then can be adjusted to the watering schedule you’re using for your established landscape.

— Don Shor and his family have owned the Redwood Barn Nursery since 1981. He can be reached at redbarn@omsoft.com. Archived articles are available on The Enterprise website, and they are always available (all the way back to 1999) on its business website, www.redwoodbarn.com.