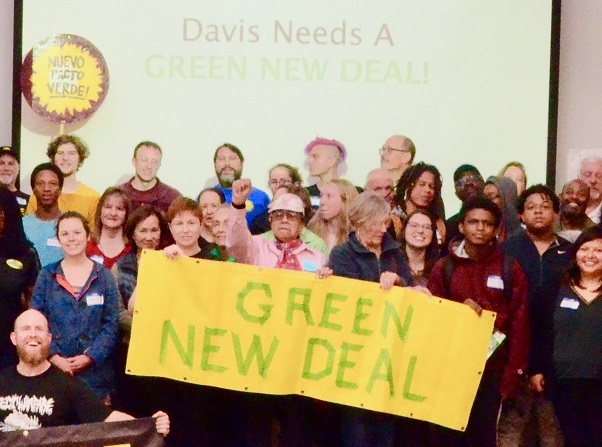 More than 120 gathered May 25 for a town hall style meeting from a collection of environmental, social justice, and labor organizations — under the umbrella of the District 3 Coalition for the Green New Deal — to discuss local action to further federal Green New Deal legislation. Representing a range of ages from high school to octogenarians, a variety of races, backgrounds, skills, and professions came together for a few hours to map out steps to further the goal of averting a climate crisis in the making. Representatives from the Young Democratic Socialists of America, Yolo County Progressives, Mothers Out Front, University Professional and Technical Employees, the Sunrise Movement, and scores of members at large were present.

The Green New Deal is a resolution introduced in Congress with 93 co-sponsors in the House and 12 in the Senate that seeks to set an agenda for the United States to combat climate change and to do it in a manner that respects local decision-making, emphasizes the need to provide good jobs in growing green industries, supports the disadvantaged and marginalized communities that will be most impacted by the effects of climate change, and taps the energy of the great diversity of this country.

Concerns coalesce from across the region

This was not just a gathering of Davis locals. Fully half of attendees were from outside the area, including people from foothill communities, up valley as far as Redding, and from Vallejo, Berkeley, and other Bay Area towns. On my left sat Alan, a middle-aged man from Calaveras County. His primary concern is clear cutting, which he described as the second most damaging activity to the climate after fossil fuel extraction and use. On my right was Jamal, a young African American man who works organizing low-income workers. He was most concerned that his communities be heard and not ignored as is so often the case.

Dov Salkoff, a member of the Young Democratic Socialists of America (YDSA), helped organize the event. He asserted that “The climate crisis will not be solved with a technological fix or market self-correction. We have an economic system that exploits people and the environment, and this fact is beginning to threaten life itself. The Green New Deal gives us an opportunity to collectively decide how to best organize our communities so that working people and marginalized communities are no longer left behind. That’s why myself and others in the YDSA organized this event.”

Speakers referenced the past, planned for the future

The activities began with a short Native American ceremony to honor the Earth and all it provides. Adelita Serena of Mothers Out Front explained that native peoples have been fighting environmental destruction for at least 500 years. They’ve lost a lot but have learned to be resilient.

Casey Parks of Chico spoke about the role of Exxon-Mobil. Exxon-Mobil and other oil companies knew of the potential in the early 1980s, after conducting substantial research by outfitting tankers with sampling devices to get a picture of worldwide increases in CO2 concentrations. Convinced that the research conducted by their own scientists told a story that could potentially be bad for business, they decided to suppress it. In 1988, Congress heard the first testimony linking the burning of fossil fuels to inevitable increase in temperatures with potentially disastrous effects.

There was a consensus among the attendees that efforts to work with the Democratic Party establishment should be continued. A good example was the successful work to convince John Garamendi, Congressman from our District 3, to support the Green New Deal. At the same time, it was expressed that a great deal of energy must be directed to support more progressive leaders who offer real opportunity to change the political landscape and aggressively move to curtail climate change.

Speakers emphasized the need to take back the power the people have in a democracy, not ceding it to big business or big money. Other speakers acknowledged that individual Republicans can be awake to the problems presented by climate change, but as a party there seems to be little interest in considering alternatives to a fossil fuel-based economy.

Town hall participants were committed to not letting another 30 years go by without significant steps being taken to curtail greenhouse gases. This inclination is borne out by a recent regional environmental poll which found that the vast majority in the Capital Region want stepped up action on climate. The poll produced by the Institute for Social Research at Sacramento State and partner Valley Vision reported that residents are “calling for stepped up action from public institutions, companies, and all of us.” According to the executive summary, “these are consistent viewpoints no matter political party, age, relative wealth, or where you live.”  According to a 2018 UN climate study, we now have less than 12 years to reverse the trend to avoid its most serious consequences.

The town hall wound up with small groups, divided by geographical region, discussing issues and action steps they would take in local areas. One of the two Davis groups decided to approach our two state representatives, Assemblyperson Cecilia Aguiar-Curry and Senator Bill Dodd, to encourage them to support climate change legislation at the state level. Another decision was made  to monitor the Davis City Council to make sure it follows through on the commitment it made recently in passing a climate emergency resolution. The organization behind the climate emergency movement, The Climate Mobilization, provides training on how to propose resolutions. Read the full text of the Davis climate emergency resolution.

The other Davis group decided to become more active in local Democratic political organizations to ensure that climate change issues are put at the top of the agenda. A group of Chico and Davis students committed to trying to further climate change resolutions through student government and to support other student actions intended to educate students and the general public about the Green New Deal.

A Yolo County group, primarily Woodland residents, committed to encouraging any area city that has not passed a climate emergency resolution to do so. They also recognized that the PG&E bankruptcy presents an opportunity to try to change the rules it will need to follow in the future. The Sacramento group committed to holding more town hall meetings in the coming year with an emphasis on low income communities, communities of color, and community colleges — since disadvantaged communities and young people will bear the worst of the impacts of climate change. The foothills group discussed the need to limit clear cutting and to find ways to convince rural residents that climate change threatens the beautiful natural areas they live in.

Three things attendees were asked to do as individuals

The organizers of the event ended by suggesting three things anyone can do:

Organizations with members supporting the Coalition include

Read the Davis Vanguard article about the event

For more information on these and other possible activities, contact caldistrict3gnd@gmail.com.