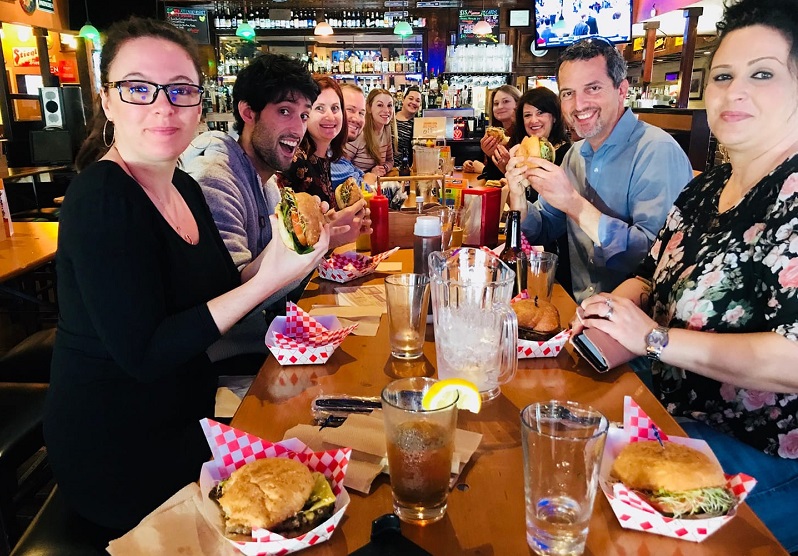 The COOL Cuisine Burger Battle energized the Davis dining scene with some Earth Day friendly food this past March when downtown and UC Davis campus restaurants sold over 5,000 planet-friendly burgers to enthusiastic locals and a surprising number of out-of-town visitors.

There were table tents seen in windows on many blocks with the signature, colorful Burger Battle logo created by Sue Kear, with its inviting golden bun beckoning diners to come try a new delicious competing plant-based burger.

Of particular note, nearly all of the 17 competitors were rated highly in categories such as taste, creativity, and presentation in online ratings.

The COOL Cuisine Burger Battle planning committee has tallied up the votes and collected the awards presented by community tasting teams to be presented alongside the Environmental Recognition Awards in honor of Earth Day prior to the City Council meeting Tuesday, April 23 at 6:00 PM. Everyone is invited to come honor the inspired chefs as they receive their prizes. 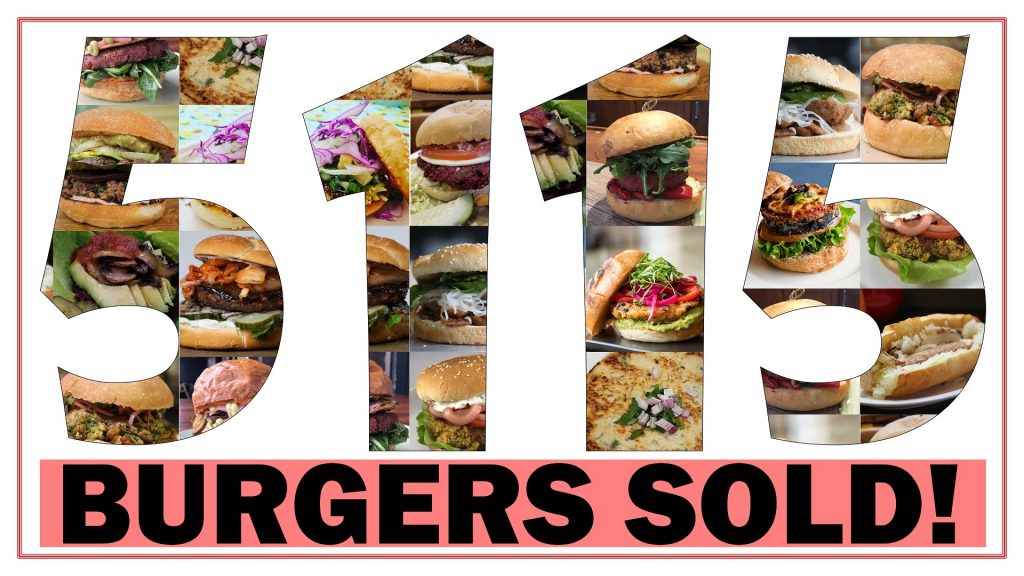 Goals surpassed in all categories

Event organizers exceeded their goals for burgers sold (5,115). The percentage of burgers rated (16%) was more than double the percent in the Great Sacramento Vegan Burger Battle last June. Several restaurants more than doubled their sales of similar burgers and the competing burger was among top selling items for them as well. Participation was high and 20 tasting teams donned names like the Center for Burger Eating Efficiency, Double Date Dream Team, and The Phoenix Pheasters to sample at least four burgers together. Most importantly, the goal to introduce omnivores to plant-based entrees, was deemed a success because 52% of raters identified personally as people who eat meat in their diets.

Most people had so much fun eating and discussing the burgers with dining partners, they were too distracted by the taste-bud explosion to bother to vote. Claire Black-Slotten went to five restaurants and said she “was so engaged with friends discussing the burgers, I forgot to vote at all!”

The 17 different burgers presented were well-received. Voters rated each a four or higher (on a five-point scale) on 80% of their ballots. Over 820 ballots were received from 345 individuals. Diner comments indicated that the chefs got so creative and the burgers were each so unique that it was very difficult to compare or pick favorites.

Each plant-based offering was quite unique. Impossible Burger and Beyond Burger brand meat simulations rated highly as “similar to real meat”, but so did the seitan entry from Chay Corner. One voter commented on the Bistro 33 Impossible Burger, “It tasted almost identical to real meat, and the patty had the juiciness and consistency of a real beef patty.” Another commented on the de Vere’s Irish Pub Beyond Burger “If I didn’t already know I don’t think I would have guessed it wasn’t meat.”

The other competing burgers were vegetable, grain, and/or nut-based and not intended to mimic meat. For instance, the Davis Food Coop’s Pakora Burger. One diner said about the Davis Food Coop’s Pakora Burger, “You actually feel good after eating this burger. You can tell the ingredients were fresh! The burger was unique in its flavor palate and wasn’t trying to be something it’s not.” Another said about the Smokin’ Ewe BBQ Smokey Quinoa Portobello Burger, “The patty is the star.  The flavor of the patty enhances every other aspect of this creation.” 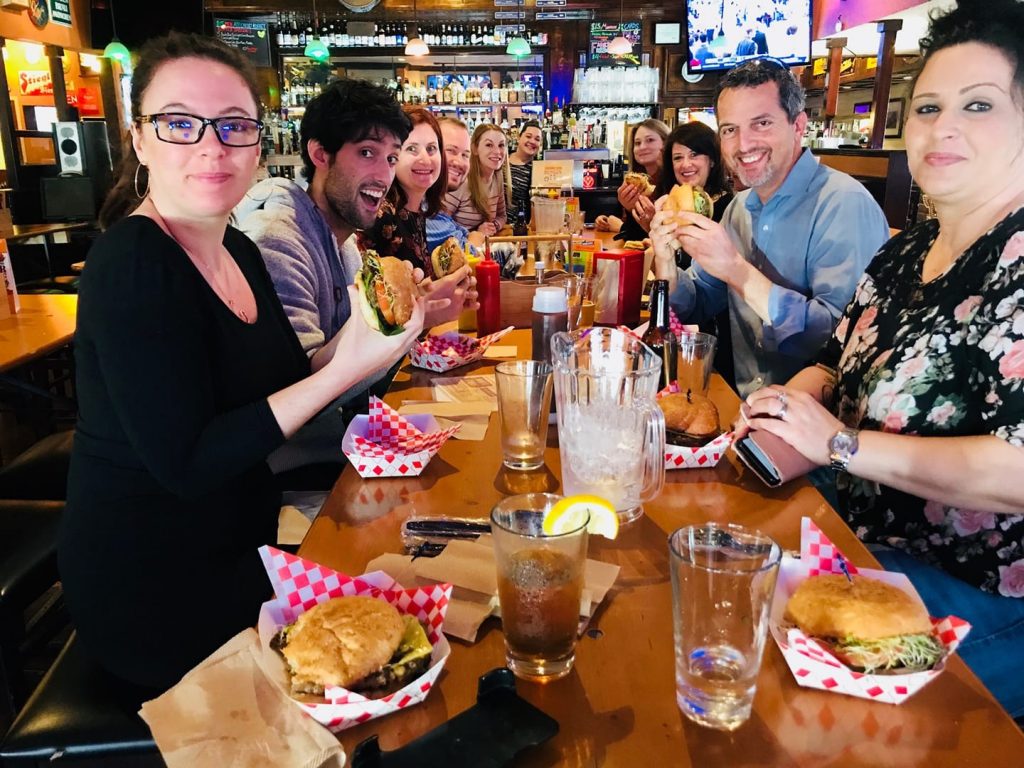 More than half of the voters have some meat in their regular diet: the other half identified as vegetarian or vegan. The success of this contest demonstrates restaurants should offer more dishes that are “accidentally” vegan and all diners can enjoy.

The event created an economic stimulus of approximately $74,000 between downtown and UC Davis: $54,000 for the burgers plus an estimated $20,000 for side dishes and drinks. Even though some of those might be people who would have bought other menu items, that is a nice boost! Terry Brooks, the Davis Food Co-op chef said the Battle “created a large influx of new customers coming to our store.”

A statistic that City businesses and officials might find of interest is that 27% of voters were from outside of Davis – the event had an apparent strong draw. It created a positive and memorable dining experience in Davis. When there is a fun activity and reason to dine, our Downtown can attract a higher rate of tourism.

Plant-based foods are good for us and our planet

The COOL Cuisine Burger Battle served as an engaging collective action moving us closer to meeting City of Davis’ climate action goals. Together diners prevented 14 metric tonnes of greenhouse gas (GHG) emissions and saved 3 million gallons of water! These planet-friendly burgers were a way to entice residents to sample foods with lower environmental impact. The production of beef burgers is responsible for a significant amount of greenhouse gas emissions, and per calorie and per protein content are significantly more intensive for water, land use, and other resources than their plant-based alternatives. 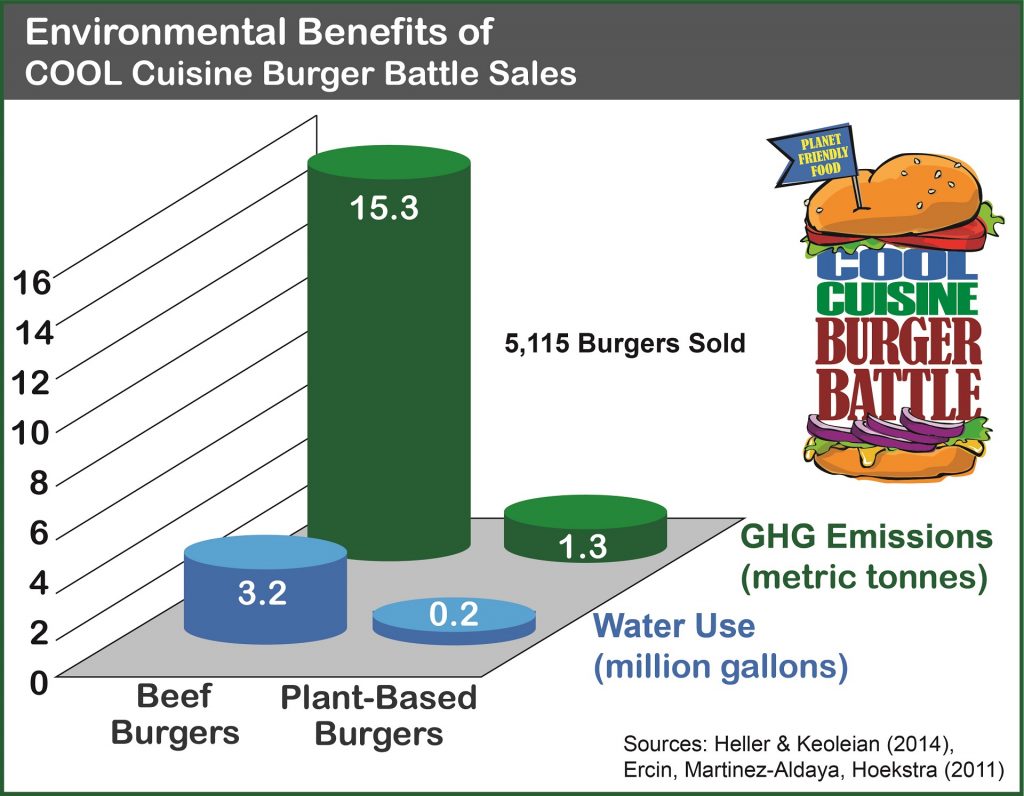 COOL Cuisine is a coalition of individuals and organizations seeking more plant-based, planet-friendly, and health conscious dining and shopping options in Davis, California and the surrounding region through outreach, restaurant meetups, and special events. Our members vote with their wallets! COOL Cuisine is a Cool Davis partner.

For more information about last month’s Burger Battle, visit the Cool Davis news blog or COOLCuisine.net. To learn about future events, sign up at Meetup.com for COOL Cuisine.