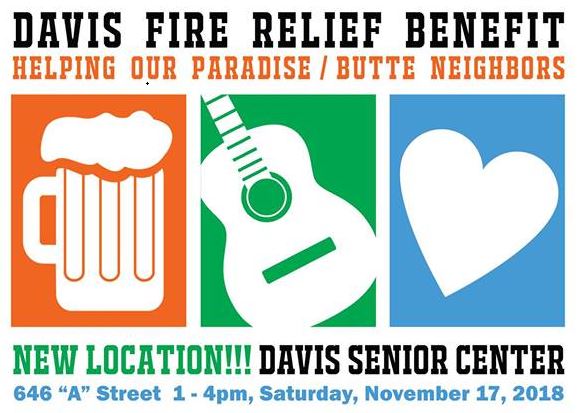 by Cool Davis Staff November 14, 2018
Climate Impacts, Community, Events
NOTE: NEW LOCATION — INDOORS DAVIS SENIOR CENTER
For the second year in a row, a group of local elected officials and community organizers in Davis and Yolo County will come together to generate support for those affected by the devastating fires that tore through Butte County this week.  Davis Media Access and KDRT are proud to provide organizational and broadcast support for this event.

Spearheaded by Davis City Councilmember Lucas Frerichs and Yolo County Supervisor Don Saylor, the group has organized the Davis/Yolo Fire Relief Benefit, to be held Saturday, Nov. 17, 2018, from 1 to 4 p.m. at the Davis Senior Center, 646 A Street in Davis. Mike Blanchard & The Californios will perform from 1-2:30 p.m., and Mumbo Gumbo from 3-4 p.m. Mumbo Gumbo drummer Rick Lotter’s brother, Scott Lotter, is a Davis native and current City Councilmember in Paradise.

The event also features a live broadcast by community radio station KDRT 95.7 FM/, beer by Sudwerk, and food trucks, with a portion of bar and food sales also benefiting the event.

“The devastation in Paradise is unimaginable –they’ve lost nearly the entire city,” Frerichs said. “A year ago we came together and raised $30,000 (in gift cards and monetary donations) in one afternoon for Sonoma/Napa fire victims. I’m confident Davis and Yolo will now help our neighbors to the north in their greatest time of need.”

Saylor added that, “Sadly, we’re getting good at this kind of event. Many of us have friends and family in the areas hit so hard by the current fires, so it’s personal. The people of Paradise are our neighbors, and they face utter devastation where their homes once were. This is what our communities in Yolo do when we learn of this kind of suffering.” 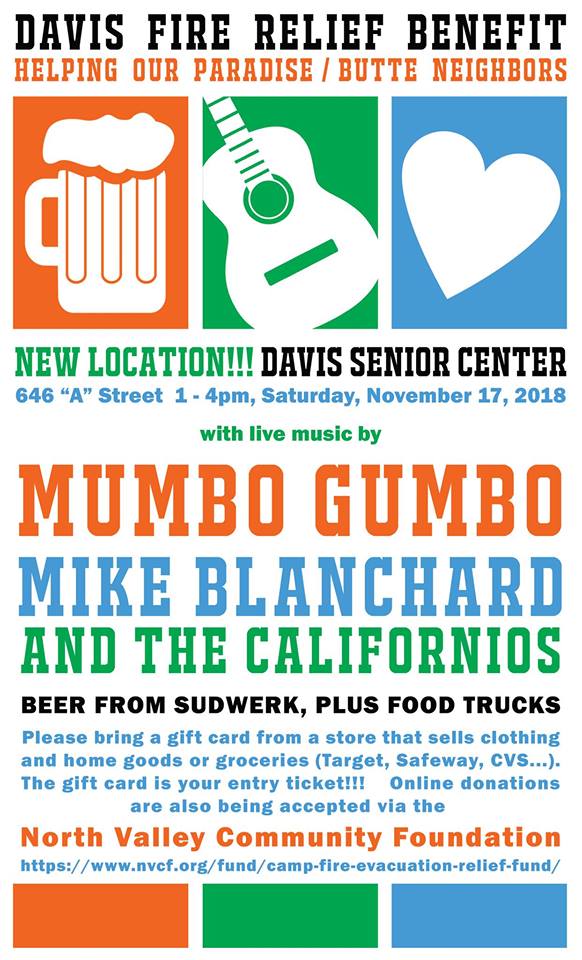 Entry to the event is a gift card of any amount to a store that sells groceries, housewares or clothing, and is redeemable in most areas of Northern California (Safeway, Target, CVS, for example). Working with elected officials in these counties, the cards will be delivered to fire victims most in need who have been evacuated, and in many cases have lost everything.

Elsewhere in Yolo County, Winters City Councilmember Jesse Loren said Winters will hold another event to assist Camp Fire evacuees. That event will take place at Berryessa Brewing on Sunday, Nov. 25 from 1-6 p.m., and features music by The Muddy Waders, and a special brew—“Thirst Responders”—on tap, all proceeds of which will be donated to the North Valley Community Foundation Fund (see below). Like the Davis events, gift cards to major stores will be collected at the door.

Donations can also be made—at both events or online—directly to fire victims through the community fund established by the North Valley Community Foundation, located in Chico. A full 100 percent of monies donated via this website will go directly to victims.