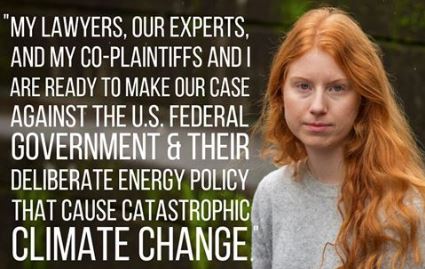 Editor’s Note: Please read the following update from Vic Barrett, 19 year-old university student from White Plains, New York, 1 of 21 young plaintiffs taking the United States government to court to fight for their constitutional right to a world that can host full, thriving, and healthy lives.

October 24, 2018 — Just last week, the Department of Justice petitioned the nation’s highest court in an attempt to stop our case from going to trial. The Supreme Court placed an administrative stay on the litigation effectively halting the lawsuit temporarily so that it could hear from our lawyers before issuing a decision. But despite the delay, we are confident that we will get our day in court. Over the last 3 years, we have overcome obstacle after obstacle in the fight to hold our federal government accountable for compromising the safety of our climate and our communities.

Will you show your support for this historic climate lawsuit by rallying outside courthouses nationwide to demand the climate solutions we urgently need? Sign up here to join the rally near Davis.

As youth, we have a vested interest in how climate change impacts humanity — because we’ll be on this planet longer than some of the people making the decisions jeopardizing our futures right now. We demand a just transition to 100% renewable energy for workers and communities. As plaintiffs, all 21 of us come from different walks of life: different regions, racial backgrounds, and economic classes. We stand united in our demand: a bold, science-based National Climate Recovery Plan to ensure that our generation and future generations can survive.   Yet the US government continues to violate our constitutional rights by subsidizing and propping up Big Oil – by expanding fossil fuel extraction, production and combustion  – and by continuing to perpetuate the global climate crisis.

Make a difference by joining a local rally for the Climate Trial of the Century on October 28th or 29th.

Since our government officials have actively contributed to the climate crisis for decades, we’re going to court to hold the government accountable for this crisis. We’re not afraid to do what it takes to challenge the halls of power to win the justice we need — and with so much at stake, we can’t afford to do anything less.

P.S. The Climate Trial of the Century will last for several weeks, maybe even months. Be sure to follow along behind the scenes of the trial on the new podcast No Ordinary Lawsuit, commissioned by the nonprofit Our Children’s Trust.

Judge Aiken’s decision, in large part, denied the motions brought by the Trump administration, but granted the motions in part by limiting the scope of the plaintiffs’ claims and dismissing the President from the case. As a result, the case will proceed to trial in exactly two weeks
on October 29, 2018.

In her decision, Judge Aiken held as follows:

● President Trump is dismissed as a defendant in the case without prejudice.

● Plaintiffs have viable legal claims under the Fifth Amendment and Public Trust Doctrine. Judge Aiken reiterated her order of November 10, 2016: “where a complaint alleges knowing governmental action is affirmatively and substantially damaging the climate system in a way that will cause human deaths, shorten human lifespans, result in widespread damage to property, threaten human food sources, and dramatically alter the planet’s ecosystem, it states a claim for a due process violation. To hold otherwise would be to say that the Constitution affords no
protection against a government’s knowing decision to poison the air its citizens breathe or the water its citizens drink.”

● “It is clearly within a district court’s authority to declare a violation of plaintiffs’
constitutional rights.”

● Plaintiffs have “proffered uncontradicted evidence showing that the government has
historically known about the dangers of greenhouse gases but has continued to take steps
promoting a fossil fuel based energy system, thus increasing greenhouse gas emissions.” The
Court also cited “the pattern of federally authorized emissions challenged by plaintiffs in this case
do make up a significant portion of global emissions.” The youth plaintiffs’ detailed evidence on
government knowledge will be presented at trial. 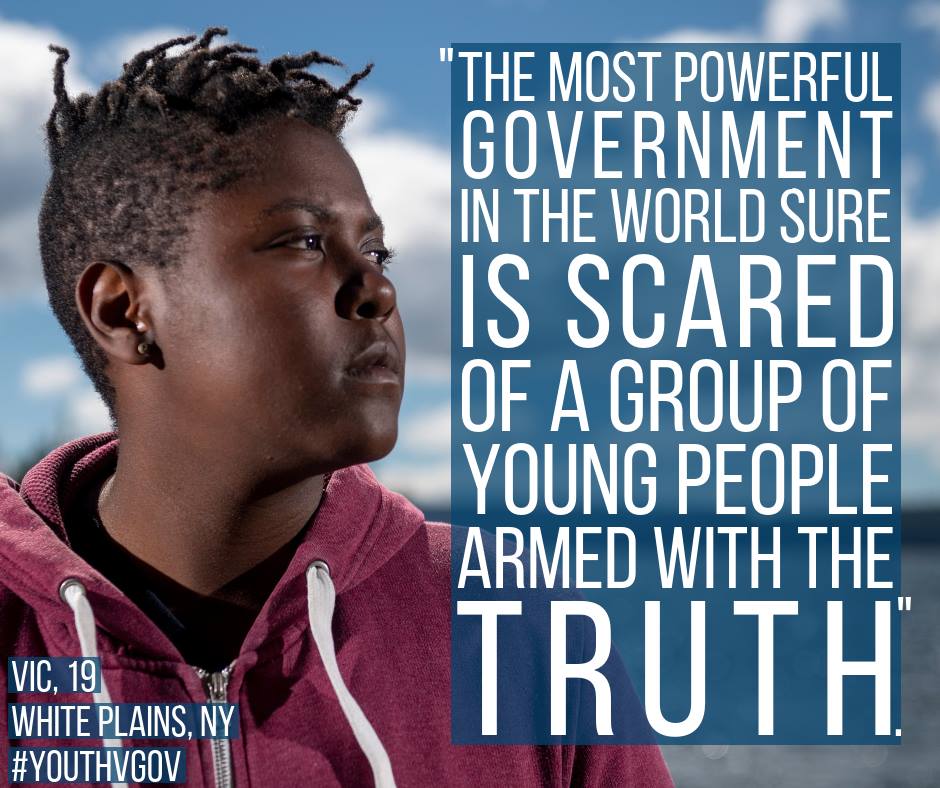 Visit Our Children’s Trust for more details from this October 15 press releases and other info.

The groundbreaking federal constitutional lawsuit, Juliana v U.S., supported by Our Children’s Trust, will begin on October 29th in Eugene, Oregon. Twenty-one youth will present evidence that the U.S. government substantially contributes to the climate crisis and that young people and future generations are disproportionately affected by it.

On October 29th, the first day of the Juliana trial, people will rally outside federal courthouses across the country in solidarity with the young plaintiffs. 350.org is inviting supporters to host local rallies on October 28 or 29 to stand in solidarity with the youth plaintiffs as their landmark trial begins, or to find a join a local rally to support the youth holding our government accountable.

These 21 youth, from many different backgrounds and communities, are uniting across race, class, and regions to fight for the planet and their lives. They are giving us all great hope. They are taking the Trump administration to court, demanding that our government address the climate crisis and protect our children and futures by implementing a science-based National Climate Recovery Plan.

These 21 young plaintiffs are united by the fierce determination and desire to shift our economy away from fossil fuels to a renewable energy world that puts our communities first, and the youth will present this evidence in court. 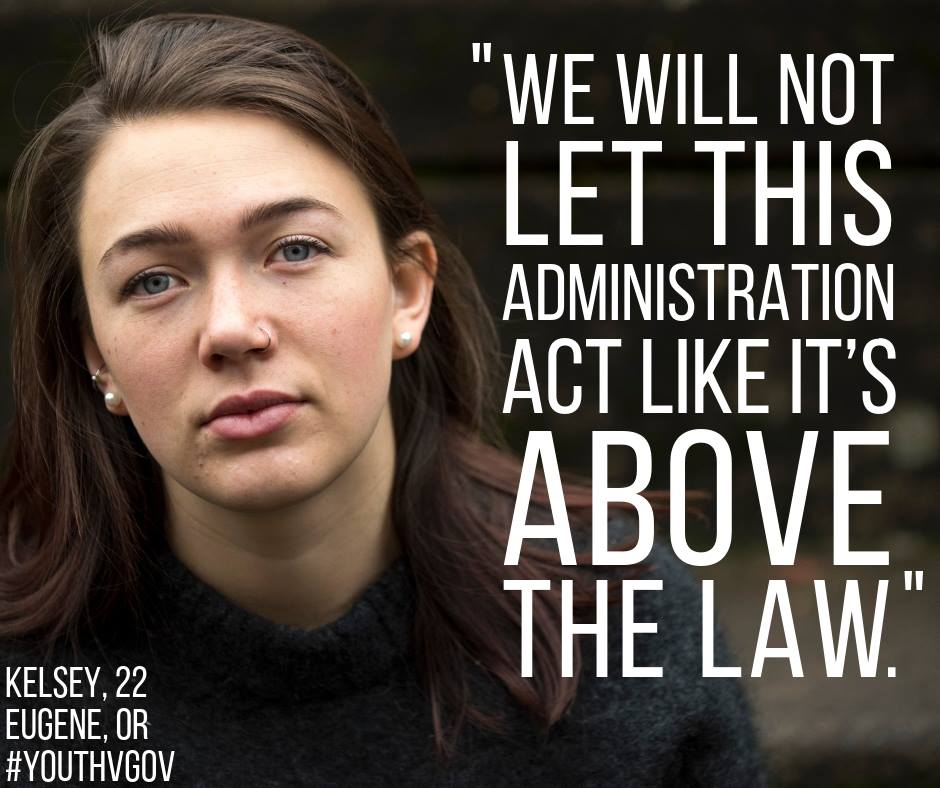 Reaction from Our Children’s Trust and the plaintiffs

“The District Court continues to provide well-reasoned decisions that narrow and appropriately
frame the heart of this case for trial. Today the parties are filing with the court their witness lists
and their pretrial memoranda. We are finalizing exhibits for trial and our experts and plaintiffs
have booked their tickets to Oregon. We are ready to bring all of the facts forward and prove
these youths’ case once and for all.”

“Judge Aiken’s blockbuster decision lays out in extremely precise detail the factual and legal
issues in our case which remain to be resolved at trial. These extensive issues include injury in
fact and causation. Judge Aiken rightly rejected the government’s motion for Summary Judgment
because the factual record in this case still requires extensive development at trial before she or
any higher court can reach a final decision. Having contributed extensive personal testimony and
research to help develop our case’s factual record over the past several years, I am confident that
our arguments on the remaining disputed issues will ultimately prevail in court. We still need a
full and fair trial to prove our case. October 29, here we come!”

“With Judge Ann Aiken’s most recent decision, my fellow plaintiffs and I have our eyes set on
one thing: our trial date. Although President Trump is no longer a defendant, we are confident we
can get proper relief with the named agencies that remain as defendants. The key components of
our case remain, and have withstood the plethora of attempts to dismiss, appeal, and stay our case
over the past three years. We – my lawyers, our experts, and my co-plaintiffs and I – are ready to
make our case against the U.S. federal government and their deliberate energy policy that cause
catastrophic climate change.”

Nathan Baring, 18-year-old plaintiff from Fairbanks, Alaska said:
“This ruling from Judge Aiken is an affirmation of the necessity that we stay on track with the
timeline that we are working with. She realizes the urgency of the pressing timeline and we are
excited to finally get into the courtroom for trial on October 29.”

Philip Gregory, of Gregory Law Group and co-counsel for the Youth Plaintiffs, commented:
“In her reasoned order, Judge Aiken dismissed both the President without prejudice and our claim
under the Ninth Amendment. The Court also dismissed one part of our equal protection claim
ruling that young people and future generations are not a suspect class. In all other respects,
Judge Aiken denied the motions brought by the federal government. The case is now fully
positioned to commence trial on October 29 and our Youth Plaintiffs look forward to presenting
the science to the Court.”

Juliana v. United States is not about the government’s failure to act on climate. Instead, these young plaintiffs between the ages of 11 and 22, assert that the U.S. government, through its affirmative actions in creating a national energy system that causes climate change, is depriving them of their constitutional rights to life, liberty, and property, and has failed to protect essential public trust resources. The case is one of many related legal actions brought by youth in several states and countries, all supported by Our Children’s Trust, and all seeking science-based action by governments to stabilize the climate system. Counsel for Plaintif s are Julia Olson, Esq. of Eugene, OR, Philip L. Gregory, Esq. of Gregory Law Group of Redwood City, CA, and Andrea Rodgers, Esq. of Seattle, WA. 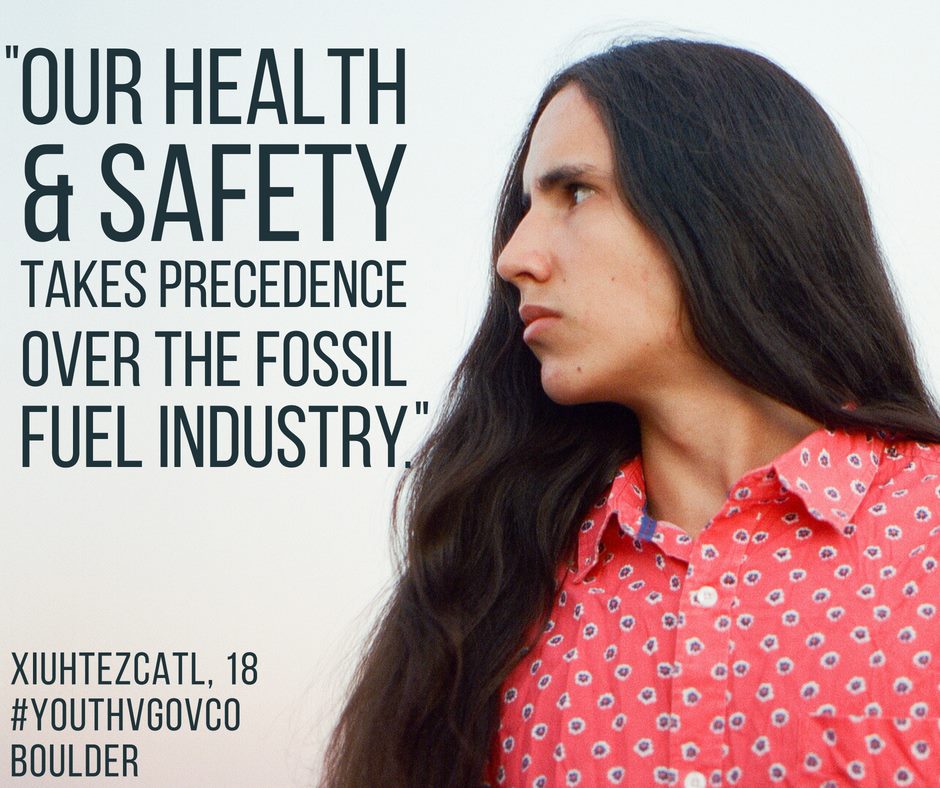 Our Children’s Trust is a nonprofit organization, leading a coordinated global human rights and environmental justice campaign to implement enforceable science-based Climate Recovery Plans that will return atmospheric carbon dioxide concentrations to below 350 ppm by the year 2100. We elevate the voice of youth, those with most to lose in the climate crisis, to secure the legal right to a healthy atmosphere and stable climate on behalf of all present and future generations. www.ourchildrenstrust.org/