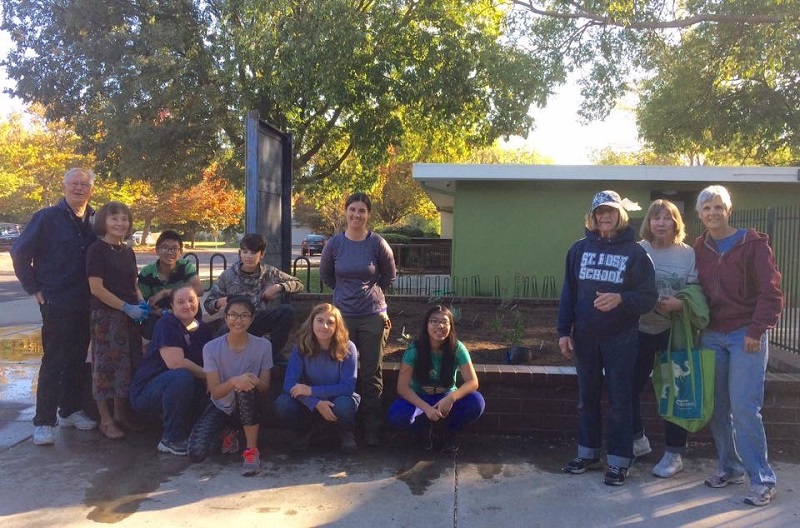 The St. James Environmental Justice Group is small, and at first glance, quietly unassuming. But just ask them about what concerns them, what they have accomplished, and what they have in mind next, and their passion pours out. They are an energetic, committed group.  As one member put it, they are small but feisty!

Their mission is to work diligently to address climate change and environmental justice issues in the spirit of Catholic Social Teaching, inspired most recently by Pope Francis’s new encyclical released in 2015.  They focus their work within the parish, locally, and in a larger context through education, reflection, advocacy, prayer, and direct action.

The group began meeting in 2015 to study Pope Francis’s encyclical titled “Laudato Sí: On Care For Our Common Home.” They met regularly and explored the text thoughtfully for nine months, considering how the passages applied to their own immediate lives as well as the implications for our imperiled planet. They embraced the Pope’s teachings that we must care for the earth lest we bring harm to those who are least responsible and often also least able to recover from climate disasters.

Over time the group defined its goals as follows (in italics):

For this, the group maintains the “green boards” in the vestibules of St. James Church, posting photos and articles related to care for creation and climate change. Opportunities for action are highlighted, and “take action” fliers are often available. Each week, an Environmental Justice Message appears in the bulletin, with a quote from Laudato Sí and a suggestion for reflection or action.

To work with other engaged persons in the community through such groups as the local Yolo Interfaith Alliance for Climate Justice;

To promote awareness of Catholic environmental efforts in the United States and abroad, through consultation with such organizations as the Franciscan Action Network, Catholic Climate Covenant, and Global Catholic Climate Movement;

The group reads alerts from these organizations and acts on them when appropriate.

To provide support to individuals and communities directly affected by climate and justice issues;

The group pays attention to justice issues in places like Puerto Rico and have participated in rallies against the Dakota Access Pipeline with the Standing Rock Sioux.

To participate in action and advocacy on behalf of climate and environmental justice in our community and beyond;

They are always on the lookout for opportunities to show up and make a difference with their advocacy.

To continue to pray and reflect together on Catholic teaching, particularly Laudato Sí.

At each monthly meeting the group prays for the health of our Earth and reflects on lost opportunities and successes in curbing climate change in the month before.

The group is especially proud of their Laudato Sí Celebration held July 30, 2017.  They invited other faith community members and the public to share readings from environmental statements by various faith groups. They composed a choral reading of passages from Laudato Sí, Saint Francis, and their own words, closing with Thomas Merton’s “The Sowing of Meanings.” Father Joshua Sia led everyone outside to bless the cleared garden (which they planted later in the cooler fall with drought-tolerant plants).  The event’s 60 guests enjoyed refreshments,  watched Leonardo diCaprio’s “Before the Flood,” a thought-provoking film on climate change, and were careful to leave no waste behind. A splendid celebration indeed.  The group has vowed to maintain the garden they planted.

The group plans to continue their work with a climate film series beginning with “Dear Governor Brown,” a film on fracking. The films will be promoted through the Yolo Interfaith Alliance for Climate Justice, Cool Davis, the Davis Enterprise, and other avenues, and all will be welcome.

The St. James Environmental Justice Group is ready to respond as they continue to watch events in our country and in the environment that propel them into action. Cool Davis welcomes you as our newest partner!