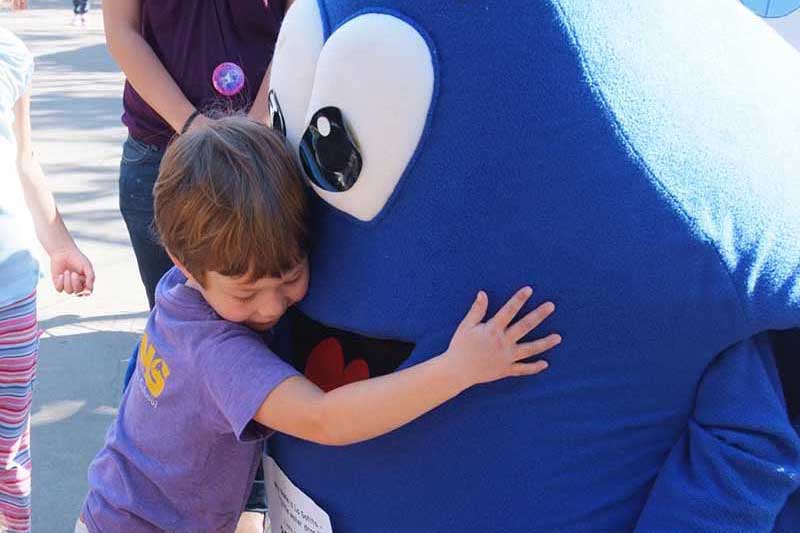 You may have gotten a hug from La Gotita at a Cool Davis festival or seen her on Cool Davis social media channels, but did you know that La Gotita has helped change the world by lobbying for the human right to water in both North and South America?

Starting in Tumbes, the government decertified the Federation of Water and Sanitation Workers of Peru (FENTAP) that represented public workers. The new water utilities fired FENTAP members and organizers and hired unskilled laborers to replace workers who had served their communities for decades.

In response, FENTAP organized a grassroots campaign made up of “Agua y Vida” (Water and Life) coalitions, which included environmental groups, union members, consumers, and faith communities. Together they advocated that Peru recognize water as a human right through law. To help take their campaign to the people, FENTAP created La Gotita costumes.

Meanwhile, the Boston-based Unitarian Universalist Service Committee (UUSC) provided FENTAP with funding to hold campaign workshops to educate the people and local governments about the human right to water.

FENTAP’s work paid off when in 2008, a judge agreed that a contract to privatize the water of the Tumbes area was illegal. And in a victory for labor rights, Tumbes recertified the local FENTAP union.

A grateful FENTAP shipped La Gotita to UUSC headquarters in Boston in appreciation.

Meanwhile in 2004, UU Minister, the Reverend Lindi Ramsden, founded the California UU Legislative Ministry (UULM) to encourage UU Churches to promote social change through civic engagement. As a result, California UUs began to lobby consistently for issues such as marriage equality, the responsible use of water, and health care.

With the onset of a major drought in 2007 in California, social services agencies on the west side of the San Joaquin Valley, among others, experienced dramatic increases in requests for assistance. Wells and jobs were drying up. Many small towns had no water and needed help.

The California UULM and local UU congregations reached out to the mostly Hispanic communities in the San Joaquin Valley to aid their lobbying efforts in Sacramento to obtain on-going access to water and other assistance. The Boston UU Office sent La Gotita to Sacramento to help.

By June 2009, the governor issued Executive Order S-11-09, calling for the provision of temporary supplemental assistance to local governments and non-profit organizations that provide food and other aid in recognition of the continuing need for drought-related social services assistance, especially in the San Joaquin Valley.

Meanwhile, in 2008, Ecuador and Bolivia wrote the human right to water into their constitutions, as did Kenya in 2010. In 2010, the Human Right to Water and Sanitation (HRWS) was recognized as a human right by the United Nations (UN) General Assembly. In 2012, both Peru and Mexico adopted a human-right-to-water policy.

Also in 2012, California became the first U.S. state in our nation to legislatively recognize the human right to water. Our state was lauded around the world for this bold move.

The state now hosts a Human Right to Water Portal.

When Cool Davis formed and began its own work to help our community implement its Climate Action and Adaptation Plan, which includes water conservation, Judy Moores borrowed the original La Gotita as a model for a second La Gotita she created especially for Davis.

The original La Gotita is back at work in Boston, but our very own La Gotita shows up at Cool Davis festivals, the Davis Farmer’s Market, and UC Davis Picnic Day parades. And she has lobbied in Sacramento, just like the original.

Many volunteers have taken on the mantle, but special standouts include Eva Dopico and Jaxon Kamisky.

Water Wise Davis has joined the effort to prioritize water as a resource as a working group of Cool Davis starting with the Greywater Showcase event this past month.

Our La Gotita gives Cool Davis and the City of Davis a mascot that represents the essential need to use water wisely wherever we live.

She’s big, soft, and blue, and there is no doubt she’s a huggable magnet wherever she goes. Children and folks of all ages always want that irresistible selfie because we all know Water Is Life.

“One drop of water is tiny, but lots together make an ocean. What one person does is insignificant, but when we all work together we can change the world,” says Cool Davis mascot La Gotita, affectionately known as “Little Raindrop.”

The Right to Water and Dissent in Peru

Whereas, the United States, with 4.5% of the world’s population is responsible for producing 30% of greenhouse gases; and

Whereas, even though China now produces as much CO2 annually, the US still produces many times more carbon per person than China, India, and most other countries; and

Whereas, in 2005, then Mayor Ruth Uy Asmundson, on behalf of the City of Davis signed the U.S. Mayors agreement on climate control in support of the Kyoto Protocols; and

Whereas, in 2006, the California Legislature reached an agreement with Governor Arnold Schwarzenegger to reduce the state’s greenhouse-gas emissions, which rank at 12th-largest in the world, by 25 percent by the year 2020; and

Whereas, the current level of carbon dioxide in the atmosphere is at 389 parts per million; and

Whereas, 350ppm is the number that leading scientists say is the safe upper limit for carbon dioxide; and

Whereas, humanity needs to get back to 350ppm as soon as possible to avoid runaway climate change and irreversible catastrophic effects; and

Whereas, the City of Davis is making major efforts to reduce green house gas emissions, and is inviting all households to go on a Low Carbon Diet and reduce their carbon footprint by 15% by 2012; and

Whereas, in December 2009, world leaders will meet in Copenhagen, Denmark to craft a new global treaty on cutting emissions; and

Whereas, October 24, 2009 has been designated International Climate Action Day; and

Whereas, under the auspices of the www.350.org effort about 1600 actions have been scheduled in 125 countries on Climate Action Day to demonstrate global grassroots support for an international treaty that meets the severity of the climate crisis; and

Whereas, to tackle climate change, we need to move quickly, and in unison. While most environmental problems are beyond the scope of individuals, many may be mitigated when each does part of the work; and

Whereas, climate change has social justice and peace implications, which threaten families everywhere with catastrophic weather events and flooding, especially in low-lying areas, such as those in Bangladesh, Louisiana, Netherlands, and Egypt; and

Whereas, we all need to commit to personal lifestyle changes in order to leave the world a better place for generations to come, and it is important to make these changes with celebration and joy.

NOW, THEREFORE, I Ruth Uy Asmundson, Mayor of the City of Davis, on behalf of the Davis City Council do hereby proclaim Saturday, October 24, 2009 as 350 Davis: Climate Action Day, and invite the residents of Davis to participate in the Climate Action Day bike parade and other activities; and

BE IT FURTHER PROCLAIMED, that all citizens and households are encouraged to reduce their carbon emissions, and are invited to celebrate our collective efforts to reduce carbon emissions for the good of planet Earth: its human population, its plants and its animals, too.