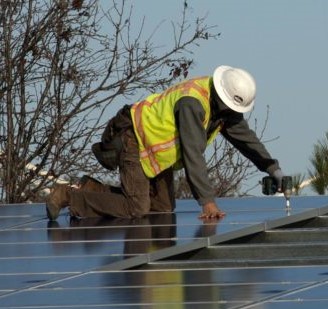 by Leslie Crenna May 3, 2017
City of Davis, Energy, Inspiration, Solar

SolSmart, a program funded by he U.S. Department of Energy SunShot Initiative, has recognized Davis with a Gold Award. Davis will be identified as a solar energy national leader in advancing solar energy at the American Planners Association’s annual conference May 6-9 in New York City.

As a SolSmart Gold designee, Davis is receiving recognition for adopting programs and practices that make it faster, easier and cheaper to go solar. A SolSmart designation is a signal that the community is “open for solar business,” helping to attract solar industry investment and generate economic development and local jobs.

“In order to sever our reliance on greenhouse gas-producing fossil fuels, we need to build a deeper relationship with the sun,” he continued. “In 2010, we set a goal to produce 5 percent of the peak electricity used in Davis — 2.6 megawatts — from local renewable energy sources by 2015. We exceeded that goal by approximately 10 times.”

Cool Davis works with the City to reach community goals

New “Double Up on Solar” goals established by Davis City Council last year aim to double the number of single-family household rooftop systems to approximately 4,500 and double the total residential power production capacity by installing an additional 21 megawatts by the end of 2020. As a community, Davis reached its annual goal of 500 solar-system permits in 2016 and hopes to reach another 550 in 2017.

Chris Granger, executive director of Cool Davis, said her organization has been working with the city since 2010 to reduce the community’s carbon footprint. Local energy experts and business also contributed time and expertise to the “Double-Up” campaign.

“Davis businesses and residents have really stepped up!” Granger said. “Hopefully, this award can generate even more community excitement about rooftop solar energy.”

To achieve SolSmart designation, cities and counties take steps to reduce solar “soft costs,” which are non-hardware costs that can increase the time and money it takes to install a solar energy system. Examples of soft costs include planning and zoning, permitting, financing, customer acquisition and installation labor.

Soft costs represent roughly two-thirds of the total price of an installed residential system. Reducing these costs leads to savings that are passed on to consumers.

The SolSmart designation team evaluates communities and awards them points based on the actions they take to reduce soft costs and other barriers to solar, leading to gold, silver or bronze designation. Launched last April, SolSmart aims to designate 300 communities during its three-year, federally funded program.

For more information about the Double Up on Solar campaign, check out our solar page.