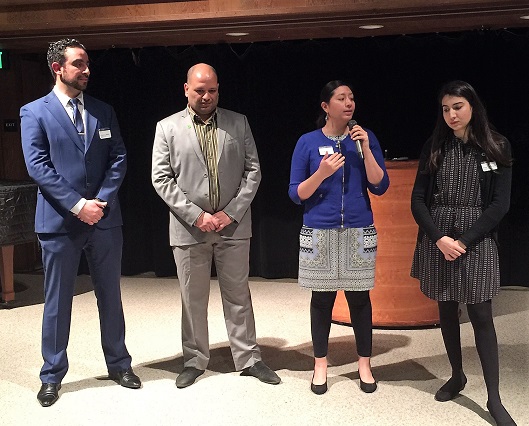 Four UC Davis Humphrey Fellows from Mexico, Morocco, Tunisia, and Pakistan came to study here in their areas of expertise.  What they learn and the connections they make will benefit their countries when they return.  The Yolo Interfaith  Alliance for Climate Justice invited them to speak on the impacts of climate change in their respective countries, and what solutions they hope will turn the tide.

Their comments and the following discussion with the audience is videotaped here.

Just four days after their March 24th presentation at the Unitarian Universalist Church, the Sacramento Bee published a pertinent story from the New York Times by Jeffrey Gettleman, a correspondent in Baidoa, Somalia.  He described how drought and war have raised the threat of immediate famine in four countries of East Africa:  Somalia, Yemen, Nigeria, and South Sudan.  Gettleman warned of the sweltering days and poor rains the last two years that have left six additional countries (Burundi, Kenya, Rwanda, Uganda, Ethiopia and Tanzania) also parched and on the edge of famine.

Gettleman places the cause at our doorstep.  “Scientists have been saying for years that climate change will increase the frequency of droughts.   The hardest-hit countries, though, produce almost none of the carbon emissions that are widely believed to cause climate change.  South Sudan and Somalia, for instance, have relatively few vehicles and almost no industry.  But their fields are drying up and their pastureland is vanishing, scientists say, partly because of the global effects of pollution.  People in these countries suffer from other people’s driving, other people’s manufacturing and other people’s attachment to things like flat-screen TVs and iPads that most Somalis and South Sudanese will touch only in their dreams.”

Our complicity cannot be denied.  Our high carbon lifestyles come with a heart-breaking price that people half way around the world must pay.  In addition to our individual efforts to conserve, the transition to clean energy takes on a new urgency.  This is not the time to renege on the Clean Power Plan or reduce the rules put in place to meet our commitment to the Paris Accord.  Our efforts literally translate into human lives saved.  Another story by Robyn Dixon of the LA Times raised more ethical questions about the situation.

Fortunately, these four Humphrey Fellows come from countries that are not desperate at the moment.  Eight of the eleven Davis Humphrey Fellows just attended Al Gore’s Climate Reality Leadership Corps in Denver to learn about climate change and how to speak about it convincingly in public.  The project is based on the premise that the best way to communicate the urgency of climate action is directly, person to person.  They are now climate ambassadors both at home and abroad.  950 people attended this recent training, with Gore himself participating throughout.  Since he began his movement in 2001, Gore has trained over 6,000 climate leaders.  His Climate Reality Project encompasses branches in Africa, Australia, Brazil, Canada, Europe, India, Indonesia and Mexico.  For more information on the Climate Reality Project, read below.

Humphrey Fellow Itzel Morales lives on the largest and most populated island along the Caribbean coast of the Yucatan Peninsula, Ciudad del Carmen.  She recalls the summers grew hotter and more uncomfortable in her teen years, until opening the windows and using a fan was no longer enough to cool them at night.

“Our homes were not air conditioned, and I felt afraid,” she told the audience at the church.  “Hurricanes were fewer, but rainfall was heavier. Why was the weather changing?”

Itzel decided then to study science and find out.

She earned degrees in biochemical engineering and climate change.  Now her island faces a future of rising sea level and coastal erosion.  Instead of just dengue fever, the increased temperature allows mosquitoes to breed zika virus and another serious virus.  A recent drought has cost the Yucatan 12% of its tropical forests to fires.

She works on solutions in waste management, natural resources conservation, and community empowerment with a goal of reducing greenhouse gas (ghg) emissions 25% by 2030.  Since her four rounds of Reality Climate leadership Training, she has spoken to over 4,000 people to raise awareness and promote conservation.

Adanane Labbaci is the Chief of GIS and the Remote Sensing Bureau of the Desertification Bureau in Morocco.  His life has been devoted to combating desertifi-cation and the loss of trees, because they assure the cities a watershed which is essential for their survival.  He began by reminding us, “There is no plan B because there is no Planet B.”

With increasing temperatures, he notes the increasing desertification, and the necessity for trees to survive.  In Morocco, the rain levels have dropped by 50% while temperatures, wildfires, and erosion have increased.  The only responses are to adapt and protect what remains, to separate economic growth from ghg emissions (i.e. separate growth from the use of fossil fuels) – for example by going solar, and to make plans for climate refugees already coming into the country.

Tarek Rabai is a marketing manager for date crop which represents 2% of the GDP of his country, Tunisia.  Surprisingly, he admitted to being a climate denier until the last year when he evaluated the data more carefully.  Especially after attending Climate Reality Leadership training, he is committed to responding to the challenge that he now recognizes is threatening his country, including the date crop!

Tunisia is 64,00 square miles and on average people earn $5,000/year.  He documented some of the obvious, already visible consequences of climate change including:

In Tarek’s opinion, Tunisia needs major efforts right away in these areas:

Tarek has come a long way from his initial climate denial position to a recognition of the difficult changes ahead for his country.

Aalia is the program officer for an institute of rural management in Pakistan, and she chose to stay in Davis to develop strategies for the inclusion and capacity-building of rural women in agri-based enterprise development.  She is paying attention to post-harvest management and extension services to take back innovative and cost-effective models for her region in the far north.

She said, “If it doesn’t happen to you, you just don’t know about it,” when she took the Climate Reality Leadership training and learned just how vulnerable her country is.

In fact, due to its location and geography, Pakistan is in the top 7 countries in the world to experience severe impacts from climate change ranging from coastal flooding to glacial floods to drought and heat waves that whither crops.  61% of the 189 million people are still rural.  Only 3% is still forested but 21% is in agriculture.  Pakistan emits only 8% ghg emissions (mostly from energy and agriculture), but it is the 7th most vulnerable country in terms of climate change impacts.

Precipitation is increasing, but unevenly.  Glaciers are all melting and causing floods in the north while the sea level is rising in the south, and more extreme weather strikes anywhere any time.  Already crop yields have dropped.  In 2010, 20 million people were displaced from coastal floods.

The government has joined the non-profit Project Lead Pakistan which is trying to build up resilience through adaptation.  Advisors teach the farmers ways to control the water flow and manage the land so they can harvest crops even as the climate changes.

Aalia says, “I’ve learned a lot here, in Davis.  In Northern Pakistan where I live, we want to drive just to get something at the store; we don’t take our bikes.  I see here we take our own bags to the store, and many people ride a bicycle instead of drive.  It’s just a little bit to do, but I think it can make a big difference.”

The program takes great leaders and makes them exceptional, training them in climate science, communication, and organizing in order to better tell the story of climate change and inspire communities everywhere to take action.  The result is a dynamic group of world-changers shaping the conversation on climate in forums from family dinners to international summits and building a 21st century movement for solutions.

It’s time to stand up for what matters.

But clean energy and science will.

With renewable technologies like wind and solar in our hands today, we can solve the climate crisis. But only if our leaders insist on truth, accept reality, and listen to science.

Together, we’ll make them.

We need to act on Climate Change

The overwhelming majority of the world’s climate scientists agree:  man-made change is a reality.  Unless we act now, temperatures will rise beyond our control.

2. There are real dangers.

We’re looking at a future of seas climbing up our shores; devastating floods, droughts, and storms becoming more frequent facts of life; seasons changing beyond recognition; and dangerous consequences for our health we’re only beginning to understand.

We have a moral responsibility to each other and to our children to address this crisis.  This is our one beautiful and deeply precious home.

We can solve Climate change.

We know how to stop climate change and we have the tools to do it.  We start by ditching the dirty fossil fuels devastating our climate and our health and switching to clean, reliable, and affordable renewable energies like wind and solar.

3. We’re doing it together.

We’re bringing together people from all walks of life and corners of the earth to support a strong climate agreement in Paris that puts us on the path to zero carbon emissions and the healthy and prosperous future we want.  When the world speaks with one voice, our leaders have to listen.

Links to related articles on climate change and recent or upcoming local events:

March for Climate, Jobs, and Justice on April 29