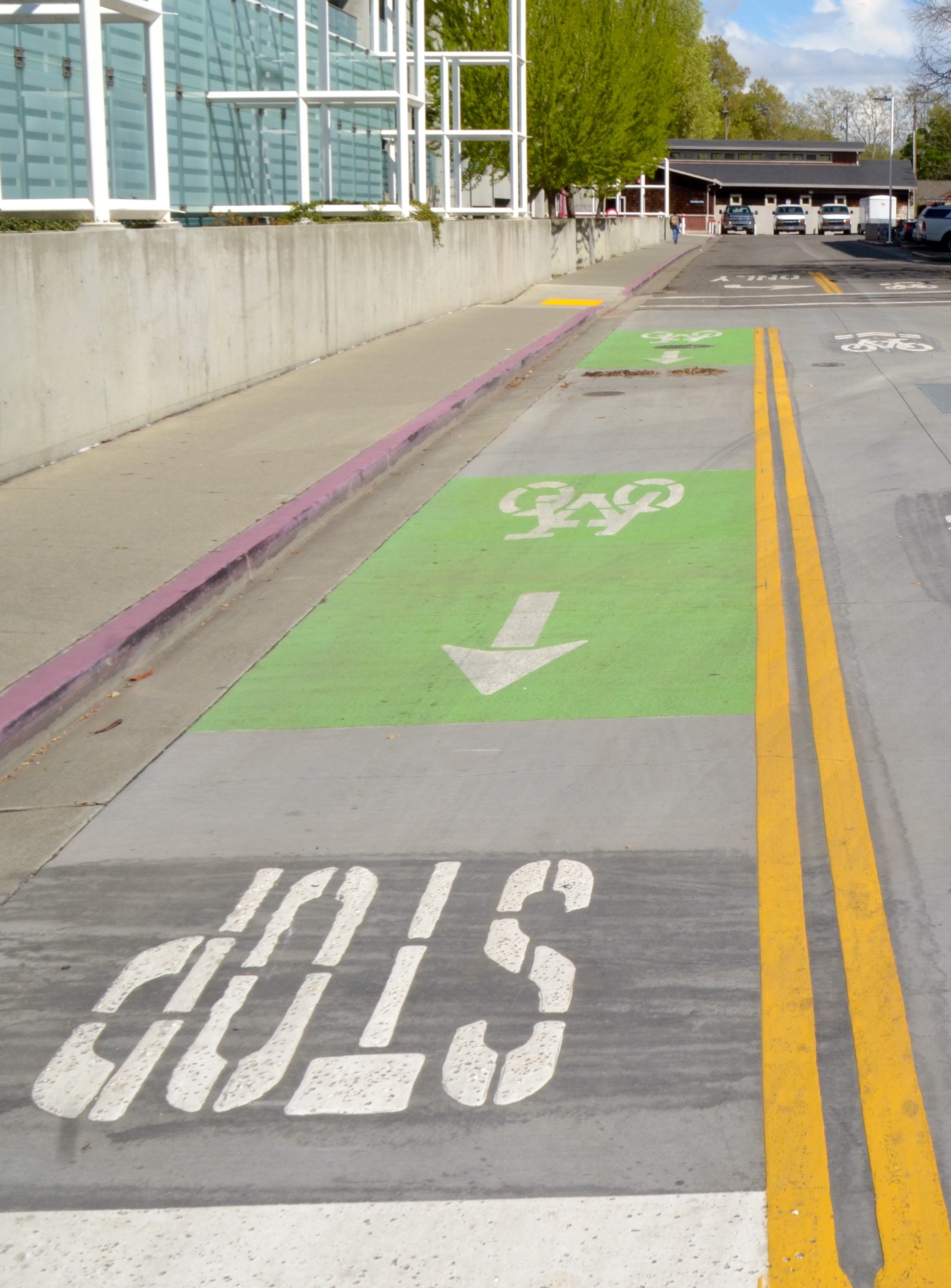 The Davis Centennial is not our only significant anniversary in 2017: Davis’s dedicated, on-street bike lanes turn 50 this year!

The four dedicated bike lanes Davis established in 1967 were the first in the nation. It was a significant accomplishment won with a lot of grass-roots activism, creative problem solving, and serious politicking.

Imagine what travel in Davis would be like without the current system of bike lanes and paths. Bike riding would be less enjoyable, less efficient, and more dangerous. Traffic would be worse, parking even more difficult, and car caused pollution much higher. The quality of life in our town would have been dramatically diminished.

Back in 1967, these negative outcomes were not necessarily obvious in our relatively quiet university town. But a small group of visionaries could see that the benefits would only increase far into the future.

The story of Davis bike lanes starts in the Netherlands. Davis residents Donna and Dale Lott and Frank and Eve Child returned from sabbaticals in 1963 impressed by the number of bike lanes there. They began a vigorous campaign to establish the same type of system in Davis. They formed the Citizens Bicycle Study Group (CBSG) that proposed a series of dedicated bike lanes to the city but the plan was rejected by city planners and the city council.

Bike lane advocates decided to take the issue to the voters. The group strongly supported two pro-bike lane council candidates, Maynard Skinner and Norm Woodbury, who were swept into office with 60 percent plus majorities. After taking office in 1966, the two joined with Mayor Kent Gill to approve four dedicated street bike lanes. But even then, the path forward was not assured.

At the time, California law did not allow for bike lanes on city streets. That problem was solved with the introduction and passage of Vehicle Code section 21207 in 1967 establishing standards and rules for bike lanes. Much of the credit goes to the behind the scenes work of Davis city officials.

With this legal hurdle behind them, the city began by lining two on-street bike lanes: one running along Third Street from campus to downtown and another on Sycamore Lane between Russell and 8th Streets. A short while later, lanes on B street and Villanova Drive were established.

There were still major concerns about how to create a safe lane for bike riders without impeding traffic or impairing parking. The earliest attempt used low cement dividers that proved impractical. Placing parking spaces between the bike lanes and traffic flow was another short-lived experiment. Through it all, city engineers persisted and finally came up with a design approach that satisfied the primary concerns of traffic flow and safety. In the end, a simple five-foot-wide lane between on-street parking and the automobile traffic won out.

In 1969, another innovation was introduced. A separate bike path was built running through a long linear green belt in a new North Davis subdivision. This provided bike riders with complete freedom from sharing the road with cars. Fast forward, Davis now has over 50 miles of bike paths in its interconnected “greenway system,” allowing bike riders to travel through much of Davis to the campus or the edge of downtown without ever encountering a car.

By 1972, bike routes had been established on almost all major roads from Pole Line in the East to Sycamore in the West and First St., north to Covell. Even more important, the City had established a uniform set of standard for the siting and construction of bike lanes and paths that would be applied in all new developments going forward. The City’s criteria were later adopted by the State of California and dozens of jurisdictions across the Country.

Today a full 20 percent of local trips are taken by bike in Davis. Without the benefit of bike lanes, that number would surely be dramatically lower. It’s worth taking a moment to reflect and appreciate the work of those pioneering residents 50 years ago.

Join The Bike Campaign and Bike Garage at 2 p.m. Saturday, Oct. 23, in the Bike Garage, 1500 Cannery Ave., behind the barn in The Cannery, for a hands-on “Bike Maintenance Workshop.” ... See MoreSee Less

(CNN) A series of potent Pacific storms are directed at Northern California this week ... the storms could lead to flash floods and dangerous debris flows in a wide swath of the region already devastated by recent wildfires. https://www.cnn.com/2021/10/20/weather/atmospheric-river-forecast-california-debris-flow/index.html

Cool Davis is currently seeking candidates with a background in community organizing to work with households at neighborhood level, including homeowners and rental households in single and multi-family homes. https://www.cooldavis.org/2021/09/15/want-to-take-on-climate-change-cool-davis-is-hiring/

UCCE Master Gardeners of Yolo Co. are recruiting for their 2022 training class. If you are interested in applying, please email or call Jennifer Baumbach, Program Coordinator at http://jmbaumbachATucanr.edu for an application. Deadline is this Friday, October 8 by 5 pm.

Our partner @thebikecampaign will have a "Chat" trishaw for the new @cyclingwithoutage chapter in #daviscalifornia on hand this Sunday at Central Park. They're recruiting for pilots! Come see what it's all about! @CityofDavis @bikedavis @ucdaviscycling

October 3 from 11am to 2 pm Davis Central Park Pavilion