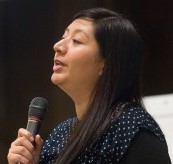 Davis residents push for enviro protections in a Trump administration

Crossposted from the Davis Enterprise, January 11, 2017

It’s been nine weeks since the presidential election, and Davisites are still riding a wave of activist momentum that has attracted hundreds to a call for action.

On Sunday, more than 150 residents gathered to discuss how to protect environmental gains from a feared assault by Donald Trump’s administration, filling the wooden pews at Davis Community Church.

Words like “unsettled,” “unsafe” and “disoriented” hung heavy in the air.

The meeting is the most recent in a series of gatherings hosted by the Davis Phoenix Coalition since Election Day last November. Similar meetings have seen local residents arrive by the hundreds to air concerns and learn about Davis’ sanctuary-city status.

The topics in the spotlight most recently, however, were climate change and environmental justice.

“It doesn’t matter if you are rich or poor … (climate change) is a global challenge, which requires global solidarity,” said Itzel Morales, a Hubert H. Humphrey Fellow at UC Davis.

As one of the event’s speakers, Morales spelled out the all-too-familiar effects of climate change, from shifts in weather patterns in her hometown in Mexico, to growing incidences of forest fires and flooding seen across North America.

Morales urged locals to deepen their commitment to the environment, be it taking responsibility for each item they shop for or challenging climate change-deniers.

“The last thing is to not give up … we have to continue to protect the beautiful planet that our Earth is,” Morales said.

“We really have to change the way we are living on our planet or we will all die,” she said.

* Resistance, to be made stronger by working together;

* Reparations, to groups that have been marginalized in the past;

* Radical challenges, against corporations that value money over human rights; and,

* Resilience, toward challenges in the future

Those present then broke into discussion groups, hosted on the spot by attendees. Participants could choose from discussions addressing topics such as complicity, new ways to recycle, grassroots action and ways to shift diets for a sustainable future.

Participants debated what charities — whether large or local — to donate money to, and brainstormed ideas for resistance during Trump’s first 100 days in office.

“(Donating) has more power that you realize … when other people see what you’re doing and still living successfully,” said Chris Granger, executive director of Cool Davis, while leading a group on money matters.

Active discussions about grassroots actions also flourished, including upcoming local events. On March 4, locals will host a “Contra for a Cause” event that will feature a community contra dance to raise funds for Syrian refugees. Details are pending.

The event closed with remarks from the Rev. Chris Neufeld-Erdman of Davis Community Church, who offered a speech centered on hope and resilience.

“Even if we only move incrementally, we move forward,” the pastor said.

“Hope is an absolve to work for something because it is good, not because it may be successful.”