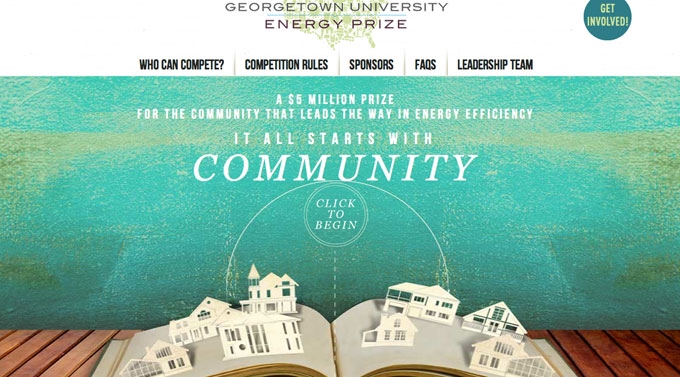 Davis in the running for $5 million energy efficiency prize

On January 14, 2015, Davis held a celebratory launch to mark its official advance to the semifinal round of the Georgetown University Energy Prize, a national competition that is challenging communities across the U.S. to rethink their energy use.

The Georgetown University Energy Prize challenges small to medium size towns, cities, and counties to rethink their energy use, and implement creative strategies to increase efficiency. To compete for the Prize, local governments, residents, utilities, and others will work together to demonstrate success in sustainably reducing energy consumption over a two-year period. The City of Davis, Davis Joint Unified School District and Cool Davis have partnered to ensure Davis’ success in this competition

The prize will help boost Cool Davis efforts to to engage 75% of Davis households in reducing their greenhouse gas emissions. Davis is one of nine cities in California in this friendly competition to improve energy efficiency for all. California cities include: Davis, Berkeley, Danville, Palo Alto, Claremont, Fremont, Sunnyvale, Redlands and Chula Vista.

“The competition looks truly like America,” said Dr. Francis Slakey, Founder and Executive Director of the Georgetown University Energy Prize, “not only do these communities come from across the map, they come from across the political spectrum, represent all socioeconomic strata, and include demographically diverse populations. Some are paying the highest prices for energy, some have the ambition to be carbon net-zero, but all communities share the goal of transforming America’s energy future.”

The Davis plan for winning the competition seeks to build on previous efforts that have won awards for our efforts on sustainability, in particular our achievement in being named the ‘Coolest City’ in Caliifornia in 2013 when Davis outscored seven other cities for our efforts to reduce greenhouse gas emissions. We will make the most of our community’s passion, creativity and academic expertise on energy issues to become a model for a low-carbon future.

“Davis is in an excellent position to win this challenge. We have made some great steps in recent years, but here is our chance to go the extra mile. Most importantly, winning is not just a chance to boost our pride in our local community, it is also an opportunity to demonstrate the kind of sustainable energy-efficient living we need in our planet.” stated Davis Mayor Dan Wolk.

“Mayor Dan Wolk, as well as mayors and executives across the county, have told us that this Prize gives them the momentum to accelerate their energy efficiency efforts,” said Dr. Slakey. Slakey continued, “These Semifinalist communities are leading the way for other small- and medium-size cities and counties to secure their energy efficient future.”

The competition began on January 1, 2015. Baseline energy usage was documented and will be compared over the two year period to monitor individual progress and at the end of the competition, the $5 million winner will be named.

In Davis, everyone is being encouraged to sign up to become a “Cool Home” which you can do on this website in order to get the latest advice and support on energy efficiency and to stay informed.

Chris Granger, Cool Davis Director, stated “To become the nation’s Coolest City will depend on every household in Davis doing their part. Please sign up to be a Cool Home today.”