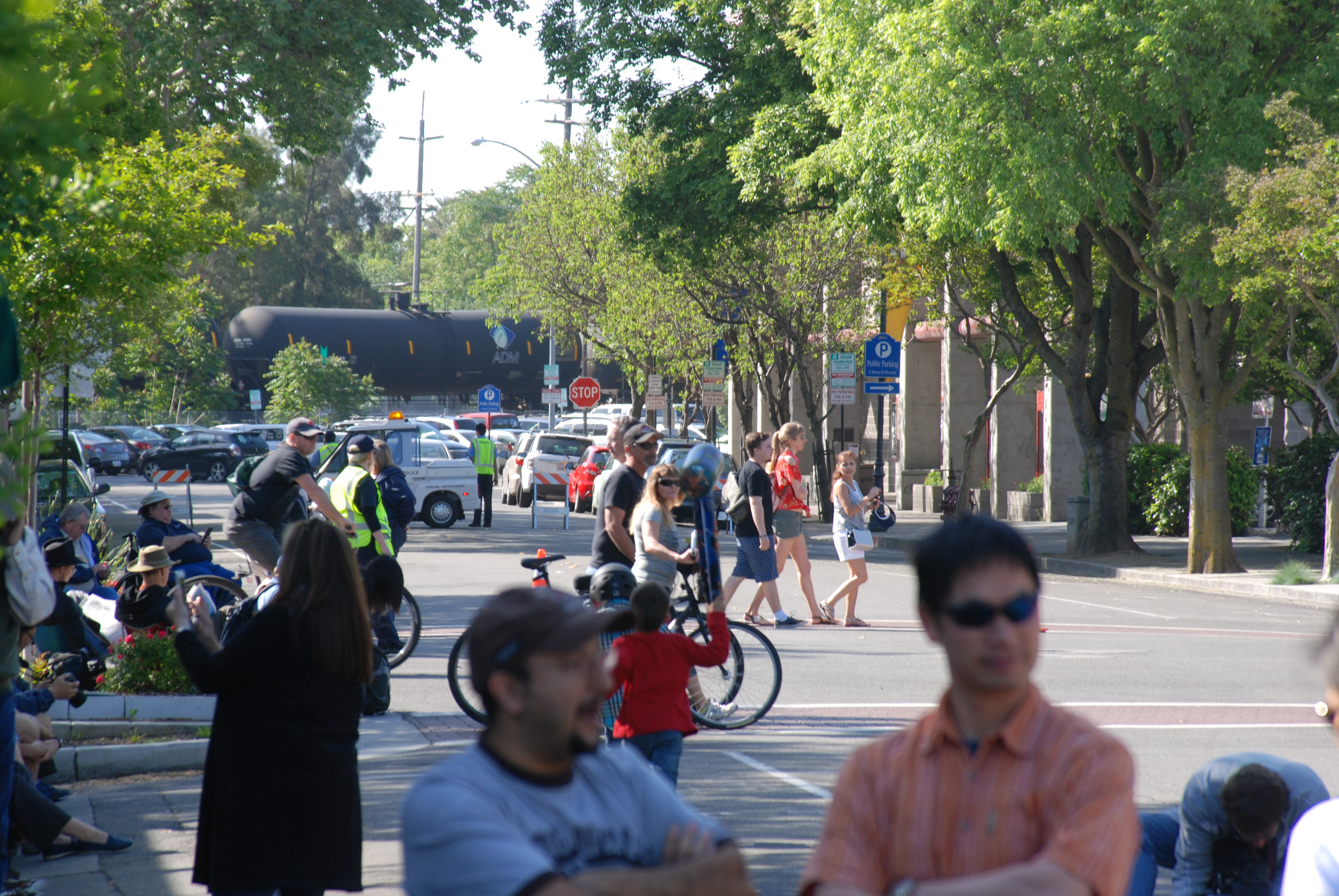 Cross-posted from the Davis Enterprise, June 8, 2014

What: Workshop on how to respond to a draft EIR, featuring a PowerPoint presentation by Davis city staffer Mike Webb, sponsored by Yolano Climate Action

I’m proud of our city. The Davis City Council took on crude-by-rail transport through our community, just as I have seen it tackle other difficult issues — with the willingness to look beneath the surface, find out what is important and then figure out what to do.

I’m sure the council members would have preferred shrugging off the crude-by-rail problem, leaving it for the federal government to handle, but we citizens pressed them, and to their credit, they became regional leaders.

The problem: The issue isn’t abstract for Davis. If two proposals are approved down-rail from us, we soon could be seeing 180 tank cars coming right through our town every day, carrying the highly volatile North Dakota Bakken crude oil in the older, unsafe DOT111 cars.

A proposed rail terminal at the Benicia Valero refinery would bring 70,000 barrels a day, which equals a train of 100 cars, and a proposed rail spur at the Phillips 66 Santa Maria refinery in San Luis Obispo County would bring another 80 cars per day through Davis on the Capitol Corridor route.

When a group of local citizens approached the Davis Natural Resources Commission in January with our concerns, we found a receptive audience. Those concerns are numerous: unsafe tank cars prone to rupture, uninspected rails, the nature of volatile crude oil and dirty tar sands, oil train exclusion from the right-to-know laws, substantially increased numbers of serious oil train accidents and spills, and skyrocketing projections for the number of oil trains entering California.

The commission elevated the citizen recommendations to the City Council.

City goals: The council listened, and noted that Spokane, Bellingham, Seattle, and Vancouver, Washington, and, more recently, Berkeley and Richmond, had all passed resolutions protesting crude-by-rail transport through their cities. They assigned staff to prepare a report and later adopted broad goals including to:

* Assure top-quality fire, police, emergency and other services to promote the health, safety and well-being of all residents and neighborhoods; and

* Create and maintain an environment that promotes safety and well-being.

Based on these goals, on Earth Day, April 22, the Davis City Council took a strong stand and adopted Resolution 14 opposing transportation of crude oil through the city of Davis and adjacent habitat, thus including the Yolo Causeway with its trestle tracks. It is well worth reading the whole document, posted at www.yolanoclimateaction.org or at www.cityofdavis.org under the City Council agenda for April 22. Other cities and counties in our region have requested copies of the Davis resolution as they prepare their own.

Leading the region: Meanwhile, Mike Webb, the staff member assigned to research crude-by-rail, along with City Attorney Harriet Steiner, contacted neighboring jurisdictions of Sacramento, West Sacramento, Dixon and Yolo and Solano counties to alert them also to the dangers. Together, our staff convinced the Sacramento Area Council of Governments to hold a meeting on oil trains on April 17, and that group put the item on the agenda for the next full SACOG meeting.

The jurisdictions divided up the various tasks, mostly focused on public safety, but also on siding storage and getting more information/assistance from Union Pacific, the California Public Utilities Commission and even the refineries. The SACOG representatives who attended the Capital-to-Capital meetings in Washington, D.C., last month took our regional concerns directly to our California elected officials, Reps. Doris Matsui and John Garamendi.

Additionally, our city is pursuing with Union Pacific a high-sensitivity rail situation in Davis where there is a curve and also crossover switches, both requiring an unusual —and dangerous — slower speed of 10 mph.

Comments: The next step is an opportunity for cities and organizations to study the draft environmental impact report for the Valero Project, which will be released June 17 for public review. Written comments are admitted to the record, and the report authors must respond to each comment, although similar comments may be grouped together. Those who respond have 45 days, probably extended to 60 to 90 days, to submit written comments.

The city of Davis isn’t waiting for the EIR release; it is already planning its comments and inviting neighboring jurisdictions to join them. SACOG members are working together now. We citizens can be grateful that our city is speaking up on behalf of our safety.

The city manager of Lynchburg, Virginia, did not even know that trains of Bakken oil were passing through his town. On April 30, 17 cars derailed and the ensuing flames shot up eight stories high while three cars leaked 25,000 gallons of crude into the James River, a source of drinking water. Fortunately, Davis is taking proactive steps to avert such accidents.

A number of environmental groups such as the Natural Resources Defense Council, Sierra Club, Earth Justice, Oil Change International and others will be weighing in on the draft EIR as well, with sharply focused comments on safety, health, water and air contamination, and whatever other weaknesses or unmitigated concerns they find in the EIR.

Time for action! Democracy is, above all, about each of us voicing our concerns. Under the California Environmental Quality Act, the draft EIR provides every individual affected by a decision with a chance to be heard. Every comment letter becomes a part of the EIR document and receives a response in the final EIR.

Therefore, we have serious work to do to become informed about the impact of unit trains of crude oil passing through Davis and to read all or significant parts of the draft EIR document. The time we invest in expressing particular concerns could make a difference in terms of mitigations granted or possibly influence whether the Benicia Planning Commission, and ultimately the Benicia City Council, vote for or against the Valero rail project.

There is a helpful resources document posted for those who wish to read up on crude-by-rail transport at www.yolanoclimateaction.org  and also here.

Public Workshop:  Yolano Climate Action will host a workshop on how to respond to a draft EIR, including an instructional PowerPoint presentation by Mike Webb plus tips and discussion on commentary topics for the Valero project DEIR, on Wednesday, June 18, from 7 to 9 p.m. in the Davis Community Church Fellowship Hall, 421 D St.

Watch The Enterprise for reminders, or check the calendars and articles at www.yolanoclimateaction.org and www.cooldavis.org, or contact me at lnittler@sbcglobal.net.

Looking ahead: The draft EIR for the Santa Maria rail spur project is expected to be released in July, offering a second chance to use newly honed skills!

— Lynne Nittler is a Davis resident and environmental activist as well as a member of Cool Davis.

Food Fairy: Cooking while on quarantine

“But the buildup of CO2 is a bit like trash in a landfill. As we keep emitting, it keeps piling up. The crisis has slowed emissions, but not enough to show up perceptibly at Mauna Loa. What will matter much more is the trajectory we take coming out of this situation.” ... See MoreSee Less

“The crisis has slowed emissions, but not enough to show up perceptibly at Mauna Loa. What will matter much more is the trajectory we take coming out of this situation.”