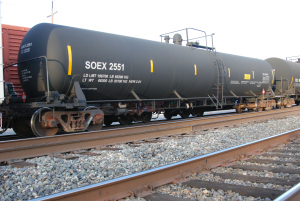 by Lynne Nittler May 21, 2014
Transportation

Workshop on How to Respond to the Draft EIR
Wednesday, June 18 from 7:00-9:00 p.m.
Fellowship Hall at Davis Community Church (421 D Street)
Instruction, brainstorming, and organizing our responses
Refreshments!

The Draft EIR for the Valero rail terminal Project in Benicia (70,000 barrels of crude oil /day or one unit train of 100 cars over 1 mile) will be released for a 45-day public comment period on June 17, with a possible extension to 60 or 90 days for review.

Our city will comment and has invited surrounding jurisdictions to join them. Other organizations and concerned individuals are also encouraged to make written comments during the review period.

• The Enterprise op-ed from June 8 gives an overview on developments in Davis.
http://www.davisenterprise.com/forum/opinion-columns/crude-oil-trains-through-davis-its-time-for-action/

• Report: Oil by Rail Safety in California by California Office of Emergency Services. Findings of the Rail Safety Working Group convened by the Governor’s Office January, 2014 and published June 10, 2014.
http://bit.ly/OBR-page

• http://www.priceofoil.org/rail New Report:   Runaway Train: The Reckless Expansion of Crude By Rail in North America  is the first in a series, exposing North America’s booming crude-by-rail industry. It is published in conjunction with the launch of a unique interactive online map of crude-by-rail terminals and potential routes in North America. Excellent!

• http://www.beniciaindependent.com Find posts of all the official documents related to the proposed project as well as a plethora of articles

• An article on liability, possibly an angle that will not be addressed adequately in the DEIR.
http://www.desmogblog.com/2014/03/17/record-year-oil-train-accidents-leaves-insurers-wary
Gov. Brown added $6.7 million to the Office of Spill Prevention & Response to handle accidents. It won’t go far in a catastrophe.

• More on risk assessment for railroads and who will be responsible for liability.
http://daily.sightline.org/2014/05/19/risk-assessment-for-railroads/

Key areas our up-rail responses may include:
• public safety (There is still little coming out of PHMSA (DOT Pipeline and Hazardous Materials Safety Administration) or FRA (U.S. Federal Railroad Administration) or DOT (Department of Transportation) at the federal level, so states and cities are on their own.)
• the environmental hazards of spills,
• the industry exemption from the Right-to-know laws,
• health risks,
• conflicts of interest for the use of the rails (Capital Corridor commutes)
• lack of adequate liability coverage for accidents and spills, and
• the impact on climate change

The city of Benicia has to respond to all comments in their final EIR, so the more specific, thoughtful and numerous our comments, the better. Different people can address different aspects.

Another opportunity for citizen response: The Draft EIR for the Phillips 66 Santa Maria refinery in San Luis Obispo County for a rail spur for daily oil trains of 80 cars per week will be released this summer, possibly in July.