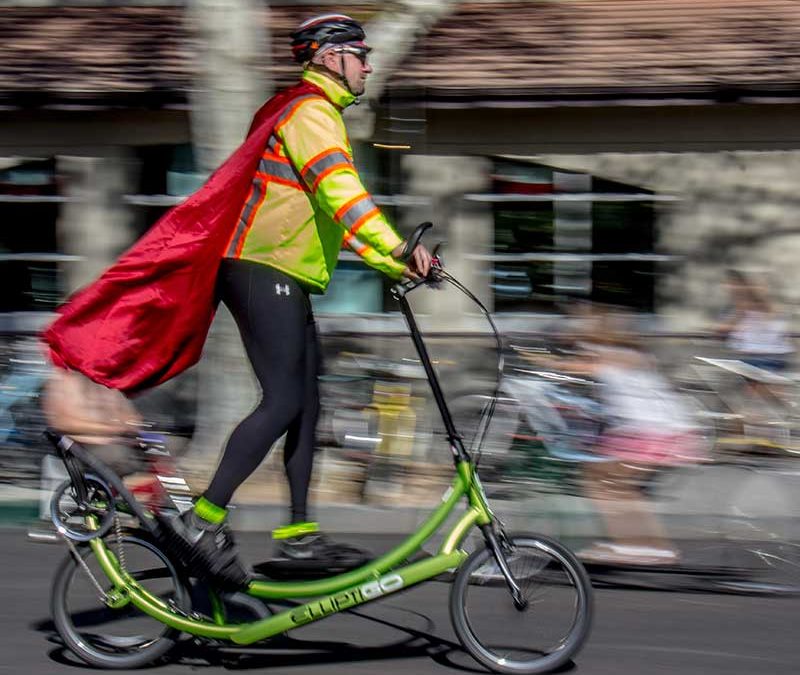 Well, our name is Cool Davis, then early this year we won the California Coolest City award, so getting ‘cooler all the time’ seemed an apt slogan to describe Cool Davis fourth annual festival.

The five-hour-long event on Saturday October 12 certainly managed to live up to the slogan. Over 3000 people turned up for a festival that showcased not only every aspect of sustainable living, but combined it with great music, amazing bike contraptions, mouthwatering food demonstrations, and countless tips and inspiration for reducing our personal and our community’s carbon footprint.

Before dawn broke, Cool Davis volunteers were unpacking tables, wrestling with tents and lugging chairs and exhibits across Central Park. As the day warmed, people streamed into the park in ever-growing numbers to wander among the many booths featuring local businesses, non-profit advocacy groups, and children’s activities.

At the heart of the festival was a tent dedicated to ‘Cool Solutions’ where anyone could get advice and tips on easy ways to reduce their carbon emissions and save money, too.

Over 235 participants submitted checklists telling about what they are already doing and what they would like to do in the future to reduce their household greenhouse gas emissions. Chris Jones, a climate researcher for UC Berkeley and coordinator of Cool California, spun a giant wheel and dished out prizes of shoulder bags, succulents, posters and more for all those who participated.

For those who wanted to get their hands dirty, the worm compost exhibit proved a constant draw especially for children wanting to hold a wiggly worm. A gardening workshop helped budding gardeners learn more about xeriscaping, water conserving irrigation, vermiculture, bugs and blooms, insects and pollinators, water-wise, California natives, and Arboretum All-star plants.

Visitors learned how to unplug their kitchens to save time and electricity and still produce delicious dishes from Chef Debra Chase. Dan Flynn and Amina Harris, from UC Davis tested everyone’s palettes with tastings of local olive oils and honey.

Milton Kalish from the newly-formed Yolano Climate Action Group had a convoy of bikes with the message: ‘Stop Climate Chaos.’ Kalish was keen to make the point that all our local climate actions will need to be accompanied by effective action at state and federal level if we are to make a real difference and stop worsening climate change.

Kalish sounded the alarm that tar sands are soon expected to be shipped by rail through Davis. Volunteers at the Citizens Climate Lobby and the new Interfaith Coalition for Climate Justice echoed his call for people to mobilize to change policy.

At the far end of the park, over 10 cars were running engines yet not a sound was to be heard. The reason of course was that they were all electric. Aided by a mixture of car sale reps and local electric car-owner enthusiasts, the display was a perfect place for people to look at the ever-growing options of electric cars on the market and will no doubt assist some in making the plunge on their next purchase.

Third Street meanwhile was taken over by bikes and experienced probably the first ever game of bike polo, an exhilarating high-octane spectacle which included a few dramatic falls.

The whole festival was accompanied by a wonderful soundtrack of some of the best of Davis’ musicians and artists. Mm Mm Good, Sam Alfaro Native American Folk Music, No Bones About It! Jazz Ensemble, The Spokes and Fiesta Dance N’ Fitness all did enthralling sets. Perhaps one of the highlights though was when the funky, positive and upbeat music band, Tha Dirt Feelin joined forces in an impromptu synchronicity of beats and melody with the Bakuhatsu Taiko Drummers.

As the applause died down, Tha Dirt Feeling loaded up their double bass, guitars and drums on a bike trailer and headed off. A perfect embodiment that reducing your carbon footprint can lead to healthier and ‘cooler’ lives.

The festival involved a huge amount of work by a team of volunteers, particularly Chris Granger and Kerry Daane Loux who coordinated the festival for the second year in a row, and Festival Leads Christal Waters, Bike Circus: Lynne Nittler and Anya McCann, Demonstrations: Bill Heinicke, Cool Solutions Center; Kristin Heinemeyer, Cool Homes; Jenny Estramera, Entertainment; and Eugen Dunlap, EV Show and Tell.  Thanks to our sponsors who made the festival possible, in particular the City of Davis, REC Solar, Dos Coyotes and the Davis Farmers Market who helped host the festival and Unitrans that provided free public transit on the day. Thanks are also due to the Davis Enterprise, Unitarian Church of Davis, Yolo Federal Credit Union, Yolo Energy Watch, A Grand Affair , Blue Oak Energy , Davis Waste Removal , Davis Food Coop , SIEMENS , The Alive Network , Travis Credit Union, Lutheran Church of the Incarnation , and Carbahal & Co and the many volunteers who joined in.

It is impossible to capture the whole festival in one article. Here is the unbelievable list of Davis eco-heroes who made the festival what it was: