Home > Energy > Will Your Building Keep Its Cool As California Heats Up? 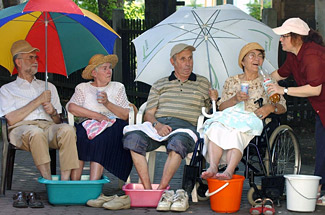 Will Your Building Keep Its Cool As California Heats Up?

(By Tom Phillips, crossposted from Resilient Design Institute) Floods and ice storms cause some the biggest economic losses in the US, but heat storms are the leading cause of death over the last 10 years among weather events in the US.

Climate change models for many regions predict that heat storms are expected to become more frequent and intense by 2039 or sooner, which is well within the lifetime of today’s buildings. In the 2020s, the western and central U.S. could experience at least five heat waves per decade that are at least as intense as the worst heat wave ever recorded from 1951-1999, according to Stanford University climate scientists. In the 2030’s, most of the U.S. could experience four such extreme heat waves, and the heat waves would be longer. Some western states could experience up to seven extreme heat waves per decade, while some eastern states could experience four. “I did not expect to see anything this large within the next three decades. This was definitely a surprise”, said Noah Diffenbaugh from Stanford.

By 2059, the eastern U.S. the could experience significant increases in the intensity, frequency, and duration of heat waves in nearly all areas, especially in the Northeast, eastern Midwest, and Florida, according to University of Tennessee – Knoxville scientists. When the projected increase in the heat wave duration was factored in, the total numbers of heat wave days in the Northeast and eastern Midwest were projected to exceed those the Southeast.

The indoor environment is an important shelter from heat storms. The most vulnerable to heat stress include the elderly, young children, and persons with certain medical conditions. Although these groups spend most of their time indoors, only limited research has been done on health effects of extreme heat indoors. A Toronto study of the elderly found higher mortality risks during heat waves among those who died at home or in long-term-care facilities, compared to those who died in hospitals. U.S. studies of the elderly have found that they tend to underuse adaptation methods at home during heat storms.

Thermal comfort problems are already the most common complaint in buildings, so climate change will clearly exacerbate thermal comfort problems and exposures to extreme heat in homes and other building types. The 2011 National Academy of Sciences report, “Climate Change, the Indoor Environment, and Health,” recommended that building codes account for climate change projections and that buildings have fail-safe ventilation methods in the event of power outages or ventilation system breakdown.

All of this raises the question: how will we keep our buildings comfortable and safe from more frequent and more intense heat storms? We cannot increase the size and running time of our air conditioners without increasing greenhouse gas (GHG) emissions, electricity costs, outdoor air pollution from electricity generation, and urban heat island effects. Furthermore, we may not want to rely on air conditioners so much, because power outages are expected to become more frequent and more prolonged. Low-energy buildings can avoid overheating if solar and other heat gains are controlled carefully. However, buildings are typically designed using greatly outdated weather data, not the projections for weather that is expected over the lifetime of the building.

Retrofits of existing buildings, which make up the lion’s share of our building stock and potential GHG reductions from the building sector, also use design standards based on outdated weather data. As Dr. Pencheon of England’s National Health Services concludes regarding hospitals, “It’s not that we actually need more buildings. We just need better buildings. Buildings that are fit for purpose, fit for the future.” By mid-century, there are expected to be more heat wave days in the Northeast and eastern Midwest than in the Southeast, according to new modeling. Source: University of Tennessee.

Fortunately, some groups around the world are beginning to take preventive actions to make buildings more “resilient” or “future-proof” to heat storms.

British researchers recently used climate model predictions to map which post-1967 hospitals in England were most vulnerable to increased heat-health hazards. They also monitored temperatures inside and outside 100 hospitals, calibrated the indoor temperature models, and evaluated renovation options for thermal comfort and energy efficiency in the future. Several renovation options met thermal comfort standards, but some would not meet overall energy targets of 55-65 GJ/100 m2. In addition, a neo-natal intensive care ward was renovated in order to maintain comfortable temperatures in the near future. Similar work is also being conducted on renovation of schools and offices and on adaptation planning for elder care facilities, communities, and cities.

Urban planners in Toronto considered climate change when renovating a high-rise apartment building. They used a vulnerability assessment method and a suite of climate model predictions from Environment Canada to rank potential heating and cooling problems over the lifetime of the building. They also addressed other impacts of climate change such as increased flooding, high winds, and water leakage around window air conditioners that might be added.

Researchers at Lawrence Berkeley National Laboratory used climate models to predict changes in local weather data and energy use in hospitals, schools, and other commercial building types over the next 100 years. The results showed dramatic increases in future cooling demand for some regions of the state, especially in smaller buildings. Much higher peak electricity demand and likelihood of power outages during heat storms were also predicted. The researchers concluded that the low-energy cooling methods that are common in parts of the state, such as natural ventilation and evaporative cooling, might not work so well once the climate warms.

The researchers concluded that the low-energy cooling methods that are common in parts of the state, such as natural ventilation and evaporative cooling, might not work so well once the climate warms.

The California Energy Commission has recently funded the development of weather files for expected climate change and for finer spatial resolution of microclimate weather data. The assumptions for lifetimes of nonresidential buildings will be evaluated. Guidance for the retrofit of existing buildings will also be developed. The number of days exceeding 100°F between June 1st and September 15th in 2012. Source: U.S. Department of Agriculture.

These efforts are part of a growing move to mainstream climate change adaptation into public health, thermal comfort, and building energy practices. In the meantime, much can be done to reduce overheating problems in existing and new buildings by commissioning and maintaining the HVAC systems, adding external shading, overhead fans and thermal mass, optimizing night cooling, and reducing urban heat island effects. Such measures also produce energy savings, cost savings, and GHG reductions.

How vulnerable are your building occupants to heat stress from extended heat storms and power outages? What is the cost of inaction? With our climate becoming more and more extreme, the buildings that protect the most vulnerable persons in our population have the most urgent need for future proofing.