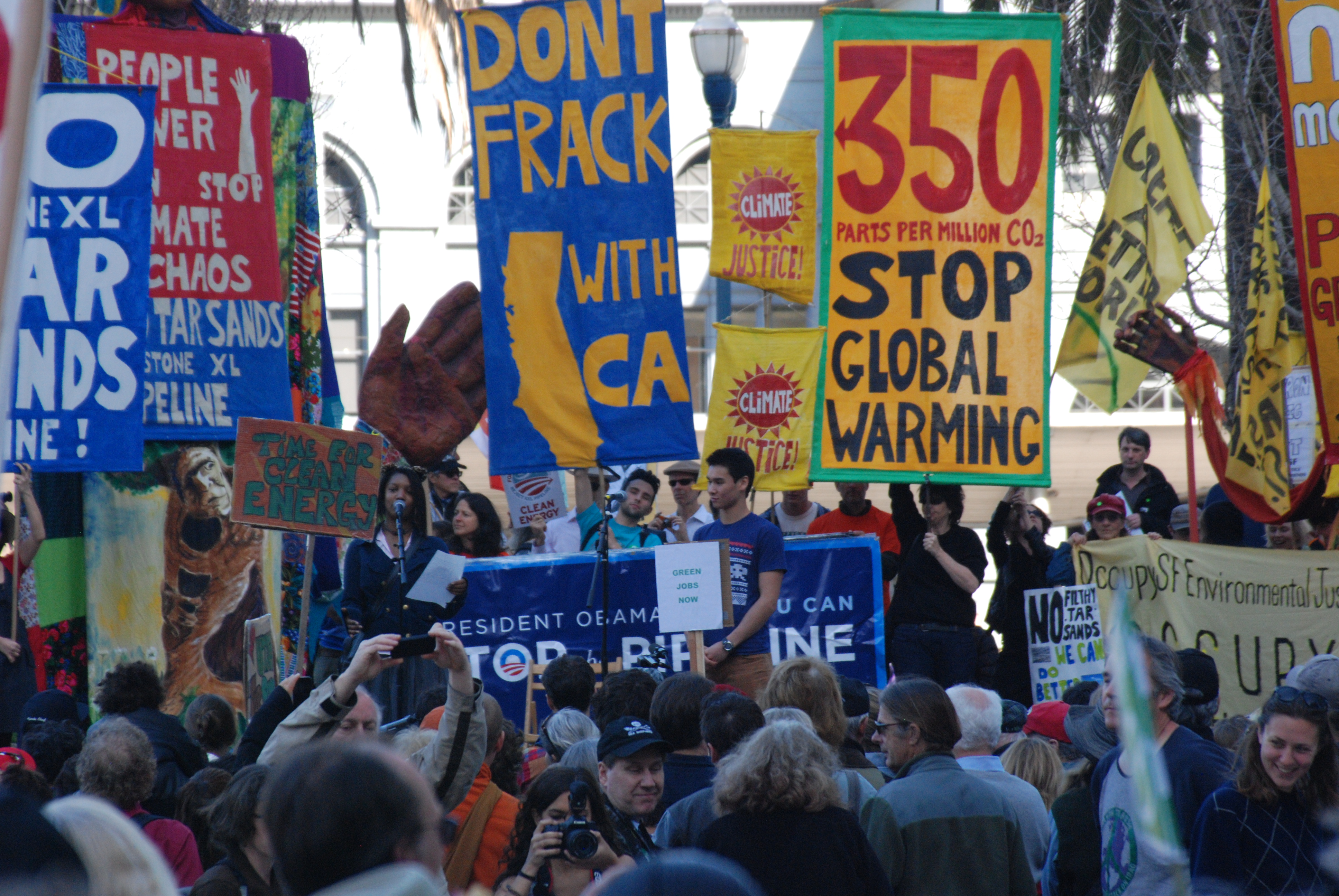 The Keystone XL Pipeline is the current battleground of the emerging Climate Movement.  The time has come time for activists to draw a line against more carbon emissions into the atmosphere and hold it.  As Michael Grunwald states in his Time magazine commentary,”It’s a choice between Big Oil and a more sustainable planet.  The right answer isn’t always somewhere in the middle.”  (Time, March 11, 2013)

On President’s Day, February 17, people gathered to protest the Keystone XL Pipeline in 11 cities across the country, while more than 40,000 converged on the White House in Washington D.C.  Among the 5,000 marching in San Francisco were four Cool Davis Board members, several Cool Davis families, and sixteen CalPIRG UC Davis students.

Why did we give up a sunny Sunday afternoon to carpool to BART and head across the bay to a Market Street Forward on Climate Rally?

Judy Moores, President of Cool Davis Foundation, considered flying to Washington DC to be part of the historic gathering there, but decided to keep a lower carbon footprint and march closer to home.  “When 350.org proposed the President’s Day “Forward on Climate” demonstrations to lobby against the Keystone XL pipeline, I was ready to go,” Judy explained.  “As the climate crisis deepens by the month, and as a mother and grandmother who cares deeply about the current and future health of our planet, how could I not be ready to take to the streets?”

Her husband Eldridge came along, not willing to let her go to a protest march without him.  To his surprise, it was a friendly, festive gathering despite the seriousness of the threat of climate change.  In the end, he was proud to add one more to the number of people gathered in protest.

Juliette Beck admitted, “I fear for my children’s future, but when we march and take collective action, we’re part of the solution.  Feb. 17 was history in the making, a watershed moment.  President Obama has to take more action NOW.  I wanted my daughters to be part of the movement that will define their future.”

“It feels like there’s an opening, a little bit of political space, the possibility of a turning point,” Nick Buxton added.

Juliette and Nick gave their 4-year-old daughter Sumaya the choice.  Did she want to go to church, to the park or to the protest?  Sumaya, a child already familiar with protests, chose the Climate rally hands down.  She had a blast!  Her parents also brought their 4-month old daughter Calía and wondered why their friends came without their three children.

“Marches are fun!” Nick and Juliette agreed.  “It’s important how we raise the next generation. Nick and I believe protest rallies should be a family affair. Besides, other marchers need to see children and be reminded of why we march.”

Kristin Heinemeier brought both her kids and made a weekend of it.  They took the train and stayed at the Palace Hotel on Market Street.  Kristin’s kids sometimes complain when she stays late at Cool Davis planning meetings, though she tells them it’s for their sake.  Not this time.  Kristin reported, “The rally was a lot of fun.  I was surprised at the number of people who wanted to take a picture of my little radicals holding their yellow signs.”  Check out the photo of her protestors Benjamin (10) and Peter (13) Holderbein.

… together we sent a strong message in support clean energy and against the Keystone pipeline and its carbon-intensive tar sand.

Board member Bill Heinicke couldn’t convince his teenage daughter to accompany him to San Francisco, but he came himself, saying, “Sometimes it can be hard to know what to do, or what else to do, to support a cause. The SF Climate Rally and the others around the country were dependent on “numbers” to be successful. I wanted to help and that meant I had to go. It’s one of those things you can’t leave for someone else to do. There were thousands who felt the same, and together we sent a strong message in support clean energy and against the Keystone pipeline and its carbon-intensive tar sand. Like the President said last summer, ‘Not the easy way – a better way!’”

For the first time we have a grass roots movement developing, and you are part of it.

Catherine Stobie, the CalPIRG organizer at UC Davis, thanked the 16 UC Davis students for taking time to join the march.  “This effort really matters,” she encouraged them.  “For the first time we have a grass roots movement developing, and you are part of it.  This issue of the Keystone Pipeline affects your present and your future.  It will take courage for Obama to stand up to TransCanada; he needs to know there are thousands of us supporting him to do the right thing.”

Beth Robbins, a grandmother who facilitates the Care for God’s Creation Commission at St. Martin’s Episcopal Church, was arrested at the first Washington, D.C. rally against the Keystone XL. She said, “Global warming is the largest moral issue facing us today. Our actions now are giving our grandchildren the climate they must live in.””As people of God, across all faith groups, we recognize we are called to care for God’s creation, not simply use and destroy it.”  Beth continued,  “We all have responsibility to give justice to the poor and disadvantaged who are most immediately affected by climate change though they have caused the least of it, to prevent the death of plant and animal species, and to preserve the natural beauty of the earth.”

“Unfortunately, we humans were able to build a society based on burning energy from fossil fuels, without taking into account that we were altering the very climate we depend upon.  Now we must wean ourselves from that fossil fuel dependency,” Beth concluded.

As for me, I have lived the decades of civil rights  and Vietnam War demonstrations, the first glorious vision of earthrise seen from outer space followed by the first Earth Day, the enactment of landmark environmental protections, and sadly the recent degradation of those same protections now under almost constant attack.  Climate change has become the overarching critical issue of our time. Its influence is already apparent, and in the next few decades, its consequences will be felt by most every person alive. This nascent climate movement signals that large numbers of us are at last stepping forward on behalf of our children and our blue-green jewel of a planet.  It was an obligation, an honor, and a joy to be one of the crowd.

SF Supervisor John Avalos said, “Twenty years of inaction on climate change means we need system change. There is an alternative.  A democracy that’s founded on an economic system that promotes sustainable life and communities, that provides affordable housing, universal health care and high quality education for everyone — these are all essential parts of a healthy and clean environment.  In San Francisco we know we cannot wait for the federal government, so we have taken action into our own hands to reduce our dependence on fossil fuels.”

He went on to announce the formation of CleanPowerSanFrancisco, providing cleaner public electricity, and his move to divest city retirement funds from the corporate forces that continue to push an unsustainable oil economy.

“…we have taken action into our own hands to reduce our dependence on fossil fuels.”

The speakers at the February 17 Climate Rally were realistic.  They urged demonstrators to look around and understand that we will need to stand up together again and again, engaging in civil disobedience when necessary, to redirect the momentum away from fossil fuel extraction in all its forms toward a clean energy future with a healthful, sustainable lifestyle for all.