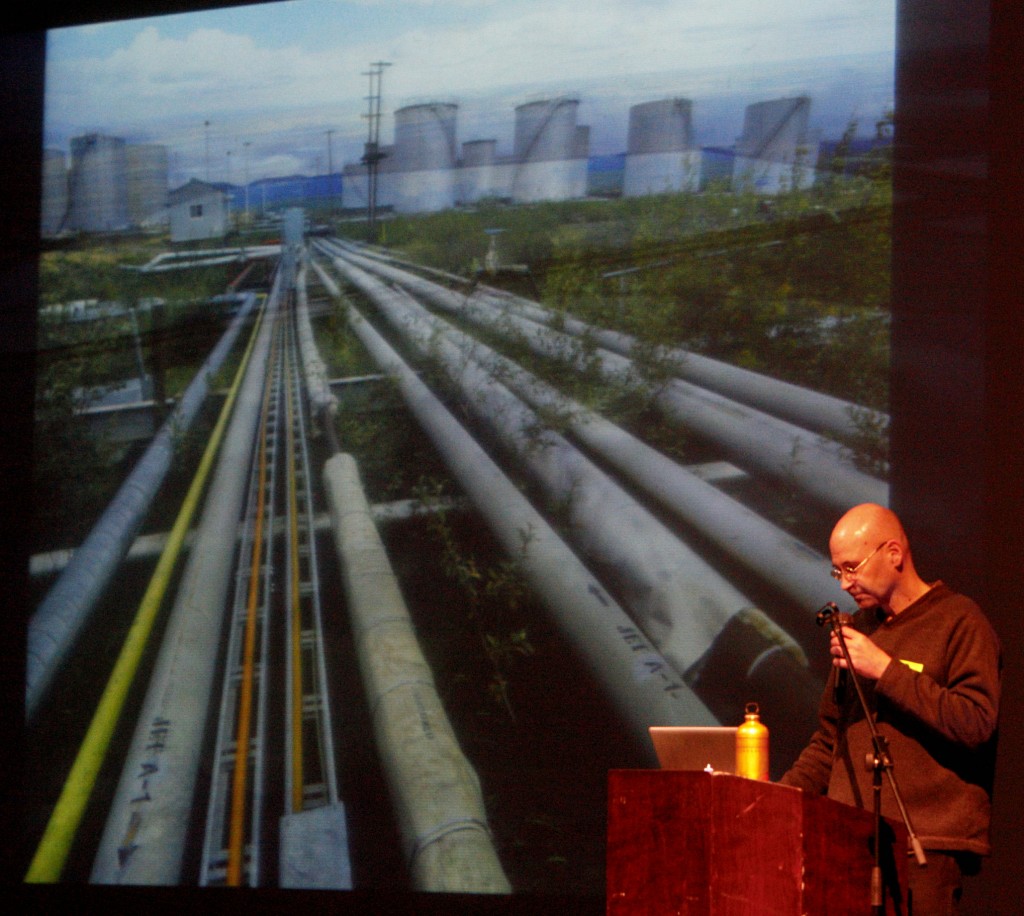 The before and after photos provide a backdrop for Garth Lenz’s message.

Before: A lush landscape of color: trees, wetlands and wildlife with mountain ranges in the background.

After: More of a moonscape really, devoid of color, full of sludge ponds, with trees clearcut and wetlands drained.

This is the Alberta Tar Sands, located in Lenz’s native Canada, and home to the world’s third-largest oil reserves, where the tarry substance bitumen, a form of petroleum, is mined and refined into crude oil. The tar sands represent the single largest source of foreign oil for the United States.

But the tar sands — and plans to increase production here — have become a hot spot in the fight over global warming. A proposed pipeline — the Keystone XL — would carry millions of gallons of that crude oil down through the central United States to the Gulf Coast, where it would be shipped all over the world.

Climate scientists and environmentalists around the world have been fighting the project for years and the pipeline became an issue during the presidential campaign last year. The Obama Administration is expected to make a decision on whether to permit the project in March.

As the debate revolves around the use of crude oil and the impact on global warming, Lenz, a conservation photographer, has focused on the more immediate impact of tar sand mining in Alberta. His work showing the changing landscape of the area has appeared in numerous publications, including Time magazine last spring.

On Monday, he was in Davis, presenting his piece, “The True Cost of Oil,” to students at Davis High School during the afternoon as well as to community members later in the evening.

He will present his work again on Tuesday at 5 p.m. in Wellman Hall, Room 2, on the UC Davis campus. The public is welcome to attend, said organizer Lynne Nittler.

Lenz’s photos of the tar sands and surrounding areas are taken from a plane, a particularly unique experience, he told students in DHS teacher Sherri Sandberg’s science class.

“The doors are off or the windows are open,” he said, and the temperature outside is around minus 30 degrees, “but you can’t wear heavy gloves (while taking pictures).”

“After about 30 to 40 seconds you begin to lose all sensation in your hands,” he said.

He has shot photos all over the world, from Patagonia to China to Europe, he said, but the tar fields have become one of his favorite locations to shoot, he said, because of the beautiful images that seduce people, then force a double-take.

Whenever you can jolt people, he said, that’s a good thing.

It’s one of the reasons Nittler helped arrange his visit to Davis.

“When you see those photographs, it really brings it home to you,” she said.

See more of Lenz’s work on his website, http://www.garthlenz.com.