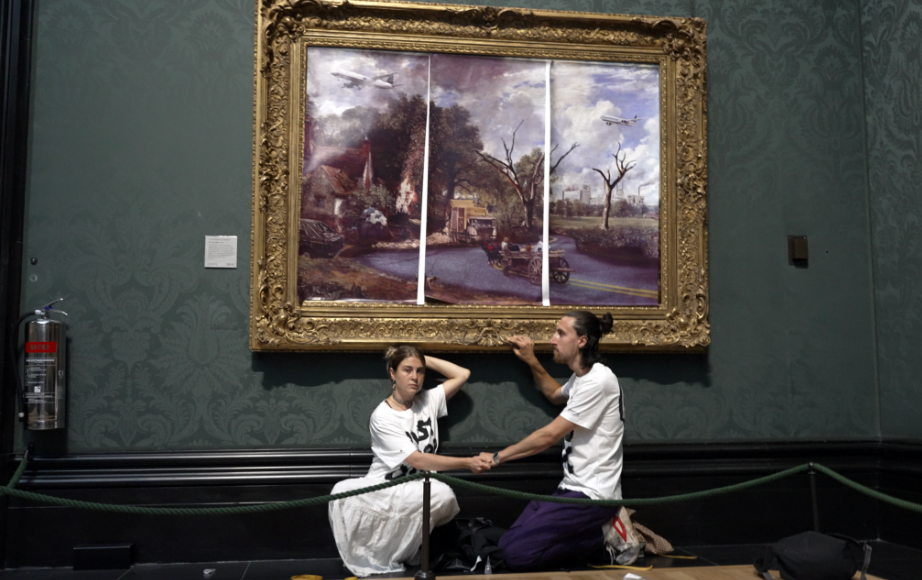 At the end of October, protestors walked into the National Gallery in London and threw soup at Van Gogh’s “Sunflowers” before gluing their hands to the museum wall. These people were part of the protest group Just Stop Oil, a coalition of groups working to stop the UK government from allowing the development and production of fossil fuels in the UK, with projects in the USA, Sweden, and Canada, to name a few. Though the painting was encased in glass and not harmed, this event sparked mass media attention and brought controversy surrounding these protest methods.

Though many say that the negative backlash means these methods are counter productive, there is some evidence that suggests the bad public image may not negatively affect how people view the cause these protestors are fighting for.

In addition, I also believe that the class of people affected by the protests plays a significant factor in public opinion. People are generally less likely to feel sympathetic when others are denied luxuries compared to being denied necessities, and this carries over to the public’s reaction to protests on freeways versus protests on private jet runways.

“What is worth more, art or life?” asked one of the protestors. They continued to speak, mentioning the connection between the cost-of-living crisis, the food crisis, and climate change.

“Millions are being forced to move and tens of thousands face starvation. This is the future we choose for ourselves if we push for new oil and gas.”

Protestors hope that by publicly bringing awareness to these issues via non-violent protest, the government will meet their demand to stop issuing new gas and oil licenses.

This is not the first time, and likely will not be the last time, Just Stop Oil has conducted a demonstration like this. In the past year, the group has done similar actions at other art galleries in addition to disrupting soccer games and attempting to disrupt the Grand Prix.

Disruptions like this are often unpopular, even more so when they can bring potential consequences to the people they’re disrupting, like during demonstrations that block roads. One recent example of this being Just Stop Oil’s blockage of the roads around Westminster. People may miss work and kids can miss school, making reactions to such protests especially strong.

Unpopularity is not the deciding factor in success

Some media outlets, like the DailyMail, have been deliberate in the language they use when referring to these protests, calling activists “eco-fascists” participating in “stunts.” Such language does have an effect on the reader and can cause audiences to view the people participating more negatively.

Often, people who are against protests of this nature may argue that low public support for the activist groups will make it so that change cannot happen. Surely, if there are not enough people who approve of their actions, they’ll never be able to bring change, right?

But while the image of these protest groups may suffer, many participants hold the belief that unpopularity is the price to pay to spread awareness for the cause and may be more effective than one might think.

A set of experiments done by Colin Davis, the Chair of Cognitive Psychology at the University of Bristol, showed that despite having low favorability with people, the actions of activists do not necessarily lower support for their demands. For many, though they did not support the activists’ methods, they did not have less concern for the cause because of them.

Additionally, public protests like this also have the potential to recruit more activists. The majority of people will never participate in demonstrations of this nature. Having the time to be able to join these types of protests and being willing to risk arrest are both essential prerequisites that many do not meet. As a result, it can be difficult to find new members that can help the movement. In getting such widespread publicity, activist groups can reach people who would otherwise never hear about them.

Just Stop Oil is not the only activist group. Last Generation, a German activist group, did something similar to Just Stop Oil about a week later, throwing mashed potatoes at Claude Monet’s “Les Meules.” They mentioned the same concerns in their statement, saying that “This painting is not going to be worth anything if we have to fight over food.”

Criticism for this event was similar to that of Just Stop Oil’s protest, mainly in concern for the painting.

The rich, the poor, and activism

Not all demonstrations are received badly by the public. Recently, activists from Extinction Rebellion blocked private planes from taking off in Amsterdam and garnered mostly positive attention on social media from what I’ve seen. Bicycles raced around the landing, and some protestors chained themselves to the plane. It has been described as funny, “the right way to protest,” and people have said that those flying “deserved it.”

But what is the difference between this protest and Just Stop Oil’s where they blocked off a road, when the two essentially had the same function–blocking traffic?

I believe class plays a big role in how demonstrations by activist groups are received. With private jets, the majority of people are unsympathetic to people unable to fly in them because of these protests. Why should they care? They’ll never fly in a private plane. Private airways are generally considered unnecessary: a luxury.

This is also the reason why public opinion was kinder towards the protest in the art gallery than towards the one that blocked roads. Art galleries are a place of privilege, requiring free time and money to be able to enter. There was a lot of focus on the preciousness of the painting and the potential damage that could have occurred to it, and very little about how this protest prevented people from seeing it for the day.

Going to an art gallery, like flying on a private plane, is nonessential.

Going to work, school, or the hospital are all places that require driving on the very highways and bridges being blocked by these protests. Blocking roads brings inconvenience to some, and massive consequences to others, who very likely need to work to live, and could potentially suffer greatly by being absent or late.

While disrupting people’s lives is the point of the protests, the public is acutely aware of who is being affected and the consequences they might face, which plays a large role in how they react to these methods.

Hillary Hoang is a writing intern for Cool Davis through the University Writing Program at UC Davis. Hillary is a Senior majoring in Managerial Economics with interests in video esssays who also volunteers as a tax intern, providing free tax assistance for low income residents of the greater Sacramento area.

James O’Brien podcast about Just Stop Oil tactics: “I believe they have found the perfect way to protest.” (Dec 7 2022)

US affiliated chapter of Just Stop Oil: Declare Emergency US

Sheila Shatford, 67, grandmother of two and former nurse from Bristol, who has already spent 13 days in prison for taking action with Just Stop Oil, said:

“As a baby boomer I have a responsibility and a need to stand beside all the brave young people who are prepared to put their careers and freedom on the line in order to stop the wanton destruction of their future and the misery and suffering happening right now as a result of climate breakdown.

“Shame on you Mr Sunak, for allowing your government to support oil and gas expansion, shame on you for allowing a new coal mine that nobody wants or needs. Shame on you for demonising peaceful people. You can ban us, revile us, lock us up but you won’t stop us. We will not be complicit in the destruction of everything we hold dear.”

“The stark reality is terrifying. If we continue down the road we are currently on we don’t have a future. We face starvation and misery and the loss of all we hold dear. Normal people need to take a stand and support Just Stop Oil in stopping new fossil fuel licences and moving towards a sustainable future.”

“The UN general secretary says that spending on new fossil fuel exploration is delusional. Our government is doing just that and I fear for my children’s future. My action is from the heart and the head. I know politicians can do the right thing if they listen to the facts. Their inaction is burning up our lives.  I want us all to have lives we can be proud of. Is it too much to ask for a safe future? Governments must end the greed of oil companies which is immoral and killing us.”

Are Just Stop Oil’s dramatic art museum protests hurting their own cause?

The Radical Act of Blocking Traffic