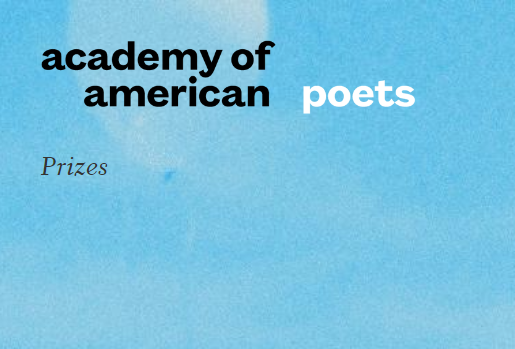 The Treehouse Climate Action Poem Prize is given to honor exceptional poems that help make real for readers the gravity of the vulnerable state of our environment. First place receives $1,000; second place, $750; and third place, $500. Winning poems will be featured in our popular Poem-a-Day series. The 2023 Treehouse Climate Action Poem Prize will be judged by climate scientist and author Dr. Peter Kalmus and poet Matthew Olzmann. Learn more here, submit by November 15, 2022 (11:59 p.m. ET). Sign up for Poem-a-Day to read the winning poems on selected dates: poets.org/poem-a-day

All applicants and selected award recipients agree that, as part of their eligibility to receive the Treehouse Climate Action Poem Prize, they will maintain the highest standards of fairness, decency and personal integrity, in the Academy’s sole discretion, including with adherence to all applicable laws and community values. The decisions of the Academy of American Poets regarding eligibility, both initial and throughout the award period, are final.

The winning poems and poets were:

“The vivid observations of ‘Insomniami’ manage to express outrage, panic, humour, despair, complicity, and ideas for action all at the same time. It asks that we confront the insanity of our present, while refusing to give up our future. We were impressed by the freshness of voice and the conviction of vision in these taut and bright stanzas.”

About the second and third-place poems, the judges wrote:

“The second stanza of ‘Origin Story’ won’t let us off the hook, reminding readers what is really at stake and what all this means, but at the same time, the poem rests in beauty and wonder and love and hope, teaching us to look, and look again.”

“Even as ‘Vanishing’ is a requiem for what is lost and what we’re losing, the poem is also rallying cry, refusing to erase the efforts of the planet’s youth and the many cries for climate justice ringing around the globe.”

Camille T. Dungy is the author of Trophic Cascade (Wesleyan University Press, 2017); Smith Blue (Southern Illinois University Press, 2011), winner of the 2010 Crab Orchard Open Book Prize; Suck on the Marrow (Red Hen Press, 2010); and What to Eat, What to Drink, What to Leave for Poison (Red Hen Press, 2006). She is also the author of Guidebook to Relative Strangers: Journeys into Race, Motherhood, and History (W. W. Norton, 2017), the editor of Black Nature: Four Centuries of African American Nature Poetry (UGA, 2009), and the co-editor of From the Fishouse: An Anthology of Poems that Sing, Rhyme, Resound, Syncopate, Alliterate, and Just Plain Sound Great (Persea Books, 2009). Among Dungy’s honors are fellowships from the Guggenheim Foundation, National Endowment for the Arts, Cave Canem, and the Bread Loaf Writers’ Conference. She is also a two-time recipient of the Northern California Book Award, in 2010 and 2011, and a Silver Medal Winner of the California Book Award. Dungy is a University Distinguished Professor at Colorado State University and lives in Fort Collins.

Dr. Katharine Wilkinson is an author, strategist, teacher, and one of 15 “women who will save the world,” according to Time magazine. Her books on climate include the bestselling anthology All We Can Save, The Drawdown Review, the New York Times bestseller Drawdown, and Between God & Green. Dr. Wilkinson co-founded and leads The All We Can Save Project with Dr. Ayana Elizabeth Johnson, in support of women leading on climate, and she co-hosts the podcast A Matter of Degrees, telling stories for the climate curious with Dr. Leah Stokes. Previously, Dr. Wilkinson was the principal writer and editor-in-chief at Project Drawdown. She speaks widely, including at National Geographic, Skoll World Forum, and the United Nations. Her TED Talk on climate and gender equality has more than 1.9 million views, and Apolitical named her one of the “100 most influential people in gender policy.” A homegrown Atlantan, Dr. Wilkinson holds a doctorate in geography and environment from Oxford, where she was a Rhodes Scholar, and a BA in religion from Sewanee, where she is now a visiting professor. She is happiest on a mountain or a horse. You can follow her on Twitter at @DrKWilkinson.

About the Academy of American Poets

The Academy of American Poets is the nation’s leading champion of poets and poetry with members in all fifty states. Founded in 1934, the organization produces Poets.org, the world’s largest publicly funded website for poets and poetry; National Poetry Month; the popular Poem-a-Day series; American Poets magazine; Teach This Poem and other award-winning resources for K-12 educators; and an annual series of poetry readings and special events. In addition, the Academy of American Poets coordinates a national Poetry Coalition working together to promote the value poets bring to our culture and the important contribution poetry makes in the lives of people of all ages and backgrounds. This year the organization has awarded more funds to poets than any other organization, giving a total of $1,250,000 to poets at various stages of their careers.

Treehouse Investments is a boutique distributed-infrastructure firm dedicated to reversing climate change. A family business, founded by a family from Puerto Rico, in 2007 Treehouse made a commitment to invest in a socially responsible way. Over the years Treehouse has become convinced that the only truly socially responsible investments are those which directly aim to reverse climate change.