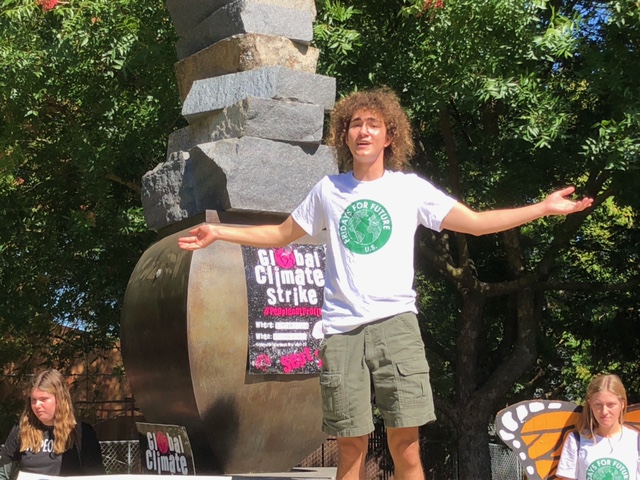 Editor’s Note: Text below is press release from Fridays for Future Davis

Youth leaders from Yolo County led a colorful all-ages march today in central Davis to protest the city’s failure to address the climate emergency. The marchers made their way from the library to central park and the city hall, mirroring thousands of actions across the world on September 23 organized by the #FridaysforFuture movement.

The young marchers denounced the city council and administration for their failure to listen to the demands of young people and for not giving them a seat at the table in the planning and delivery of the city’s new Climate Action and Adaptation Plan.

“We young people are the most impacted by climate change and yet our demands for action and change have consistently fallen on deaf ears in the City of Davis,” said Eliot Larson, coordinator of Fridays for Future Davis.

The march comes exactly three years after Davis’ biggest ever climate strike in September 2019 when almost 1000 young people walked out of school and marched downtown. At the time, the marchers presented a list of demands including all-electric new building construction, a moratorium on large single family homes, shoppers’ buses, energy retrofit incentives, and vegetarian-only food at schools and city events. Since then, there has been an almost weekly climate strike at the junction of 5th and B, directly across from Davis City Hall and the Davis Joint Unified School District.

“We have just faced a record heatwave with unbearable temperatures a couple of weeks ago. Yet our elected officials are still not treating this crisis as an emergency. They hold our future – whether we have a liveable planet or not – in their hands. The Earth’s clock is ticking. We cannot and will not wait until 2035 or 2030 for change to come. We have to act boldly now,” said sixteen-year old Larson.

Among the marchers is nine-year old Minsa Ali Muhammad, a student at Spring Lake Elementary in Woodland, whose family in Pakistan has seen their village, orchards, livestock, schools and places of worship devastated by unprecedented climate-induced flooding. Her ancestral homeland of Chitral is in the path of melting Himalayan glaciers. Recent glacial outbursts – flooding that sends rocks, mud and debris  downstream –have displaced hundreds of families that are now living in tents.

“We have to do everything we can to stop climate change. We have to do a better job of taking care of our Earth,” said Muhammad who called for emergency, solidarity action and is collecting funds for flood victims.

The marchers attempted to deliver a letter to Davis Mayor Lucas Frerichs with an updated list of priority climate actions, but Frerichs told organizers of today’s march he was unavailable.

After staging a “die-in” in Central Park symbolizing the loss of animal and plant species and harm to life-sustaining ecosystems,  young people shared their hopes, fears and frustration at the city’s lack of action.

Mattias Rowenbale, who attended the strike in 2019 and is now a senior at Davis High and the president of the school’s Environmental Club said, “I was in awe of this movement and the passion of the people of Davis. But today I am filled with anger. It’s hard to see a way forward. It’s hard to show the officials in Davis that they can have an impact.  But we must. We are just one community, but we CAN make a difference and set an example for the world.” 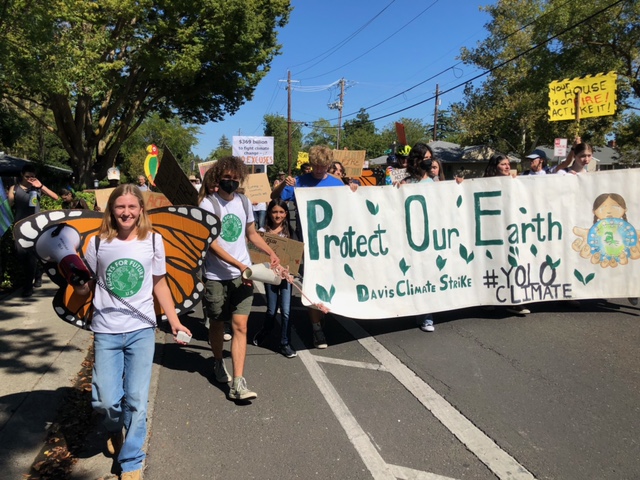 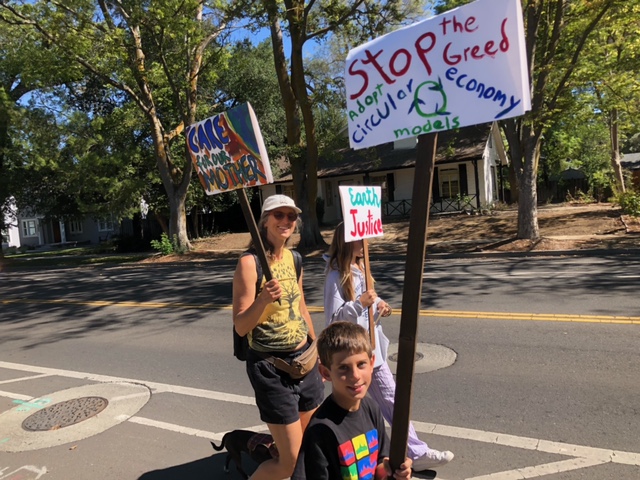 In 2019 we wrote a letter on behalf of myself, other youth leaders and most crucially the planet to the Davis Joint Unified School District, the Davis City Council and former Mayor of Davis, Ms. Partida. That letter was in essence a list of demands compiled by adult and youth climate leaders alike firmly insisting that immediate change be put into effect. We, most of us only children, expressed our deep fears and concerns as well as giving you our demands for logical and possible change. The letter was accepted and we were given implied assurances that these demands would be seriously considered and addressed. Unfortunately, those Davis officials in power did nearly nothing to make such changes. Obviously, this was extremely disappointing to all who had worked on the letter and devastating to the state of our climate and the world, which as we all know is deeply affected by each individual community. But passion, dedication and persistence are the marks of change and we must continue the fight for a livable future and the life of the beloved planet we all call home.

So, we write again, and again we hand over a list of demands compiled by youth leaders and community members for climate action. We will not take no for an answer, for it cannot be the answer when the only option left to us is action! Leaders of Davis, you must make changes now. You have no other choice and you lose the faith and respect of your children and your peers for every moment you remain ineffectual and silent. The word “leader” by definition is a person who has commanding authority or influence, and that leaves absolutely no excuse for inaction.  This cause, the need to effectively address the climate crisis, surpasses all others in both its necessity for swift initiative and its catastrophic eminent consequences.

We have come together, organized and taken action for this cause and so must you. Let Davis be the leading force in our county, in our region, nay in our state. Let us become a town of grassroots, radical and imaginative innovation. Let this list of demands be only the beginning of great and heavily influential change. You must act now, we will not accept anything less, and no matter your response we will continue to rise up. You have not heard the last of us. We have a mighty voice.

We issue these updated demands and request that they be immediately incorporated into the draft 2020 City of Davis Climate Action and Adaptation Plan:

Please refer to our previous demands submitted in 2019 and 2021 as well.

We welcome the opportunity to discuss these and other climate action priorities as soon as possible. We can be reached at Davis@fridaysforfutureusa.org.

**an additional 25 youth signed this letter at today’s march; their signatures will be shared with the City Council when an updated version is delivered on Tuesday’s regularly scheduled city council meeting)