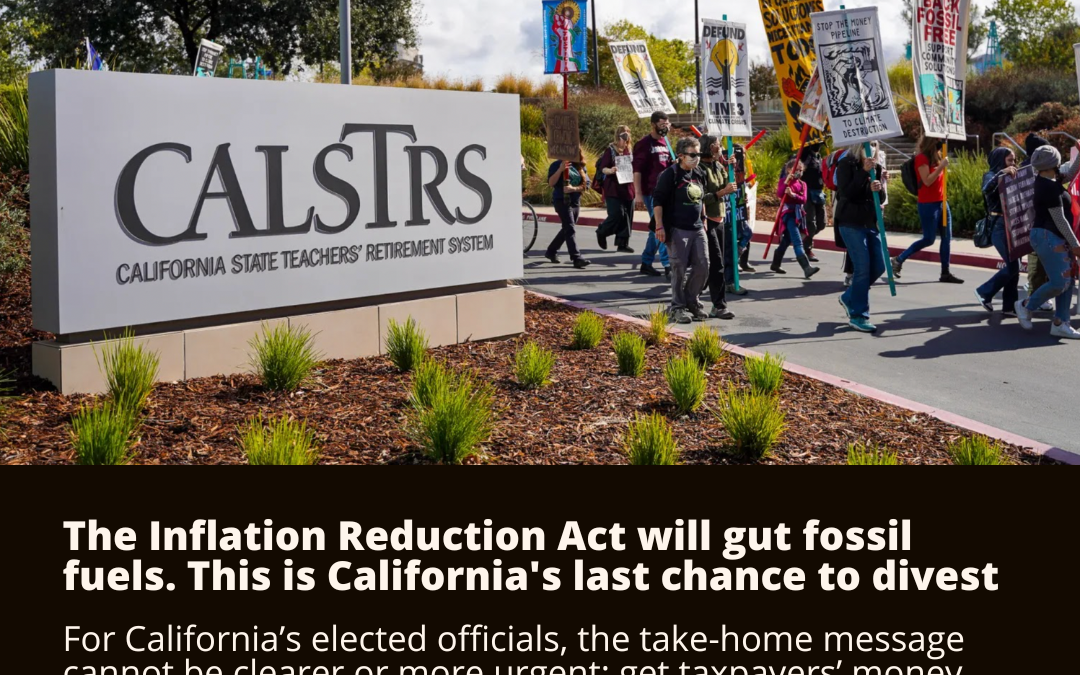 The Inflation Reduction Act will gut fossil fuels. This is California’s last chance to divest.

With the U.S. Senate recently giving the Inflation Reduction Act the green light, Congress is poised to pass a once-in-a-generation climate bill, full of incentives for Americans to switch to cleaner energy. All accounts suggest this bill will transform the nation’s energy systems.

For California’s elected officials, the take-home message cannot be clearer or more urgent: get taxpayers’ money out of fossil fuels before it’s too late.

Three separate analyses of the Inflation Reduction Act all predict that the proposed legislation will cut fossil fuel pollution by around 40% below 2005 levels by 2030. How? By making clean energy cheaper than fossil fuels. In other words, demand for oil, gas and coal will crash.

For a state that has long been a leader in fighting climate change, this is welcome news. But for the country’s two largest pension funds — the California Public Employees’ Retirement System, or CalPERS, and the California State Teachers’ Retirement System, or CalSTRS — the nation’s reduced dependency on fossil fuels likely will hurt their bottom line. Why? Because CalPERS and CalSTRS are some of the largest pension funds still invested in fossil fuels — $27.1 billion and $15.7 billion, respectively.

That needs to change.

Getting our state’s pension investments — which are entirely funded by taxpayers — out of the fossil fuel industry is long overdue. For years, financial experts and analysts have said that continued investment in fossil fuels is a bad idea for long-term investors like pension funds.

Multiple studies and reports from divested institutions have shown the financial benefits of fossil fuel divestment. The most striking was a report issued last year by BlackRock, the world’s largest investment house, for the Comptroller of New York City as the custodian of the funds for that city’s teachers’ retirement system. The report looked at a wide range of divested funds and concluded that none of them found “significant negative performance from divestment but rather, have reported neutral to positive results,” adding that divestment “outperforms all other options.” Moreover, that same report found that fossil fuel stocks “consistently underperformed the broader market over the past five years” and warned of the danger of fossil fuel holdings tanking as the world transitions to renewable energy.

This stranded assets problem with fossil fuels is a concern for many major investors, including the Wall Street giant Moody’s. Just four months ago, the investment adviser urged investors to start planning “proactively” to drop fossil fuel assets despite the recent surge in prices, because even the slowest plans for transition are projected to leave between $1 trillion to $4 trillion in “unburned fossil fuel and stranded fossil fuel infrastructure.” Gas will become “completely unusable by mid-century.” The Inflation Reduction Act, which was not accounted for in that analysis, will only speed up the arrival of this new reality.

So what can California’s elected officials, particularly the Legislature, do to protect the futures of millions of state employees, teachers and their families as well as the climate? Divest our state’s pension systems from fossil fuels.

This idea isn’t new in California. For years, climate activists have pushed our elected leaders for change. All that effort finally seemed to pay off earlier this year when SB1173 passed in the state Senate.

Had the bill passed both chambers, it would have directed CalPERS and CalSTRS to stop investing in the 200 largest publicly traded fossil fuel companies and shed current investments by 2030. The state Senate passed SB1173 in May, but the bill died in the Assembly when the chair of the Committee on Public Employment and Retirement, Assembly Member Jim Cooper, pulled it, claiming it would hurt the financial security of California’s pension systems.

The reality, however, is the opposite: Allowing our state pension systems to continue their investments in industries that leading financial analysts and experts have been sounding the alarm on is fiscally irresponsible and dangerous.

True, there have been recent stock gains for fossil fuel companies, driven largely by the price spikes in oil and gas connected to the invasion of Ukraine. But these spikes are just that — spikes. Prices have already fallen to pre-invasion levels. And when the Inflation Reduction Act is signed into law, the business model of these companies, which relies on a continued high demand for fossil fuels, will no longer be a viable model.

Divestment is the most powerful, most popular, most global climate-change campaign operating today. According to the Global Fossil Fuel Divestment Commitment Database, over $40 trillion in assets under management are committed to some form of fossil fuel divestment — which is more money than the U.S. and China’s annual economies combined. Its growing popularity is testament to an increasing awareness that the fiscally sound thing to do is also simply the right thing to do. Climate-change fueled wildfires cost Californians $10 billion in 2017 and 2018, and up to $9 billion in 2020. Our state cannot afford to let climate change continue unabated.

The Legislature missed a golden opportunity to pass a defining piece of legislation this term. As Californians, we cannot allow it to do so again. We need California’s taxpayer money out of fossil fuels now before these investments poison not just our air, but our treasury.

CJ Koepp is the communications coordinator for Fossil Free California.