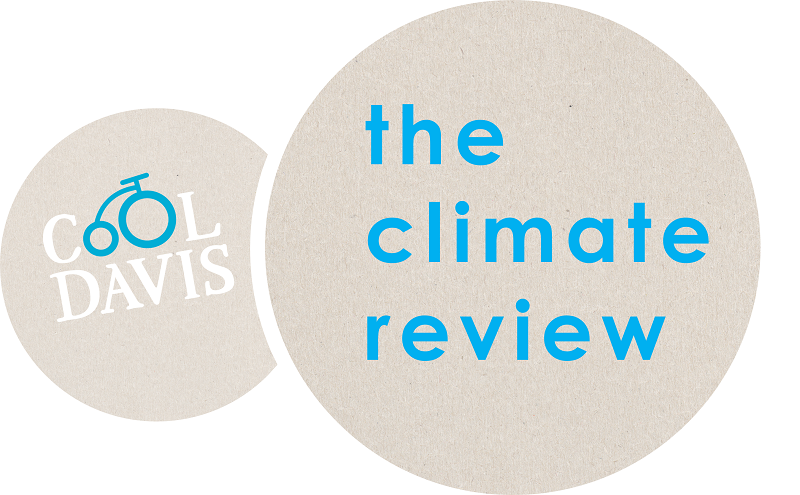 Welcome to the Cool Davis Climate Review, quotes and inspiration from a new-ish genre of books and videos … and more! Visit our Cool Solutions page for a list of climate documentaries in the Resources section at the bottom. Have a quote, summary, or link you would like to share with Cool Davis? Email newseditor@cooldavis.org

“Your greatest hope against climate change is standing beside you…Faced with the existential threat of climate change, we must draw on this essential core of human unity and come to understand that it will only be through working together that we will overcome.”

“Climate change isn’t an ‘issue’ to add to the list of things to worry about, next to health care and taxes. It is a civilization wake up call. A powerful message — spoken in the language of fires, floods, droughts and extinctions — telling us that we need an entirely new economic model and a new way of sharing this planet. Telling us we need to evolve.” — Naomi Klein

You can see the entire 755-page bill here.

“After careful study of the language of the Inflation Reduction Act of 2022, Climate Justice Alliance concludes that the harms of the bill as it is currently written outweigh its benefits. Climate Justice Alliance is opposing the reconciliation bill in its current form. We are calling on members of Congress to amend the bill to strengthen its environmental and climate justice provisions, take a stand against the expansion of fossil fuel production and the inclusion of geoengineering projects, and to reject any shady side deals that are being pushed by Senator Joe Manchin and the fossil fuel industry. Congress can’t miss the opportunity for bold action to support clean and effective climate solutions. We compiled the threats, weaknesses, missed opportunities and the strengths that are included in the Inflation Reduction Act: http://climatejusticealliance.org/ira.”

After two years of drafting, a coalition of 17 U.S. states, Washington, D.C., and the Canadian province of Quebec has released a roadmap to make 100 percent of truck and bus sales electric by 2050. … “[T]he time for bold action is now,” the plan says, highlighting ways that reducing vehicle emissions could benefit both the climate and human health. The 17 states that contributed to the roadmap — including California, Massachusetts, Hawaii, and Maine, among others — account for 49 percent of the country’s economy, 43 percent of its population, and 36 percent of its medium- and heavy-duty vehicles.