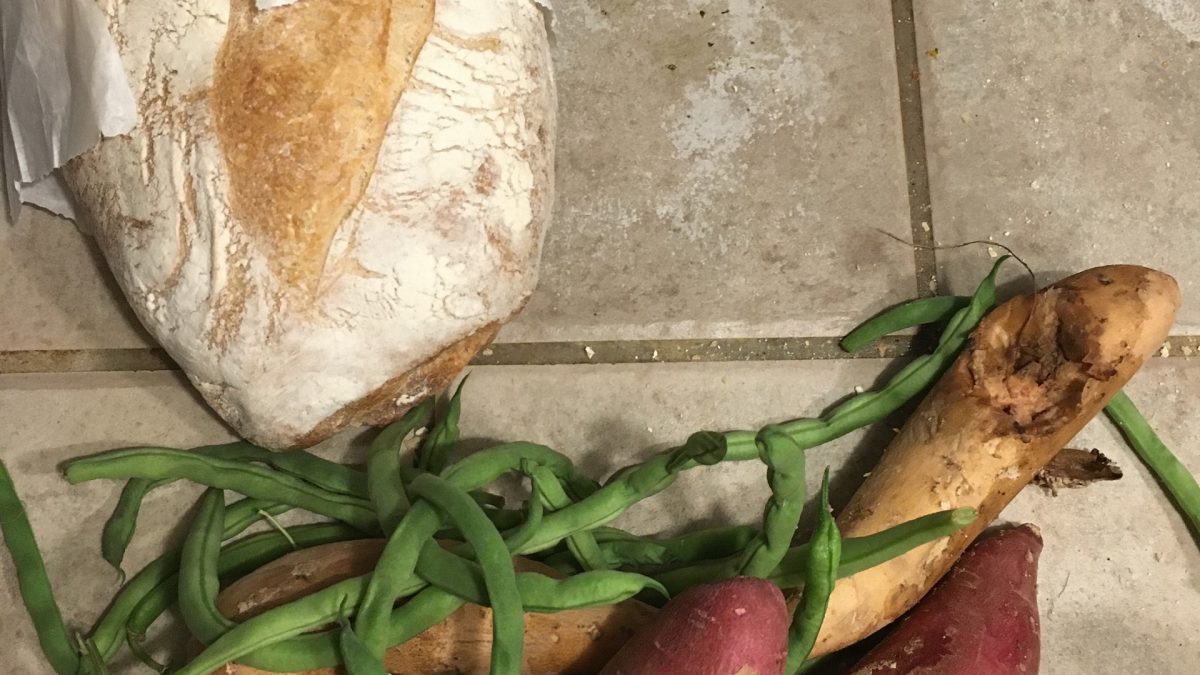 The sun has set over Central Park in Davis but the light still lingers. A woman on her bike rolls up to the fountain-that-never-was — next to the Solidarity Space — and unloads some boxes from her trailer, setting them on the level, counter-height, faux-stone structure. The legacy of Wednesday Picnic in the Park remains: several circular gatherings of three-dimensional beings, known as humans, still punctuate the air with chatter, smiles, and laughter; other groups are linear, with individuals walking along slack lines running taut between the California Sycamores by the north stage and bathroom.

“9 o’clock,” says one man with a plaid shirt tied around his waist to another, as he mounts his bike and rides away, bright plastic flowers peeking from a black milk crate as he pushes away.

I ask the man he spoke to, the first in line for the Night Market, if he might answer a couple questions. He responds, “My English is not very good” and “I don’t like interviews.” He folds his paper and declines my request. Three totes, one waxed box, and one red-and-white Igloo cooler rest on the fountain ledge, along with the man in line, waiting patiently for the woman, and others, to return. Later, I ask the second man in line if he would answer a couple questions, after identifying myself, but he simply moves a lowered hand side to side to indicate, without speaking, no.

Half an hour later, there are 17 people in line, families, singles, couples, 6 feet-ish apart from each other, as five young adults arrange bread, beans, potatoes, and muffins. Just a few moments after 9pm, the first man is invited to step up and decide what he wants, conversing with masked servers who pinch the offerings with tongs. Flashlights and phones illuminate the food and synth/electronica plays softly, heightening the feeling of serene yet purposeful energy.

A tall young man with tousled blond hair and a loose black t-shirt is called aside to speak with another who wants to donate non-perishables because he’s moving. It’s explained that he could bring it here to Central Park to the Night Market Monday through Friday between 9pm and 11pm or drop them in one of the “Freedges” around town, like the one at the Davis Food Co-op. I hear someone say, “If it’s lemon, I want more.”

Finally, I get in line, which is huge since I hate lines. As others have pointed out to me, there’s a taboo, a shame, a hyper sense of self-consciousness one feels when getting in line to receive for free something you normally pay for. Be real: it’s mixing with the homeless and the hungry. There are families in line, a group of middle-aged professionals speaking Spanish, and couples, there, too. I hadn’t had dinner, except for a pint of porter earlier, and if I wanted to experience this thing, I better do it. I figured they would have some good stuff. I also know if the food isn’t given away completely, which often it isn’t, it will be delivered to a Freedge. More rationale: maybe I could still get some quotes this way. 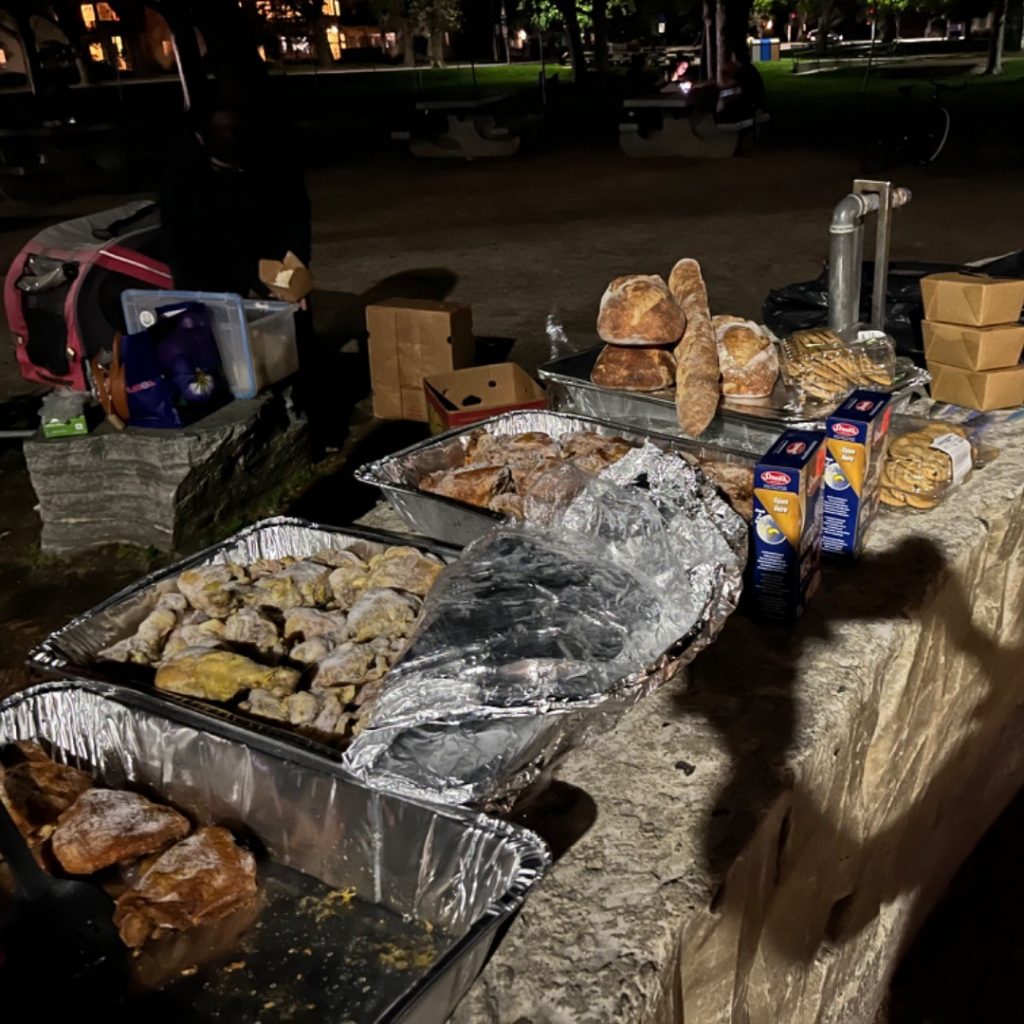 I look back at the man who had queued up behind me in line, who turned out to be the man who had rolled away on his bike earlier. I say, hi, he looks up, and a moment later he offers that he’s almost out of his storage unit and then he’ll be on his way home. I asked a question, and he scowls, snaps back at me, repeating the answer, as if I should already know, didn’t I hear him, then pauses, and repeats the story of his day and what’s next in his life. I won’t share the details because I didn’t ask for permission. I’ve shied away from the idea of interviewing a recipient. My intended question, “How has The Night Market impacted your life?” seems now like a trite intrusion. Good luck, the man says with recrimination, meaning to everyone, not just me.

I don’t ask for an interview even though he says he’s written for national magazines. He noticed I was taking notes earlier and knew the updated enrollment numbers from UC Davis. When he mentions the mayor of San Francisco, I do have the courage to ask what he thinks. The state housing initiative did not deliver as promised is one of several points he makes. He’s heard of Cool Davis and knows what we do.

Our conversation makes the wait go by quickly and now I’m up, first in line. I’m glad I spoke with him and he with me. We exchange names before I dive in, and when we reach the end of the food line, I say, “Nice to meet you.” He reciprocates. I think he would have liked to chat for a while and would have gone on the record even, but I’m tired, and unsure now. I catch a glance down at the pavement from him that I interpret as regret, in my own context, meaning, of course, yes, he would have let me interview him. It’s only 9:26pm my phone tells me a moment later, but I’ve been out since 8am.

It’s time to go home with my loaf of day-of crusty bread larger than the one I paid $11 for a few days prior. I also have two sweet potatoes, two yams, and a handful of green beans, all a bit limp, but no doubt still delicious. A great find for anyone who has a kitchen to cook them. All the muffins were gone when my turn came. Cody Watson, who says he’s been around since the beginning but just plays a supporting role these days, answered a few questions about the Night Market via email.

Q: How does the Night Market affect lives?

A: I believe the night market affects lives in a few ways, for those served that are food insecure it provides some food security and reassurance that they are part of a community that cares about each other. For those food secure that come regularly or stumble upon us, it provides inspiration and an example of mutual aid work in their community. For the volunteers, it provides comradery and builds deeper friendships, as well as training in food recovery and service we hope they will take with them wherever they end up.

Q: How does the Night Market contribute to community resilience?

A: Night market contributes to community resilience by distributing 100s of pounds of GOOD food per week that would otherwise be treated as waste, offsetting food insecurity. In addition, it acts as an example of how local, grassroots organizing can solve problems unmet by government and traditional NGO policies and programs.

Q: What is your role and why do you do it? How has it affected your life?

A: On a regular basis, I volunteer one night a week to pick up and distribute food via bike and bike cart (about a 3 hour commitment). Night market is 5 nights a week (M-F) and generally there are two volunteers per night. More broadly, I have been doing night market since near its inception, and play a role in supporting the grassroots organization by attending meetings and coordinating with prospective food donors and volunteers. It’s important to note that even those of us that have been doing the night market for years do not hold more power or have more sway than the newest members. We are always excited about the experience, perspectives, and ideas everyone brings to the table.

Q: What motivates the current group of volunteers?

A: I think what motivates everyone is a fair balance of two things: believing that acts of mutual aid helps to build a healthy and resilient community; and believing that ‘food waste’ reduction and diversion is important. To put it frankly, the fact that people go hungry while we waste about 1/3 of our food (US) is untenable.

Q: What does the future look like? Do you need more volunteers and donations especially right now?

A: I think the future for the Davis Night Market looks a lot like what you see right now, a group of volunteers sharing the load to provide food to anyone that wants it on a regular basis. Davis is characterized by an influx/outflux of people related to the university; as many of the volunteers are university students or employed, we constantly see a changing of the guard per se, and welcome it. I also hope the future includes more local restaurants and grocery stores donating to the night market! We are always looking for volunteers in many areas, marketing/ social media, recruiting restaurants/ other donors, leading pick ups and night market nights, etc. Night market donations we’re most interested in is prepared food from restaurants or veggies. For pantry/ non-perishable foods we encourage people to donate to the Freedge (free community fridge) program (see links below).

From the website: The Davis Night Market was established in 2019 in Davis, CA. Our mission is to reduce food waste and increase food security in Davis while fostering a sense of community.

The Davis Night Market recovers food that would otherwise go to waste from Davis restaurants, bakeries and grocery stores, and make it available for anyone in need. We strive to maintain sustainable practices throughout every step of our project implementation.  We use bikes equipped with carts to transport food so as to minimize our carbon emissions and promote the use of bicycles as transportation. We also aim to repackage food in the least wasteful and most sustainable way, by using only compostable packaging. We strive to promote community ties and growth by creating a welcoming environment with music, colorful lights, and a safe space for people to interact. We want to make our service is attractive to food insecure individuals who might not otherwise participate due to the stigma associated with food donations.

Looking for a way to get involved with The Davis Night Market? Check out our different opportunities below. Whether you’re looking to donate food or money, or would like to volunteer in your free time, whatever help you can give will be highly appreciated. Contact one of our staff members to learn more about what we’re looking for.