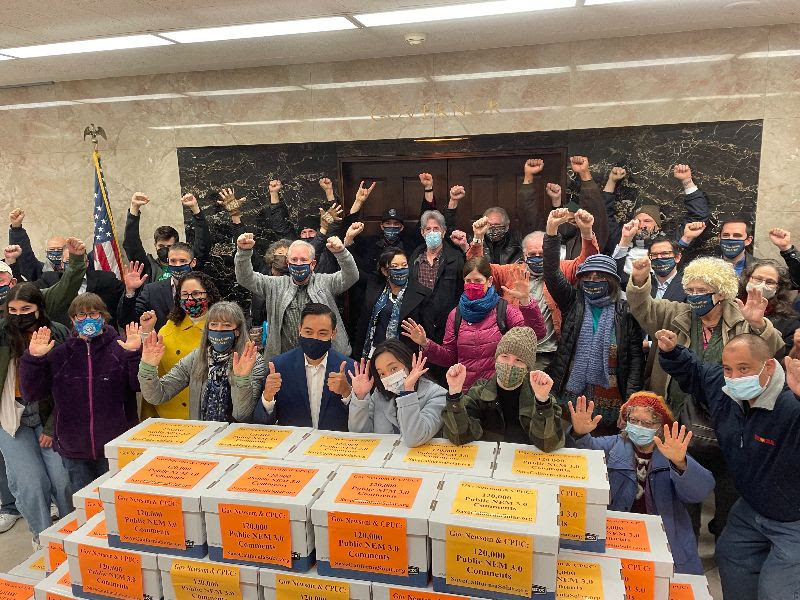 Updates: Protests are planned for the January 13th 2022 to coincide with the next voting meeting of the CPUC (agenda link). Save Our Solar Jobs Rally information (San Francisco and LA): https://calssa.org/calendar/2022/1/13/save-our-solar-jobs-rally

Read public comment on the proposed decision by Ahmad Faruqui that lays out problems and better steps forward (shared by Lorenzo Kristov): http://ahmadfaruqui.blogspot.com/2022/01/my-comments-on-cpucs-proposed-decision.html

A message from Dave Rosenthal and the Save California Solar campaign:

Monday Dec 13 2021: The California Public Utilities Commission released their proposed decision on net metering today, and it appears that the CPUC has sided with the utilities.

The bottom line: If the proposed decision is approved by the CPUC, it will make solar and batteries too expensive for middle and working class people. The CPUC is scheduled to make a final decision on January 27th. The decision would take effect four months after the vote (May 28th).

This, even after hearing from 120,000 members of the public and over 600 nonprofit organizations, community leaders, affordable housing advocates, faith leaders, elected officials, schools and municipalities.

More analysis to come shortly, but the topline details of the CPUC’s proposed decision are as follows:

1) Highest solar penalty fee in the U.S.
If you put solar panels on your rooftop, you will be charged on average $57 / month on average.

2) Massive cut to the credit solar users receive for the extra energy they produce for the community.

3) These changes will be retroactive on existing solar users.

The current 20-year protection for solar users on “NEM1” and “NEM2” will be reduced to 15 years.

The bottom line: Most middle and working class people will not install solar if these changes go into effect. That would cause the rooftop solar market to significantly contract, putting tens of thousands of jobs on the line.

The window-dressing in the proposal

As expected, the CPUC included items intended to make it seem like they are helping more working class people afford solar. For example, they exempt some low-income people from the solar penalty fee, and also offer a temporary subsidy for ten years (unless you happen to live in SDG&E territory).

These items are window-dressing. The CPUC’s “incentive” would only partially offset the other changes, making it on the whole worse for working communities than the status quo.

Groups like CALSSA and Protect Our Communities Foundation and Vote Solar have already laid out how to actually increase solar access in working class communities. The CPUC chose to ignore those substantive proposals.

Halting our solar progress hurts jobs and small businesses at a time when California desperately needs more of both.

What we need to do next

The top thing is to flood Governor Newsom’s office with calls. Like hundreds every day. His number is 916-445-2841.

A sample message could be:

“My name is ___. I live in ____. I am strongly opposed to the rooftop solar proposal released by your Public Utilities Commission. California should not charge people penalty fees for putting solar panels on their rooftop! If you are serious about helping people control their energy bills, avoid blackouts and fight climate change, you need to encourage MORE people to install rooftop solar. Governor Newsom, this is on you. We are watching what you do next. ”

You can also email the Governor.

What to expect from the campaign

More analysis will come tomorrow, along with more resources to mobilize and take action.

The comments were gathered via the this Solar Rights Alliance portal:

The fight has now truly begun. We are sharing this photo from our delivery event on Wednesday December 8, 2021, to provide inspiration! See below some recent editorials to remind you that the facts and the people are on our side.

Sacramento Bee: “Everything about this cynical, corporate-driven argument stinks”

The Sacramento Bee editorial board:

“The push for rooftop solar reforms has nothing to do with ideology or classism or systemic inequities. It is about companies trying to manipulate the public into believing that democratized clean energy production is bad for the state. The CPUC should not once again bail out corporations like PG&E, which has routinely scorched olive branches it never deserved. Why would California give it another?”

LA Times editorial: “So it’s a bit of a head scratcher why Gov. Gavin Newsom’s administration is preparing to make it harder for Californians to go solar.”

Thank you so much for all you do to make the world a better place for everyone!