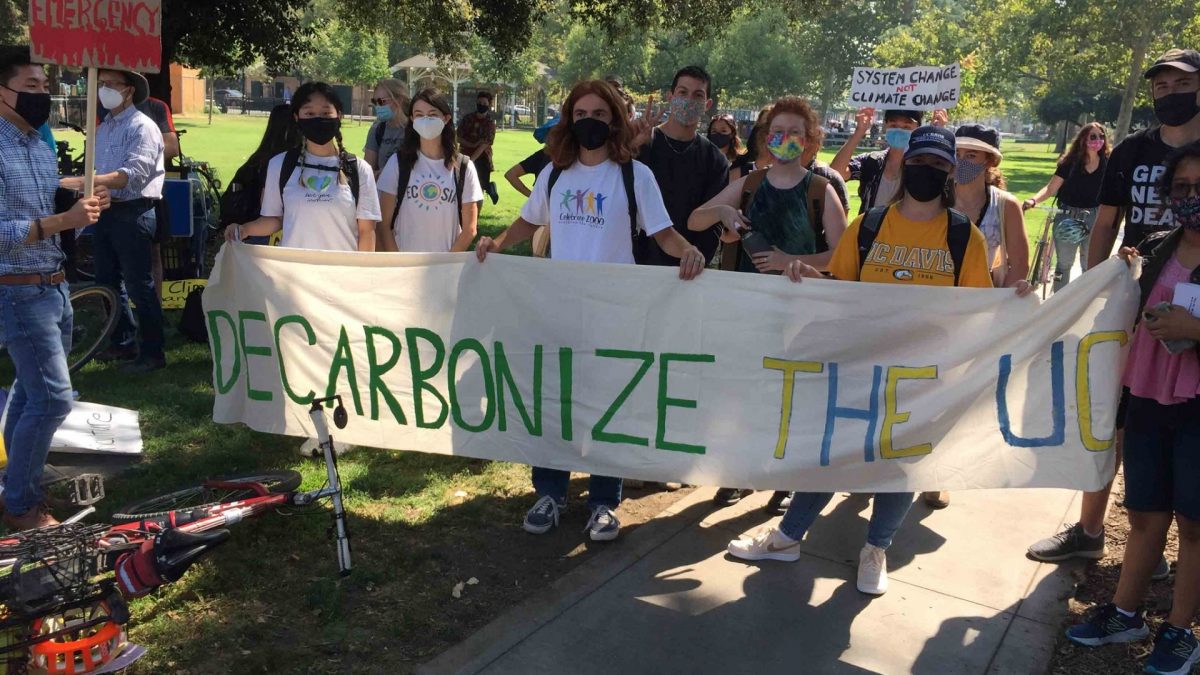 As the United Nations-sponsored COP26 climate conference begins in Glasgow, UC Davis faculty, staff, and student activists today announced a petition and educational campaign asking the university to commit to ending fossil fuel use by 2030. The petition also asks that specific policies for doing this be adopted by the end of 2022.

Although UC Davis has made progress in improving the energy efficiency of its operations and buying cleaner electricity from off-campus, annual on-campus emissions from Davis and Sacramento campuses have remained steady at about 150,000 metric tons of CO2 since 2008. Most of these emissions are due to the university’s large methane-fueled heating and cooling plants. 56% of campus energy use continues to be generated directly from fossil fuels, mostly fracked methane. Climate activists ask that heating and cooling systems be electrified using renewably generated electricity.

UC Davis installed a 16MW photovoltaic array in 2015 which provides about 11% of campus electricity. The university is also converting campus heating and cooling pipes from steam to hot water in a program called the “Big Shift,” a step that will make electrification easier. But the campus has yet to commit to ending fossil fuel use. In a recent message to the Chancellor, activists said “The Big Shift is just one step in the right direction. Other steps need to be identified asap, and UCD commitment to ending fossil fuel use articulated.”

According to data released by the University of California Office of the President following a Public Records Act request, on-campus (Scope 1) greenhouse gas emissions have remained steady at most UC campuses since the late 2000s. Credit: Adam Arons and Eric Halgren

The UC system has committed to reaching carbon neutrality by 2025 for on-campus emissions and purchased power. But while purchased electricity has gotten cleaner, on-campus emissions have yet to fall at any UC. To meet the 2025 goal, campuses plan to buy carbon offsets, which claim to reduce GHG emissions elsewhere in the world.

However, there are major questions whether offsets would represent permanent and verifiable GHG reductions that would not have occurred otherwise.[1] The UC Office of the President has so far been unable to identify nearly enough offsets for UC campuses. Activists ask that campuses instead end fossil fuel use and commit to electrifying operations.

A model for campus electrification is Stanford. The Stanford Energy System Innovations (SESI) project has cut campus GHG emissions by approximately 68% and campus potable water use by 18%, while reducing lifecycle heating and cooling system costs.[2]

The Fossil Free UCD campaign aims to reach out to all campus stakeholders including faculty, students, staff, and alumni. According to Professor Mark Huising of the Departments of Neurobiology and Physiology, “If UC Davis wants to do right by the communities we serve, we should lead by example and electrify our campus instead of burning fossil fuels that worsen our climate emergency.”

English Department Professor Elizabeth Miller commented that “”For our students today and our students tomorrow, we must prioritize decarbonization and lead by example, putting young people’s futures first and eliminating the use of fossil fuels on campus.”

According to Professor Emerit Roberta Millstein, “The recent IPCC report makes clear that are situation is dire and that partial measures are not enough.”

UCD alumna Christine Shewmaker said “I encourage my fellow UC Davis alumni to join me, along with students, faculty and staff, in urging officials to commit to eliminating natural gas from campus operations by 2030.”

UCD staff member Brianna McGuire added that, “Climate change is already affecting UC Davis workers at home and on campus. In a survey of UCD workers in the University Professional and Technical Employees (UPTE) union, 87% of respondents said they have had to cope with climate change-related smoke impacts. UCD needs to reduce fossil fuel use and implement a just transition for impacted workers.”