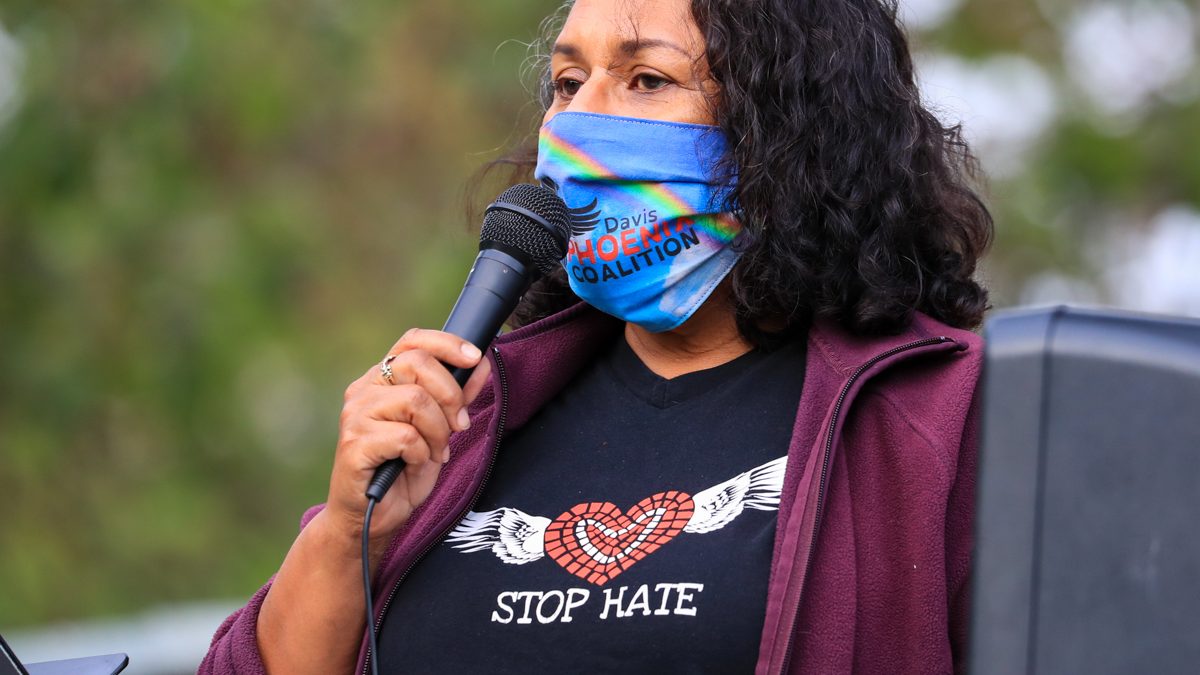 Editor’s note: The following is a nearly complete excerpt from a Davis Vanguard article dated October 21. The related ideas at the end of the article may be accessed by reading the full article. Cool Davis sees the work outlined below as an important step in strengethening community resilience and therefore directly related to our work.

Davis, CA – What did the actions by the council mean to Mayor Gloria Partida?  It was after midnight on Tuesday night and she went out onto her porch, and took a photo of her dog stating, “How do you celebrate a win in a lifetime of trying to make things right?”

As someone who has been in this fight for over 15 years now and who knows the agony of standing in the parking lot of the city hall at 3 am wondering what to do next (apparently it was start a new career), I know how she feels.

I was in high school, about to graduate, when Rodney King was beaten, and I marched in college as a freshman at Cal Poly when the cops acquitted him.

Martin Luther King famously has said, “The arc of the moral universe is long but it bends toward justice.”

While the scales of justice will barely tip from what happens in Davis, I definitely felt a twang.

“Today I am looking back on almost 50 years of listening to activists question community power structures, and asking how to rebalance those structures to lift the most vulnerable out of poverty and incarceration,” Mayor Gloria Partida said.

“I am incredibly proud to today to be at this end of it,” she said.  She was especially grateful to the staff “who understood that what we needed was how to get to ‘yes’ and made that happen.”

She noted that included the police department.

“Our community continues to reaffirm that we are a city that will not accept the status quo when it comes to standing up for what is right,” she added.  “There are many councils that would have found this too much of a reach.”

It was 15 years ago that the city council voted 4-1 to shut down the Human Relations Commission for advocating a civilian police oversight committee—almost identical to the one they finally implemented in 2017.

It took the 2015 deaths of Michael Brown and Eric Garner, among others, to re-awaken the outrage that we had in 1991-92 with the beating of Rodney King.  But it was the death of George Floyd and Brianna Taylor, among others, that finally produced action.

It is easy to dismiss the moment.  But what we have seen in Davis is this isn’t simply a few dozen activists.  Last year, over 1000 people marched for change.  Over 700 people in April of this year signed the letter urging the council to support the Nine.  Over 100 people turned out for public comment last December.

What is more, there has been almost an entire lack of protest.  When the council shut down the HRC in 2006, over 100 people spoke and it was probably an even split.  Leading the way at that time was the DPOA.

This time around—not a word of dissent.  Not a single public comment.  Not an email to council.  Nothing from DPOA.

If the public is not behind these simple but important changes, then they have remained silent through it all.  On Tuesday, with the most sweeping changes yet, nary a murmur of protest echoed across the land.

Is it meaningful the change we have seen?

Some of it is surely symbolic.  Having another agency other than the police handling homeless services is probably more of a symbolic move.  Ryan Collins has generally drawn praise across the board.

“Some of the things that we accomplish here go far beyond the police reform issue, but I think are clearly helpful there too,” Dan Carson said, noting that many of the upgrades could help make progress on issues like affordable housing.

Having an affordable housing advocate is important above and beyond the need for police reform.

Like removing the homeless coordinator from police, removing things like code enforcement and mental health services are very important.

We have asked our police to do way too much.  The biggest change probably came in September, however, when we approved the CRISIS NOW model.  As someone who unfortunately had a child last year with severe mental health challenges, calling the police in an emergency was the only real option.

The problem was the police really lacked the tools to resolve the crisis.  This is not even a criticism of them—they came, they were kind and caring, but limited.  I was always living in fear that the situation would escalate and turn out badly.  But in the end, what he needed was not an armed police officer but a professional counselor/social worker who had the skill and training to calm the situation without the use of or threat of force.

We did not have that option in 2020—in 2022, we will and that is better for everyone, including the police who mean well but know they should not be the ones handling most situations.

You always have the option of having police come if there are weapons or the threat of violence involved.  But from the experience of CAHOOTS in Eugene, that happens about three percent of the time.

While these changes are sweeping, there is more work to be done for sure.

By David M. Greenwald
Executive Editor of the Davis Vanguard

department of social services and housing justice
SUPPORT US