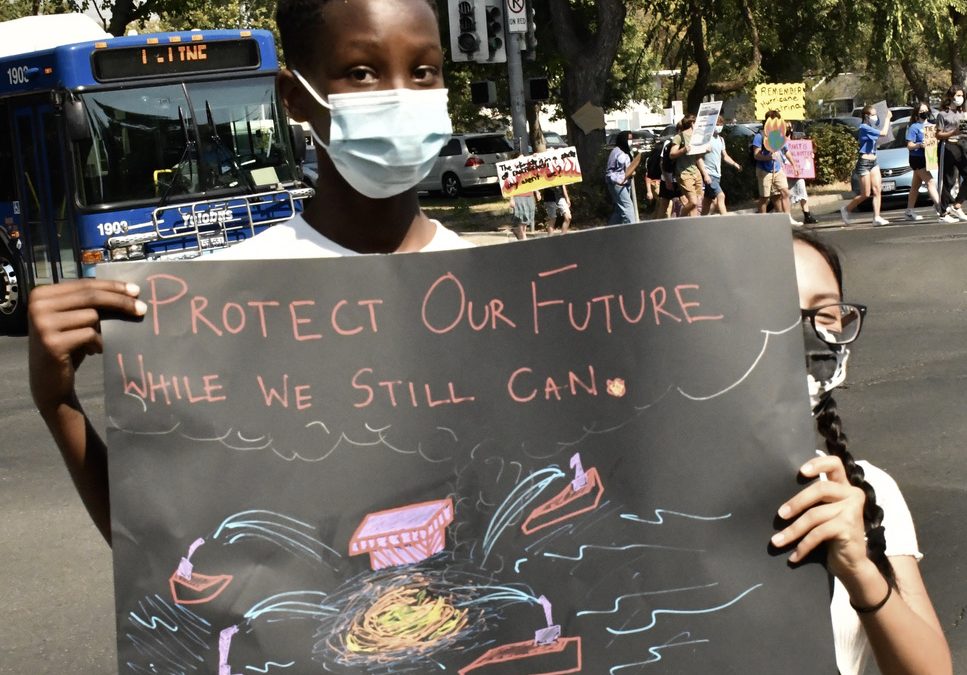 Greta Thunberg and the impressive worldwide youth group she founded, “Fridays for Future,” called a second global Climate Strike on Friday, September 24th, 2021.   This was not a light-hearted publicity event, but rather a somber and thoroughly researched warning to all countries to take immediate actions to curb CO2 emissions. Unfortunately, since millions joined the September 2019 climate strikes, the burning of fossil fuels has accelerated, and our climate has grown more erratic and dangerous. Our climate is increasingly unlivable as wildfires, flooding, and intense heat waves cause damage and deaths around the globe.

Despite the serious purpose of the Climate Strike, the Davis climate strikers were actually happy to meet together at Central Park at the corner of 5th and B Streets with their hand-made signs.  Covid had kept us apart for over a year, and at last we could be outside together again, carefully socially distanced, to engage with the steady stream of drivers and lunch-time passers-by.

Our eclectic group consisted of a homeschooling cluster, one raging Granny without her costume, a handful of dedicated Davis folks who always make the effort for climate actions, a handful of folks from the faith community, one city council member who consistently turns out for climate events, our excellent photographer Johan, my organizing partner Scott, and a handful of other fellow activists.  We waved our signs and most drivers acknowledged us with an encouraging wave or beep.  It was rewarding and we relished the camaraderie.

Only one driver disliked our message so much that he snarled and drove around the block to drive by and growl again, honking his horn in protest.  A climate denier?

Fifteen teens from the Davis High School Ecology Club showed up on foot with signs halfway through the strike!  Their boost of energy made us a legitimate youth Climate Strike group and energized our engagement with traffic passing by.

Not long after, another youthful band waving signs approached from UCD, the Climate Reality Project members and other supporters.  They immediately used their urgent signs to relate to drivers and boldly committed to strike on that corner every Friday at noon!   Their leader this year, Natalie Aguilar, said, “As a second year at UC Davis, having my first year completely online from home, I had forgotten the thrill of meeting together with peers with a common goal. In this case, it was calling for action from UC Davis, and the City of Davis to decarbonize and electrify. I enjoyed chanting together, ‘What do we want? Climate Justice!’ as we headed up Third Street to Central Park. Although I hadn’t even explored downtown Davis until the Climate Strike, it was a warm, welcome place ready for change.”

Why did millions of children and adults across the world make the time to strike in solidarity on September 24th, abandoning school, work and other responsibilities?

The answer on the Fridays for Future website is compelling: “We strike because we have no choice. We are fighting for our future and for our children’s future. We strike because there is still time to change, but time is of the essence. The sooner we act, the better our shared future will be. ”

Their urgency is further explained, “We need to act right now to stop burning fossil fuels and ensure a rapid energy revolution with equity, reparations and climate justice at its heart.” The website includes live talks by youth from countries like the Philippines where the changing climate is already devastating the social fabric of their society.

For those who need the science, the earth is already warming. In the 2015 Paris Agreement, countries committed to limit the long term temperature increase to 1.5°Celsius to assure fewer climate-related risks for natural and human systems. We are fast approaching that 1.5 limit and may reach it as early as 2030.  Already higher levels of warming are causing worse heat waves, more droughts and floods, and higher sea level rise, causing destruction to the earth we leave our children. While these effects will impact everyone, rich and poor, they will be most devastating to our most vulnerable: the poorest and youngest people.

Fridays for Future calls on all governments to do more to limit warming for the sake of all those already suffering, such as coastal peoples, farmers, indigenous people, and many others.  They explain that scientists believe limiting warming is still possible.

“With renewable energy technologies, changes in farming and transport, and other big changes, we can limit warming and avoid even worse outcomes.”  Fridays for Future youth protest in the streets to get leaders to try!

Please stay tuned for the next Davis climate action set for October 29 at Chase Bank.

Lynne Nittler is a local activist and lifelong environmentalist. She was a founding member of Cool Davis and served as the board Secretary for six years. She continues as a contributing writer and active collaborator in her role with the Yolo Interfaith Alliance for Climate Justice, a Cool Davis working group which sponsors many community climate events. She played a significant role in stopping twice-daily, 100-car trains of explosive tar sands oil from Canada coming through Northern California to Bay Area refineries in 2014-16, regularly organizes and/or attends protests at the capitol and in town, sings with the Davis Raging Grannies, organized eight Interfaith Climate Summits and innumerable evening speakers, films, concerts, reading and discussion groups, assisted youth in the 2019 Youth Climate Strike, and is currently active with Fossil Free California urging the divestment of CalSTRS and CalPERS pension funds  from fossil fuels, among her many passionate efforts to stem the tide of climate change.